The fraternity is part of the National Pan-Hellenic Council (NPHC), commonly known as the Divine Nine. The NPHC is composed of nine historically Black fraternities and sororities, many of which were founded at historically Black colleges and universities (HBCUs).

While NPHC fraternities and sororities have been a part of our campus community in the past, Fraternity & Sorority Life (FSL) has been working with the NPHC to bring the Divine Nine to campus permanently. In addition to the various opportunities that all students have to join the Greek community on campus, organizations like Omega Psi Phi create additional space for the university’s Black students to feel stronger senses of belonging, inclusion and engagement.

Of the nine organizations in the NPHC, Omega Psi Phi is the first to formally join CU Boulder as a Recognized Social Greek Organization (RSGO). Signing a RSGO agreement allows the fraternity to recruit on campus, access campus resources for programs, events and trainings, and partner with other Greek life and campus groups, among other benefits. The agreement also includes provisions to follow university policies.

Here are four things to know about Omega Psi Phi Fraternity Inc. and the NPHC.

Omega Psi Phi made history when it was founded

Of the nine NPHC organizations, Omega Psi Phi was founded fourth in all. Here are the founding dates of all nine organizations:

The NPHC was officially organized and started bringing the Divine Nine together in May 1930 at Howard University. The nine organizations joined the council at different times from 1930 through 1997.

The Chi Phi Chapter of Omega Psi Phi was first organized in Denver in 1927. During this time, there were several detached members of the fraternity living in Denver. After a series of settings and approval of the national organization, the members established the Denver chapter on Dec. 27, 1927.

There are now four Omega Psi Phi chapters in Colorado:

Omega Psi Phi’s motto is “friendship is essential to the soul.” Potential members know that they will find lifelong relationships and a strong brotherhood when they join the fraternity.

Members also strive to succeed academically and professionally, with a focus on uplifting their communities. On a national level, graduate chapters provide financial assistance to students and the fraternity has a college endowment fund that gives at least $50,000 to HBCUs each year.

On a local level, Omega Psi Phi members facilitate and participate in programs to support voter registration, Assault on Illiteracy, Habitat for Humanity and mentoring. The fraternity holds an Achievement Week each November to recognize members who have contributed to community uplift.

How to get involved with the National Pan-Hellenic Council

If students want to learn more about joining Omega Psi Phi or another NPHC chapter, please fill out this NPHC Interest Form. Fraternity & Sorority Life will then contact you with more information.

There will be a NPHC Meet & Greet in the spring semester on Jan. 24, when students can meet members and representatives of the NPHC and ask questions. Students can also follow @cubouldernphc on Instagram to hear about additional NPHC events. 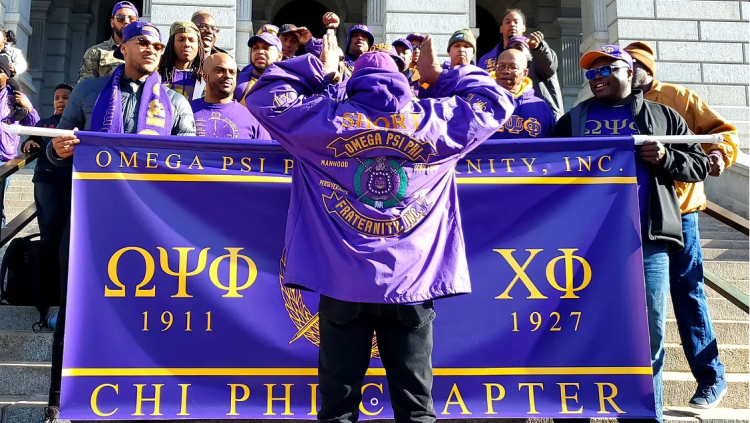 Photo courtesy of the Chi Phi Chapter of the Omega Psi Phi Fraternity.

In addition to Omega Psi Phi being a RSGO, four other NPHC chapters are currently recognized at CU Boulder with provisional status: