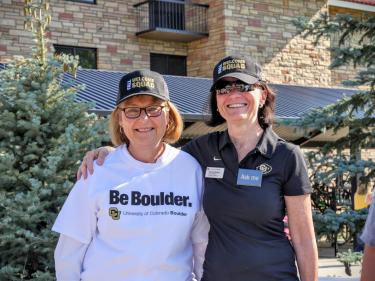 Frances Draper won’t soon forget the day she started working for the University of Colorado Boulder. It was Valentine’s Day 2011, and she had just accepted her next big move: leading campus communications for one of the country’s top public research universities.

Before then, her professional path had included stints as a legislative assistant in the U.S. Senate and in banking, risk management, and managing the Sun Microsystems business and finance line at General Electric. She also led the Boulder Economic Council for five years, established its annual Boulder Economic Forecast event and Boulder Economic Summit, and was a key figure in establishing CO-Labs, a consortium of Colorado-based research laboratories.

When she accepted the role of vice chancellor for strategic relations and communications, she knew it would be an intriguing, and sometimes challenging, foray into higher education administration. It  would take careful collaboration––and a bit of cajoling, bargaining and good humor––to unify the university's reputation and brand under a single umbrella.

“Creating significant change in an organization, especially when you come in from the outside, is always harder and a little more difficult when you are a woman," admits Draper, a New Mexico native and Stanford University graduate who returned to the Rocky Mountain West to raise her family. 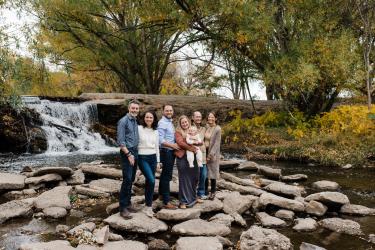 Her latest role as senior advisor for strategic partnership, public policy and community relations in the Office of Government and Community Relations turned out to be the capstone of a distinguished career that has garnered recognition for her, including the Boulder Chamber's 2019 Women Who Light the Community award.

As she retires today after more than a decade of service to CU Boulder, she will remember the colleagues, mentors, friends and CU and city leaders who supported her along the way. Still, the time has come for her to leave behind the workaday world and to become a full-time member of the community she calls home. After years of working to strengthen the "town-and-gown" relationship, it is fitting that she broke the news about her retirement during a virtual March 10 meeting between CU Boulder and city leadership.

“Boulder has been my home for more than 30 years," Draper says. "And this talented city and top university have a unique environment and relationship from which amazing partnerships can be built to meet the challenges we are facing."

One of those challenges has been determining how best to develop CU Boulder South, a 308-acre parcel of land southwest of U.S. 36 and Table Mesa that the university owns and where it would one day like to build housing for faculty, staff and upper-division students on 129 acres. If annexed by the city, CU would donate 80 acres of its property free of cost to the city for flood mitigation and open space. 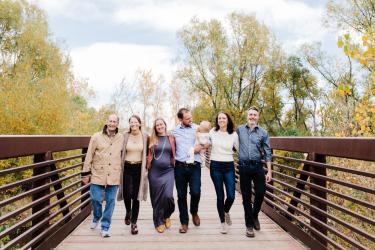 Joining Draper in leading the university's CU Boulder South discussions with city leaders for nearly four years has been Derek Silva, assistant vice chancellor for business strategy. The duo and their partner Kim Calomino, director of local government and community relations, have sought an annexation proposal that is mutually agreeable to CU and the city, staffing many late-night Boulder City Council meetings and collaborative work sessions in the process.

Draper's business acumen and experience came into play while advocating on the university's behalf, and Silva says working alongside her on the project has been a highlight of his professional career.

“She’s brilliant, perceptive, tough, kind and dedicated,” Silva says. “While she is not a physically imposing figure, her being is luminous and indomitable. I am grieving her retirement and the winding down of our working relationship, but count her as a dear friend and will seek frequent opportunities to nurture our friendship."

Silva and Calomino, along with Abby Benson, associate vice chancellor and chief of staff for Strategic Resources and Support, will pick up the baton and carry these discussions forward with the city. 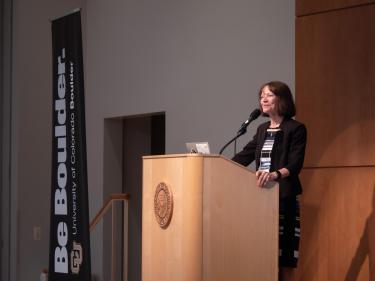 Fostering a stronger relationship between the university and the city of Boulder was another key aspect of Draper's work at CU. A proven tactic included co-hosting biannual luncheons that brought university and Boulder leaders together to break bread, chat informally, and update each other on mutual interests and concerns.

In fact, says former Boulder City Manager Jane Brautigam, Draper garnered the trust of elected and appointed city officials and turned “relationships that had been cool and guarded into ongoing collaborations and partnerships.”

“She is the trusted representative and steward of the relationships between the city and the university,” Brautigam says. “Frances speaks with frankness and honesty, even when the message is difficult to receive, and in doing so has helped us all understand, face and resolve the issues that divide us.”

Calomino, who worked closely with Draper to build stronger community ties between CU and the city of Boulder, describes Draper as a "study in calm under pressure and clear thinking, even while in the hot spotlight." 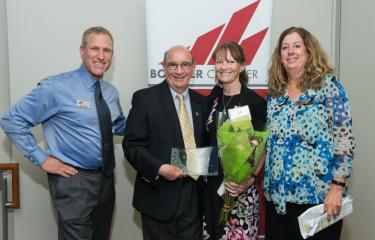 "She mentored, guided and ultimately trusted me as her partner and supporter. I was a novice in this world of higher education, let alone in the massive organizational structure that is CU Boulder, and an unknown in the Boulder community," Calomino says of her former manager and friend. "She helped me become a trusted resource on campus and in the community. Besides loving her as a friend, I love her as anyone would the leader who helped them spread their wings."

Among the most valuable things Calomino learned from Draper is that success can be achieved by arriving at the work-table with solutions to resolve difficult problems. In the end, good listening with a dose of humor, can lead to a win for everyone at the table.

"Frances’s saying, ‘There’s a pony in here for everyone,’ captures her good humor and her spirit of goodwill, and she is right. You just have to listen and work together," Calomino says.

John Tayer, president and CEO of the Boulder Chamber, expressed gratitude for Draper’s strategic guidance, passion and “excellence in all we did together.”

She has been “an effective champion for the University of Colorado’s goals, but even more, she has been a champion for our Boulder community and the type of town-gown relationship that advances mutual interests," Tayer says. 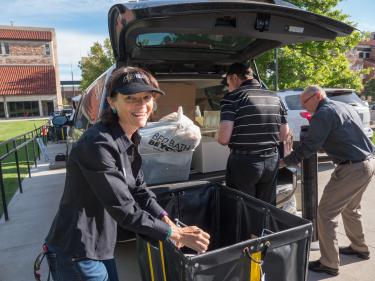 In addition to her work in the Boulder community, Draper will also be remembered for the initiatives she led to develop a central communications unit on campus that offers guidance and services to the university's colleges, schools, research institutes, and academic and administrative units to ensure collaboration, consistency and overall reputational success for CU Boulder.

"People know there is a place for them to go for help," Draper says of Strategic Relations and Communications, where she helped implement more robust, state-of-the-art marketing communication platforms for the campus.

In retirement, Draper plans to spend more time with her family and tend to her own health and well-being. Her family is her greatest personal legacy, but her greatest CU legacy, perhaps, will be her work to support the future needs of the university that welcomed her into its fold and the community that embraced her and offered her many opportunities to succeed as one of its own.

“There is mutual benefit for both parties," Draper says of the CU Boulder South annexation process. "The city needs effective flood control while the university needs to use at least part of this asset for housing, academic space and recreation. It’s taken years, but we’ve made a lot of progress on working toward a solution that I hope will ultimately be good for the city and the university.”