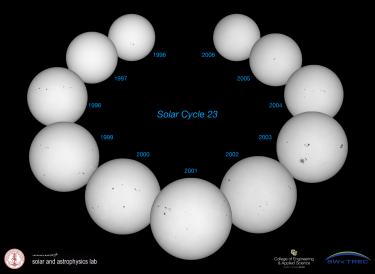 Images of the Sun taken in visible light by the ESA/NASA Solar and Heliospheric Observatory (SOHO) Michelson Doppler Imager (MDI) instrument. The MDI instrument was produced by NASA, Stanford University, and the Lockheed Martin Solar and Astrophysics Laboratory in Palo Alto, California. It operated on SOHO from 1995 to 2011. Created using JHelioviewer(jhelioviewer.org) and Apple Keynote software.