Gravity waves (GWs) are atmospheric waves that commonly arise from irregularities in the fluid motion, such as wind flow over topography (e.g. mountain or lee waves) or from deep atmospheric convection. GWs are of particular geospace interest because they provide a means to transport energy and momentum from the lower to the upper atmosphere, potentially dissipating energy in the thermosphere and impacting the atmosphere at altitudes where satellites orbit. However, precisely how GWs affect the thermosphere is unknown to the extent that there is debate as to whether GWs result in a net heating or cooling of the thermosphere.

This gap in understanding motivates the development of a space-borne instrument suite called the Occultation Wave Limb Sounder (OWLS), specifically designed to characterize the effects of GWs on the thermosphere. OWLS will fly on the  INPIRESat3 MicroSatellite developed by Nanyang Technological University in Singapore, with a launch tentatively scheduled for November 2021 by the Indian Space Research Organization.

As GWs propagate and eventually dissipate in the thermosphere, they influence its state and dynamics. Observations of GWs in the middle thermosphere are sparse to non-existent, leading to a poor understanding of GW influence. Most of our current understanding comes from modeling investigations. However, controversy has developed between major modeling groups about the impact GWs have on the temperature of the thermosphere. Here we seek to end this controversy with a specifically designed mission to address the following questions:

Science Question 1: Are regions of high GW potential energy in the high latitude thermosphere positively correlated with regions of temperature increase or decrease?

Science Question 2: Is there a transition in dominant vertical wavelengths of GWs in the middle thermosphere from those reported in the MLT region, and does this vary with season and local time? 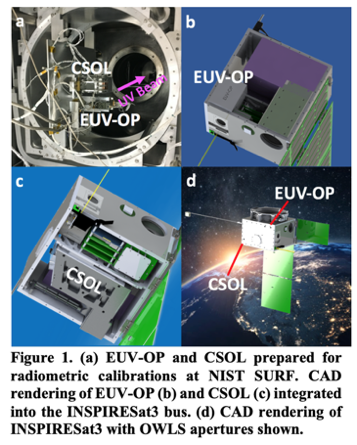