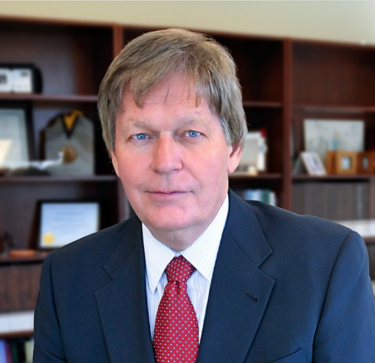 Daniel N. Baker is the director of the Laboratory for Atmospheric and Space Physics. He is a Distinguished Professor of Planetary and Space Physics at CU and a professor of physics in the department of Astrophysical and Planetary Sciences. Baker studied under James A. Van Allen and subsequently worked with Edward C. Stone at the California Institute of Technology. He was the group leader for space plasma physics at Los Alamos National Laboratory (1980–1987) and was the division chief at NASA’s Goddard Space Flight Center (1987–1994). Baker is the lead investigator on NASA missions including the Magnetospheric Multiscale (MMS) mission, the Radiation Belt Storm Probes (Van Allen Probes) mission, and the Interstellar Mapping and Acceleration Probe (IMAP). He chaired the National Academy’s 2013–2022 Decadal Survey in Solar and Space Physics. Baker has edited nine books and published more than 800 refereed papers. He was the 2010 winner of the AIAA James Van Allen Space Environments Medal. In 2015, Baker was chosen as the Vikram A. Sarabhai Professor of the Indian Physical Research Laboratory. He also received the Colorado Governor’s Award for High-Impact Research related to his space weather research in 2016. In 2018, Baker was awarded the American Geophysical Union’s highest honor, the William Bowie Medal. And in 2019, he won the Hannes Alfven Medal of the European Geosciences Union.