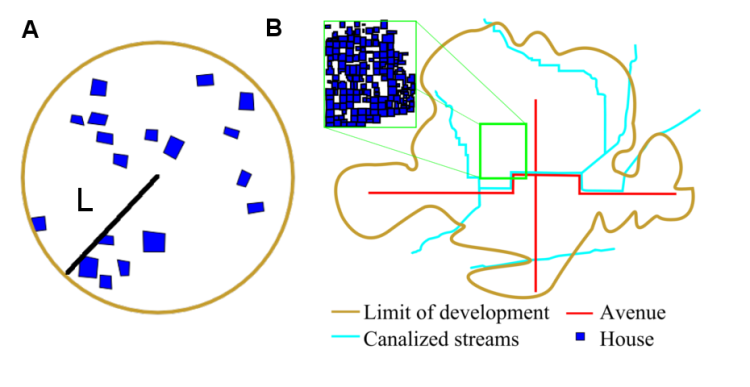 Our approach builds from simple models of social networks embedded in space. Here we show a representation of an amorphous (A) and a 'networked' (B) settlement.

We are a transdisciplinary collaboration of researchers and institutions seeking to establish a theoretical and empirical basis for the study of human settlements through history. Although we acknowledge the tremendous variety in human societies and histories, our goal is to identify common properties of all human settlements, and general processes of growth and decline, in a framework that accommodates both regularity and contingency. We refer to human settlements as social reactors due to their role in concentrating and accelerating social interactions and their outcomes in space and time. This view derives from urban scaling research and the discovery that some emergent properties of modern cities are also apparent in pre-modern and even non-urban settlements.

Based on these findings, we are developing a framework that:

Our work is driven by an interplay among theorizing, model building, data assembly and empirical validation. It illustrates the applicability of archaeological and historical data to contemporary issues, including the effects of agglomeration, the sources of economic growth, and the design and sustainability of cities. It is also informed by, and contributes to, the ongoing efforts of economists, geographers and urbanists to build a rich synthetic understanding of urban life.