University of Colorado Boulder (CU Boulder) is a school that cultivates diversity and acceptance. Many students, however, say otherwise. Among students of color, the overwhelming whiteness of the campus can be intimidating especially when 75% of their peers don’t understand the weight of being a student of color. Many white students on campus exercise their confusion through microaggressions, and although they don’t mean it, their interactions with students of color are sometimes punctuated with implicit bias. 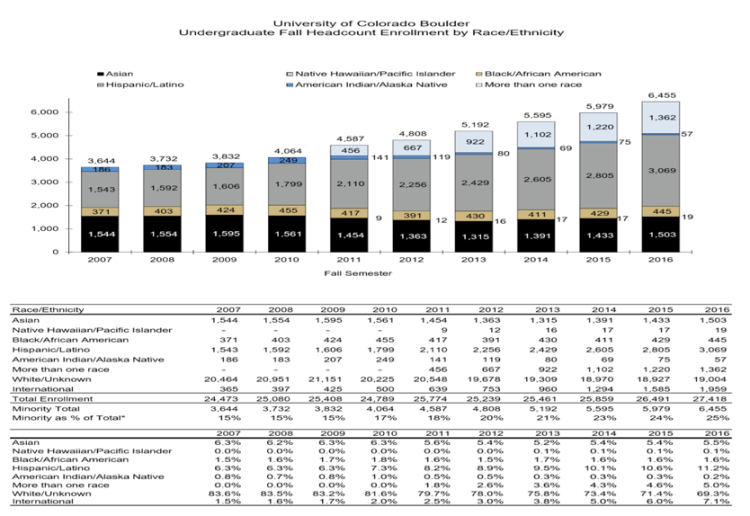 “I think that I have a lot of privilege when it comes to implicit bias because I am lighter skinned than other women of color” said Logan Gomez, a graduate student and teaching assistant at CU Boulder who identifies herself as biracial -- half white and half black.

When confronted with questions like, “what are you?” and “where are you from?”, Gomez explains that while she is able to look past it, these questions are microaggressions that come from “an implicit bias understanding of different racial categories”. Despite these microaggressions, CU Boulder has seen increasing enrollment rates for students of color.

The 2016-2017 Diversity Report for University of Colorado in Boulder shows an increasing enrollment of minority students from different ethnic backgrounds between 2007 and 2016. What this graph doesn’t show, is that the 6,455 total minority undergraduates in Fall 2016 only make up less than 25% of the total enrollment of 27,418 students. The other 75% of which are white.

According to the 2017 Princeton Review, University of Colorado in Boulder ranked number 15 in Least Race/Class Interactions, which undoubtedly raises questions as to whether or not students of color feel that they are welcomed on campus.

On social media, the CU-Boulder Reddit page gave students the opportunity to anonymously ask questions, discuss campus, and receive answers from peers and upperclassmen. Conversations such as these help to shed light on the diversity problem that is perceived on campus, one that students on social media said is overlooked by any official tour or information session.

For example, when students asked about the experiences that racial minorities experience in the predominantly white school, the replies were loaded with none too subtle observations: “the lack of diversity is apparent”, “whitest place ever”, and “whiter than wonderbread”. Incoming students, especially students of color, might see little comfort in these responses, and more concern instead.

On Twitter, one particular response gives insight to the reality of the situation: “people are open and accepting but stereotypes are often applied just because it isn't very diverse here”. Other responses also largely criticized the liberal status of both the college and the city of Boulder suggested that both lack meaningful experience with ethnic minorities.

As on every campus, there are situations where an African-American student will see the n-word or a Latinx will be thrown a racial slur. When asked about the effects of explicit racism like this, Director of Diversity Recruitment and Retention, Dr. Krishna Pattisapu answered, “when those big things happen, I think it’s more instantaneous, like I see students saying, ‘I don’t know if I belong here at CU Boulder’”.

Pattisapu added that the most common and overall most destructive form of implicit bias is shown through microaggressions, which is a subtle or unintentional (subconscious) form of discrimination and stereotyping. Students who are frequently exposed to the effects of implicit bias often say that they feel disconnected from the rest of the student body, and this impact could be connected to low retention and graduation rates within that community.

In an interview with Angie Chuang, an Associate Professor in Journalism with expertise on minority identity, she indicated that continuous microaggressions from teachers and peers were most harmful to the confidence of underrepresented groups. When giving required employee training on implicit bias, Chuang said that “eye contact can be the most dangerous or impactful form of bias that you give when you’re in charge of the classroom”. 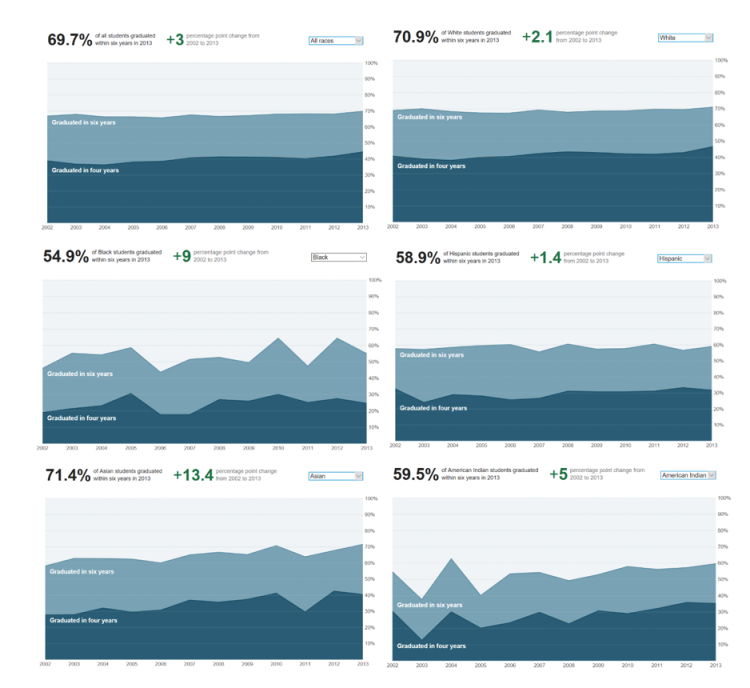 “Sometimes if I’m in a history class, or just a class where we’re talking about the 1960’s and like slavery,” said CU junior Irmina Clark, an African-American student, “people will automatically turn to me and want to see what I think”.

According to Chuang, the interactions between teacher and student are very complex.

“The teacher thinks that they’re giving the person an opportunity to speak from their experience,” Chuang said, “but the student may or may not want to volunteer to be the spokesperson of their race at that particular moment.”.

Singling out students of color in class can also impose a fear of failure, which can lead to academic underperformance.

According to Dr. Kevin Kumashiro, students of color who feel that less is expected from them may underperform academically, which is reflected in test scores and graduation rates. The overall rates of graduation for all races from University of Colorado in Boulder between 2002 and 2013 has remained primarily consistent with white students having the highest percentages.

The only exception to this trend of low graduation rates and underperformance is seen within the Asian-American student population, but these rates produces problems of its own. Namely, the Model Minority Myth. In 2013, as shown by the graphs above, 71.4% of Asian-American students graduated from college within 6 years and white students at 70.9%. The school average of all races is 69.7%.

The article, “Behind the ‘Model Minority’ Myth: Why the ‘Studious Asian’ Stereotype Hurts” by NBC-News Reporter Chris Fuchs,emphasizes the negative results of implicit bias that is placed upon Asian-Americans. Fuchs writes that “for many young AAPI’s (Asian-American and Pacific Islanders), it means always rising to meet an academic bar that seems to perpetually move upward – or being afraid to ask for help in school because the model minority label suggests you don’t need it”.

The CU Boulder campus provides services to students of color to counteract the emotional labor of microaggressions and confide their experiences in a safe and understanding community. Programs such as LEAD (Leadership, Excellence, Academics, Diversity) Alliance include 16 programs like Education Diversity Scholars (EDS) for students studying education and Multicultural Leadership Scholars (MLS) for students wanting to understand barriers for minority backgrounds.

“Our governing center of the center that coordinates all of these diversity and inclusion efforts through the LEAD Alliance is called the Office of Diversity, Equity, and Community Engagement. That’s a really long name so most people just call it ODECE”, said Dr. Pattisapu.

Pattisapu suggests that students of color who feel powerless against implicit bias might feel that they don’t have much influence on overcoming it. But as history on college campuses show, students can have immensely powerful voices.

“I don’t go to speak on their behalf,” said Pattisapu, “I bring the students with me because it’s really students on this campus that get things changed.” 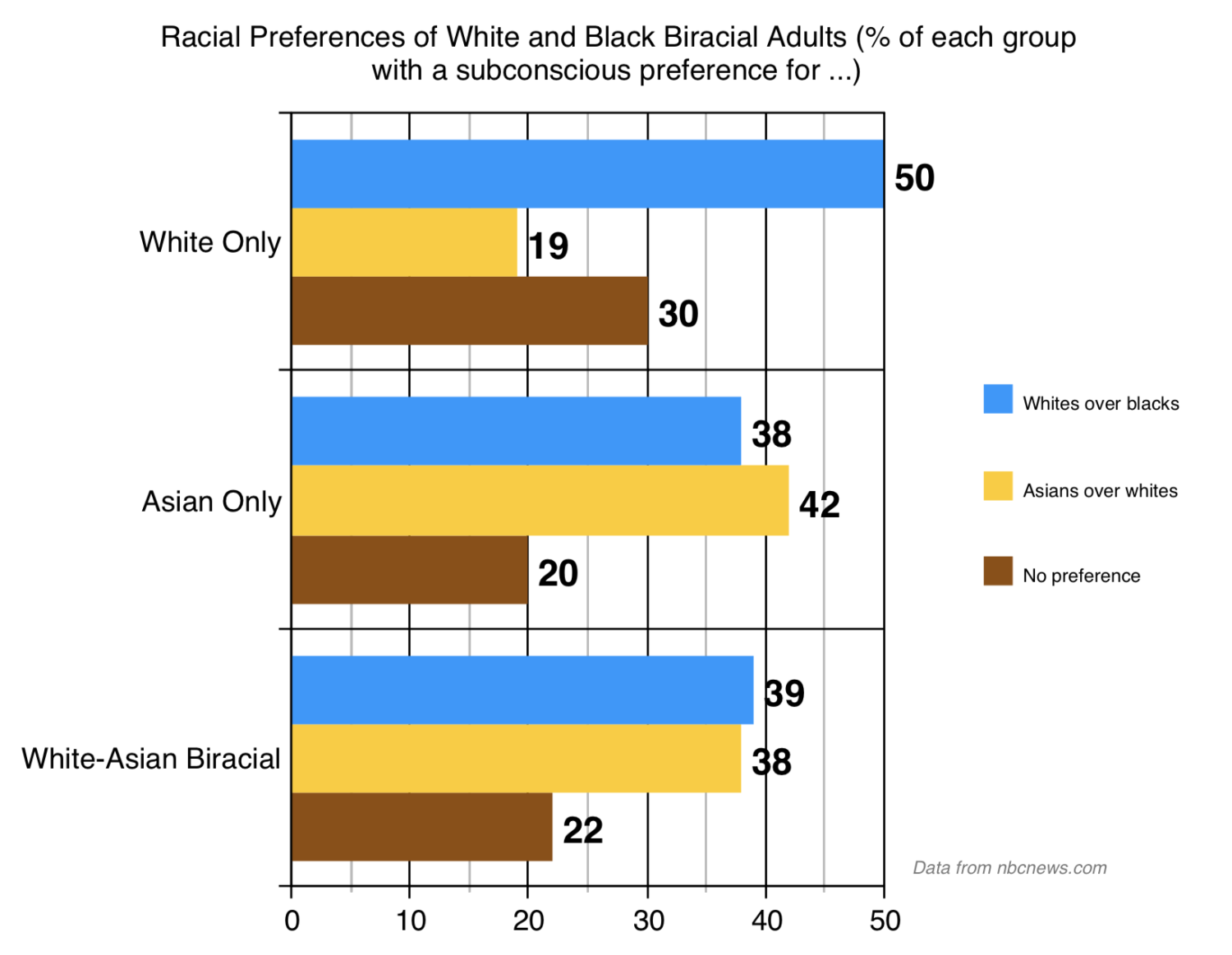 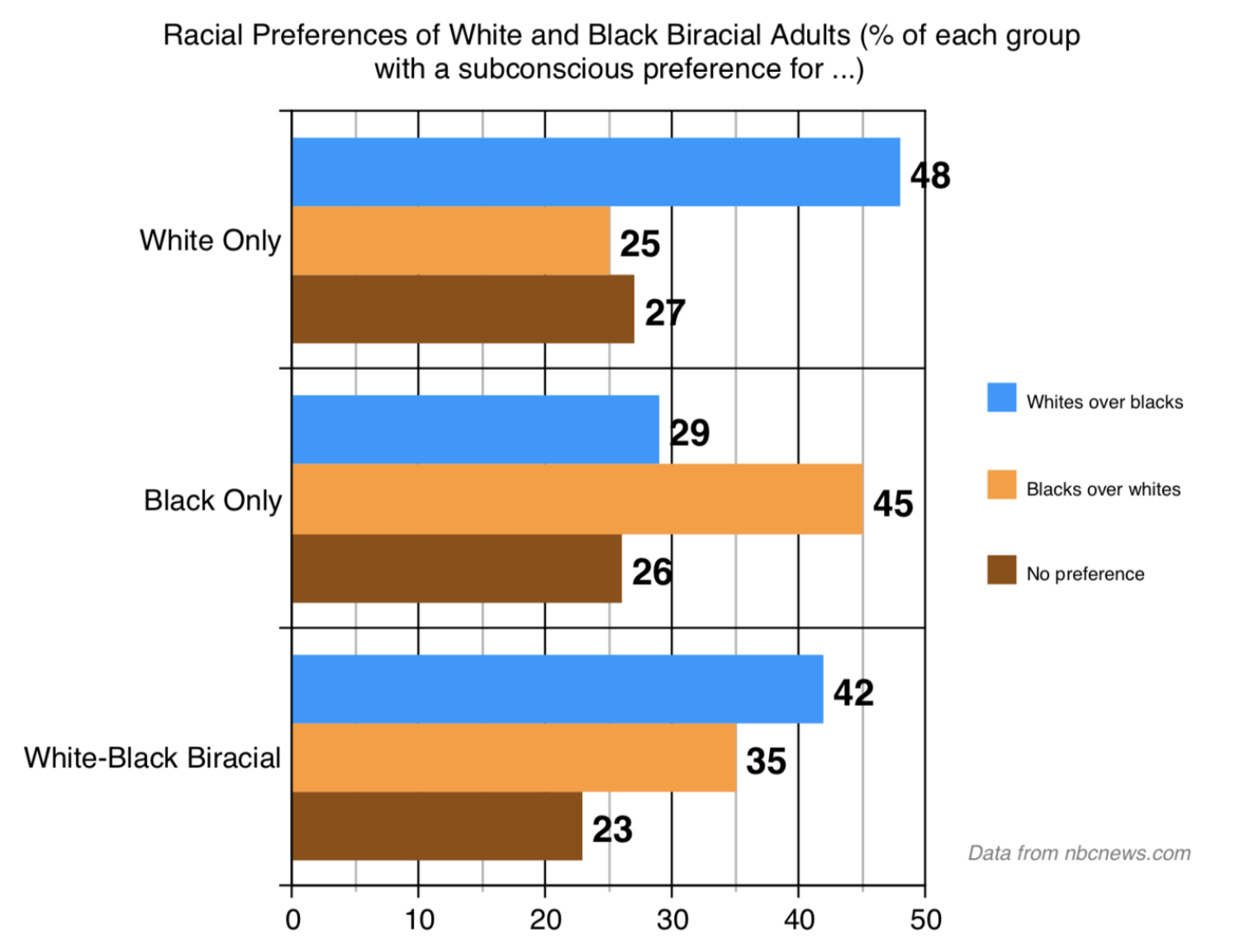 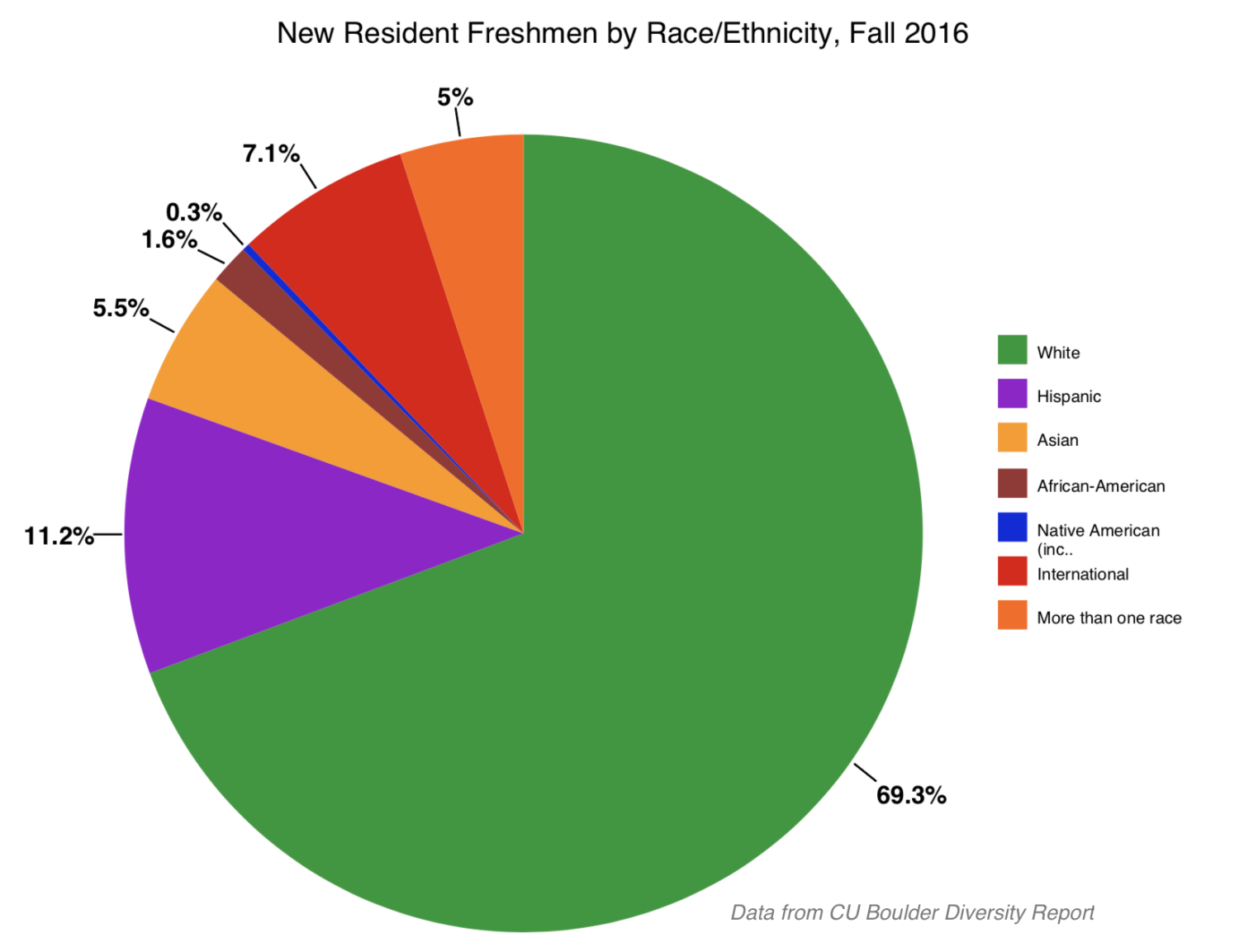 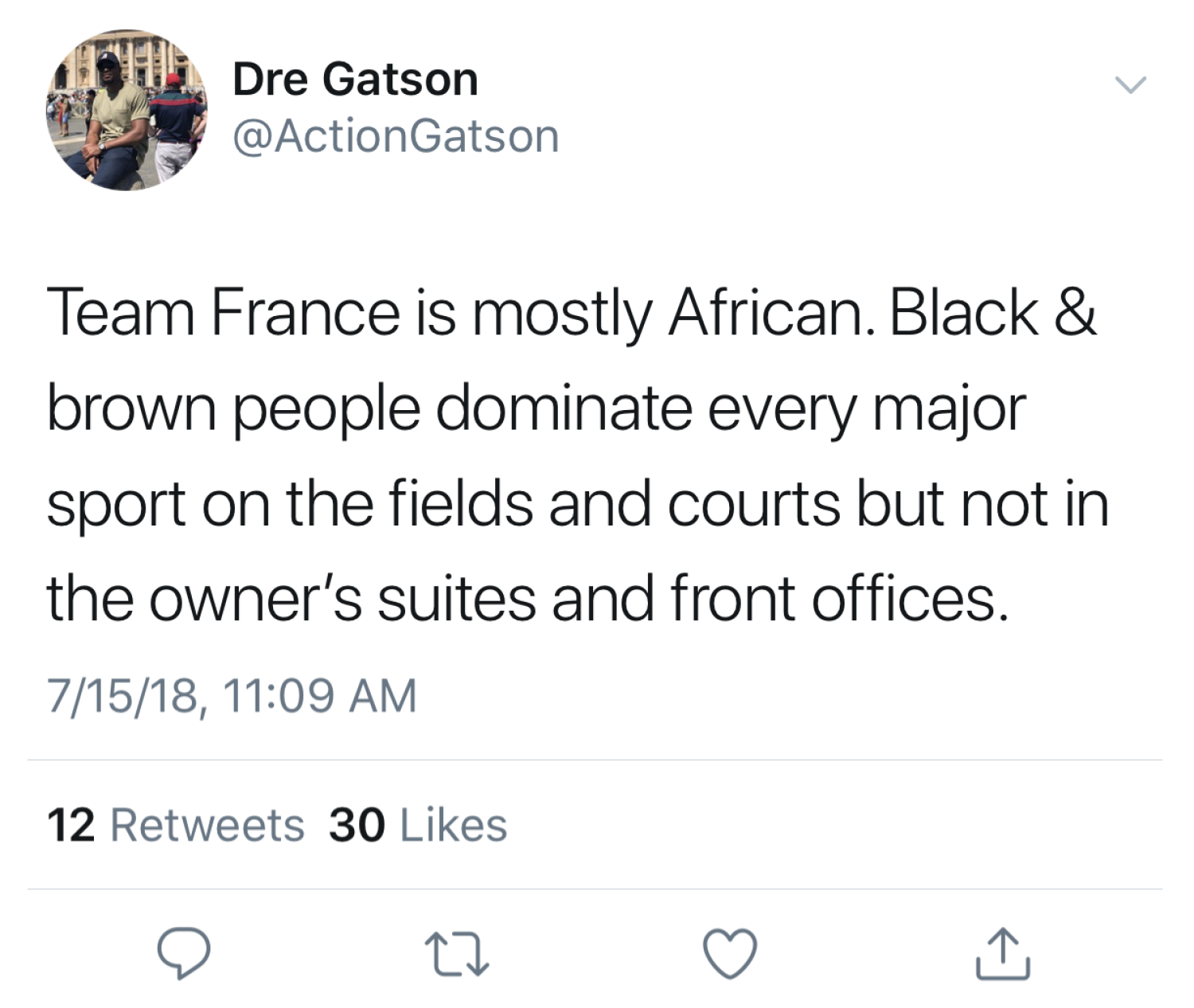 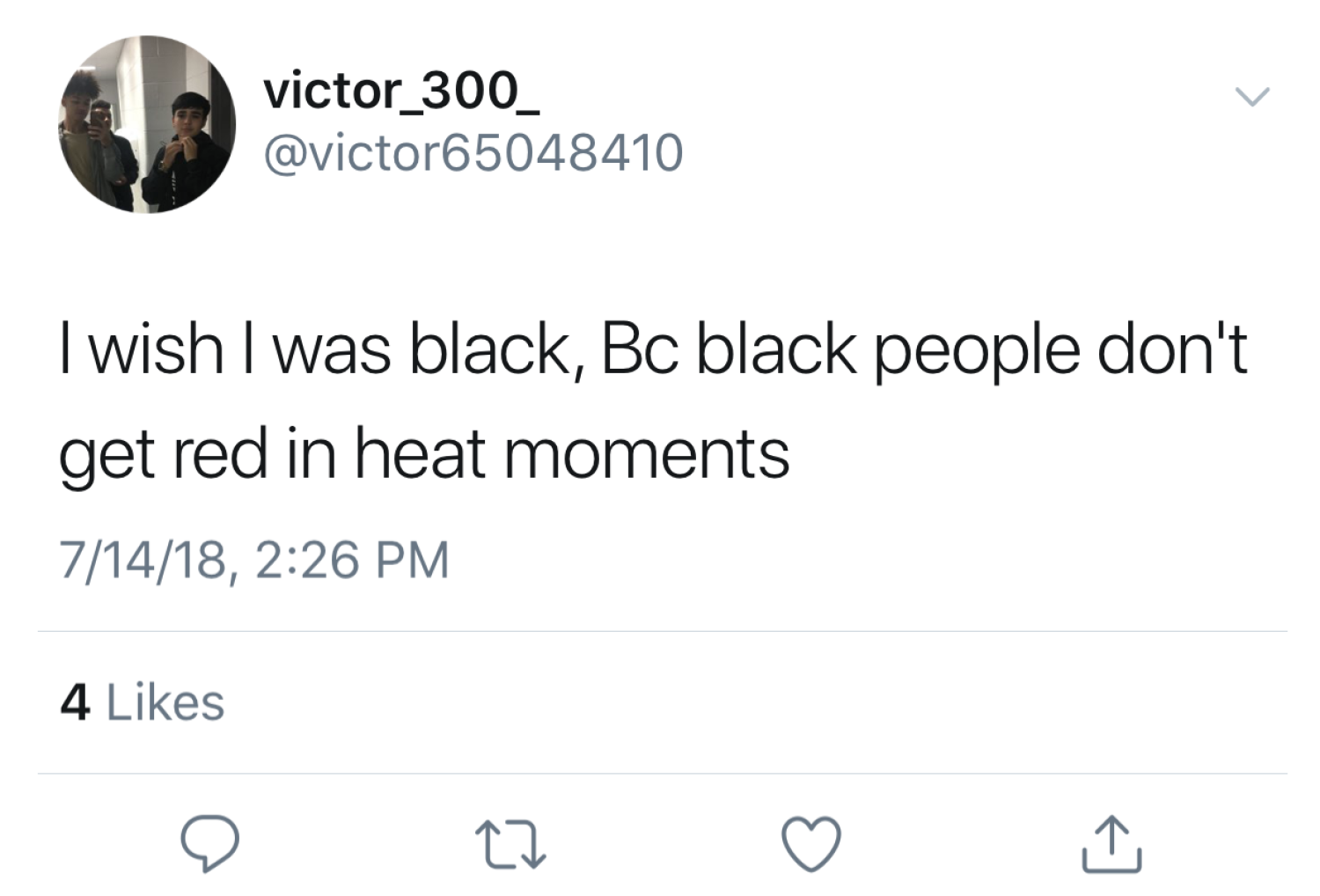 Tweet from Victor
Return to the top of the page