One common saying in economics is “a rising tide lifts all boats,” meaning improvements in the general economy will benefit all members participating in that economy. This is the lens through which this policy brief is written: in order to help strengthen its overall economy, Russia must dedicate time and resources into the those most in need, because people struggling for their survival are unable to focus on anything else, much less contribute to the economic prosperity of their country. This paper aims to answer the questions of why economic inequality is so extreme throughout Russia, what are its effects, and what can the Russian government do it mitigate and close the wealth gap?

Political scientist Thomas F. Remington conducted an empirical analysis in which he tested how different factors, such as urbanization or mineral resource extraction share in output, affected the average real wages in different Russian regions (Table 1.1 below). His findings coincide with the theory that regions with higher mineral resource extraction shares of output have substantially higher regional wages. This empirical analysis is intersectional, which means when that variable is observed, all other variables are held constant. The mineral resource extraction variable also has a p-value<0.001, making its room for error very small and therefore these results can be trusted. Additionally, data collected by the International Policy Centre for Inclusive Growth concluded that regions in Russia that have oil, gas, and minerals industries as at least 50% of their economic output have, on average, 33% higher incomes than other areas of Russia . A graphic representation of this disparity can be seen in Graph 1.1 below.

According to studies of the world’s major economies analyzed by the World Inequality Database, Russia is the most divided in terms of socioeconomic classes . In the 1990s, amidst all the chaos of the Yeltsin presidency, a new, entrepreneurial class emerged. These entrepreneurs were called the oligarchs, and they took advantage of the chaos and corruption of the 90s for their own personal gain. Many of these oligarchs hold monopolies in the oil and gas industry—another reason that this industry is so lucrative, but few Russians benefit from that wealth. A report published by NPR found that as of 2013, 110 individuals harbor 35% of household wealth in Russia. One reason for this is that after 2001, Russia replaced its individual income tax rate system with one, flat, income tax rate of 13%. Although this tax is technically “equal” because it is 13% for everybody, those in poverty are carrying a much heavier burden because they are starting with so much less. Graph 2.1 shows the disparity in income and wealth of the top 1% and the bottom 50% of Russians.

If the Russian government wants to minimize economic inequality, resulting in a stronger overall economy, it must do it in multiple parts. First, Russia must implement a progressive income tax. This tax would help to even out the playing field, and poorer families would be able to use more of their money for personal necessities. The Russian government must also try to enforce tax payments. The oligarchs are notorious for tax avoidance , so much so that the actual wealth of these people is often unknown. The government must more strictly enforce tax collection from these titans of industry.

Second, while some of the taxes collected from the rich should still go toward what they were initially paying for (i.e. social welfare programs), the Russian government should use these new tax surpluses to invest in industries other that oil, gas, and minerals, and therefore help to diversify its industry. This diversification would both strengthen Russia’s overall economy and help boost the poorer regions void of oil and gas. Russian economist Viktor Ishaev even believed that this investment would not be as daunting as one might think. Existing capital is being underutilized, and a burst of investment could put these resources back to productive use; “a practically free source of economic growth.” Even less money would be needed to boost struggling regions by, for example, recycling under-utilized capital.

Some might argue that the key to aiding the Russian Federation’s economic inequality and the subsequent economic benefits would be focusing on foreign investment rather than restructuring the tax system. Although, economically speaking, foreign investment can often boost domestic economies, this route is unfeasible. The current investment climate in Russia is weak right now; some of the most concerning aspects for investors are Russia’s unstable regulations, unfavorable economic developments, and its complicated business environment. Russia’s ongoing conflicts in places like Ukraine and Crimea are also reasons for investors to hold back; wars like these increase costs and restrictions on investments. Foreign investment is usually a good way for countries to boost their economies, but in the case of the Russian Federation, the problem goes deeper.

The Russian Federation is facing a huge problem with its economy. Income and wealth inequality are higher in Russia than any of the other major world economies. Because of this, Russia is not working at its full economic potential. The best way for Russia to work towards a more economically equal society is enacting a progressive tax rate, ensuring it is enforced, and using funds from those taxes to diversify their industries. Lifting the lowest members of society will lead to a more prosperous life for all. 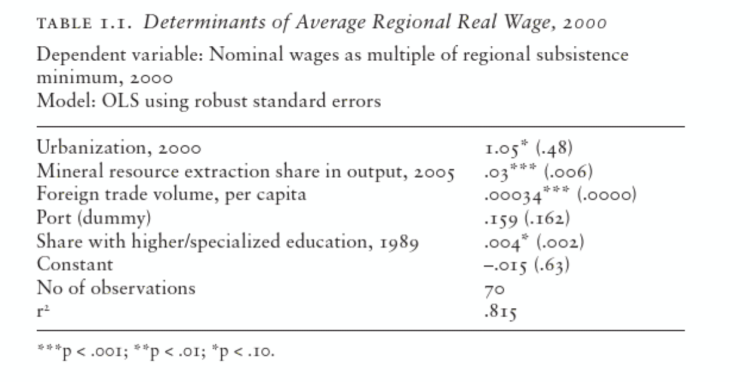 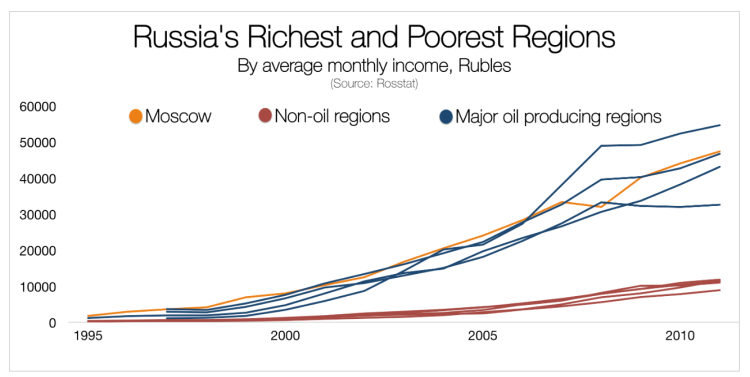 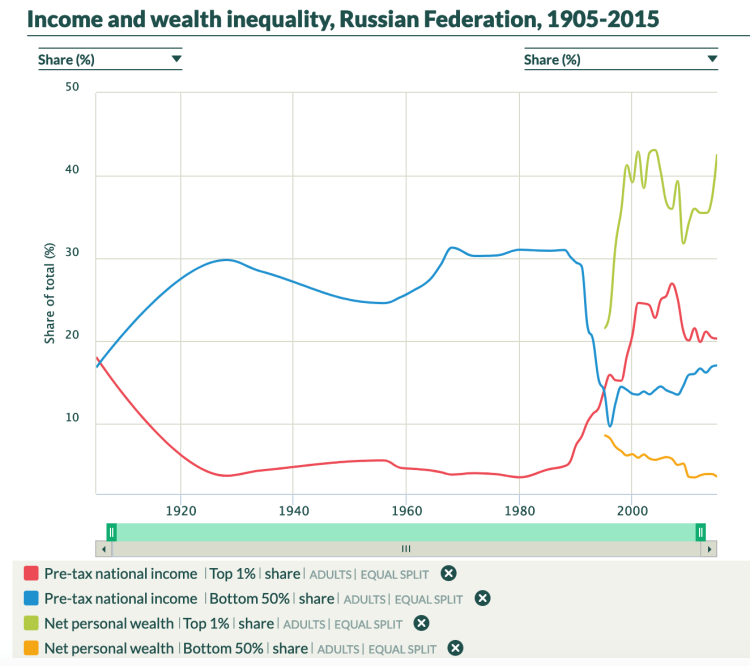