Professor Joe Jupille doesn’t have your normal commute to and from campus every day. “I ride my bike to and from work” and “it is about 10 miles each way or about 45 minutes away.”

“It started as a personal thing to improve my own fitness, but it has all these other benefits I didn’t realize” he said listing off the many perks of riding a bike as opposed to driving.

One such benefit is the ability to destress after a long day of work on campus, which is a constant for Jupille because of his many roles at the university.

Jupille has been a professor at CU since 2005, when he “jumped at the opportunity” to join the faculty because “the combination of the location and the quality of the department really appealed to me,” he said.

Acknowledging the cliché, Jupille believes that “our students are our future. I feel we have a moral obligation but also a practical requirement to give the best that we have to the young people as they carry our society forward.” 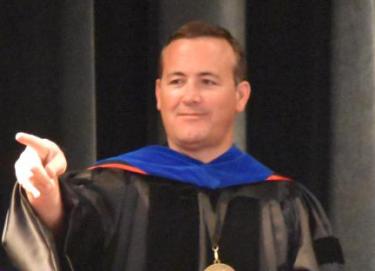 As a result of his dedication to teaching, he received the 2017 Teacher of the Year Award from the Political Science Department. “I am very proud to be recognized by the department, which puts a lot of emphasis on good teaching and is full of amazing teachers whom I respect a great deal.”

Alongside teaching at the university, Jupille also conducts research which focuses on the European Union and the push-pull between rules and politics.

He cites his grandfather and great-aunt, who lived through the two world wars as children and young adults in France, as the inspiration for his research.

“The contrast of the Europe they had lived through, characterized by poverty and war, and the Europe I knew, which seemed prosperous and peaceful, raised a lot of questions.”

Jupille is currently working on a book project titled Theories of Institutions, which is centered around the question of “the conditions under which we see rules constraining politics, versus when politics push the rules around."

Jupille also took on a new role as the Faculty Athletics Representative (FAR) this year. According to Jupille, the role of the FAR is to “bring a perspective of the faculty to all things athletic” and “keeping the mission of the university at the center of everything we do.”

“I encountered a student who was so organized, disciplined, and hardworking it really inspired me to work with this remarkable group of students”, he said. “They deserve the very best that we can bring them.”

“I feel right at home” he quipped while holding up the rule book of the NCAA and the various treaties that outline the European Union, both of which are thick and impenetrable to the ordinary reader.

When Jupille isn’t working to improve the campus, he likes to read, fish, and spend “as much time as I can get with my family”, he said. “I have four kids and the greatest privilege of my life is being their dad.”

“I make a difference in the world at the dinner table with my four kids and in the classroom”, he said “and that should be enough for anybody.”