“I came to CU in 1984. It’s been a long time,” Professor Chan begins. He is one of the longest serving professors in the Political Science department and has been teaching at CU for over thirty years.

Born in China, Dr. Chan grew up in both Hong Kong and Shanghai until going to a boarding school in Geneva, Switzerland. He later immigrated to the United States to study at Tulane University in New Orleans. “It was very conservative. Many of the legacies of discrimination and racial prejudice were still very visible during that time there [the South].” He finished college in three years with distinction and triple majors in Political Sci 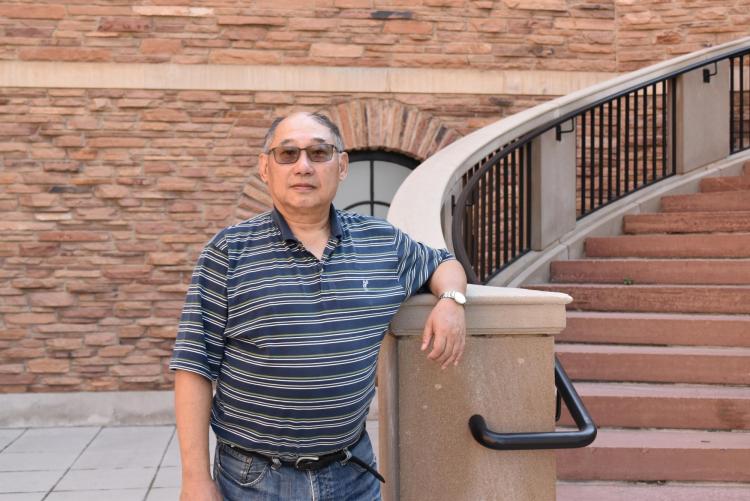 In 1970 he went to graduate school at the University of Minnesota. “At that time [his college and graduate school days], it seemed many college students were very engaged in politics.”

The Vietnam War and the Civil Rights Movement were both occurring, and Dr. Chan was heavily involved in protesting against the war and in favor of civil rights. “I was quite active on campus,” he admits. “The Vietnam War was raging and I became very skeptical about the reasons behind fighting the war. That got me motivated to study politics.”

Graduating with a degree in Political Science with an emphasis in East Asia and National Security, Mr. Chan originally wanted to work for the United Nations. When he couldn’t make the quota, he decided to go back to earn his Ph.D--and write his dissertation on the Vietnam War. “Somehow, one way or the other, I ended up being a teacher.”

“Being a professor is one of the best jobs you can have. I’m fortunate to have my vocation and avocation to be the same,” he says. “I love research and I like to teach. I interact with students quite often. After so many years, looking back, I think I made the right choice to join this profession.”

Dr. Chan has received teaching and research awards from CU alumni, the Boulder Faculty Assembly, and the College of Arts and Sciences, including the title of College Professor of Distinction. He is currently the director of Farrand Residential Academic Program, and continues to engage in research and teaching. He is working on his nineteenth book.

In his many years at the university, he has witnessed major changes in the last decades. “I think one very visible and important trend that I’ve seen in CU, like all the other universities, is that it has become less insular and more cosmopolitan. It has become far more diverse as an institution and more inclusive,” he says. “That’s a really good thing I think that we’ve seen changed over the years.”

Universities are becoming much more competitive, the professor notes. A challenge in this is that CU is not receiving funding to the extent of other universities. “I would like to see CU become more diverse, more globalized, and for the state as a whole to be more supportive of higher education,” Professor Chan says. “Human resources are most important in shaping the future of a country, people.”

As for students, he emphasizes the importance of staying engaged. “[Students] have to be engaged, be more attentive to political events, investigate on their own, and go beyond the sound bites and short clips that one sees on CNN or Fox news. Unfortunately, I don’t think there’s enough of that going on. It matters.”

With better education and more political participation, Professor Chan sees a lot of potential for positive change in our country. “It really comes back to the people. People have to want it, they have to be mobilized, motivated. They are the ones who should be in the driver's seat and determining the direction of the country.”