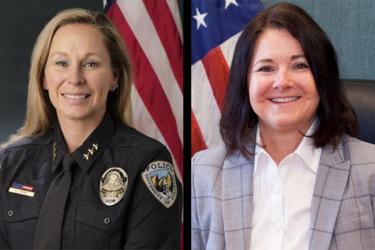 Hey, Buffs! On behalf of all of the members of the University of Colorado Boulder and the City of Boulder police departments, we want to welcome everyone to Boulder and to the CU Boulder campus.

We acknowledge that the past several months have been a troubling and uncertain time for everyone. From COVID-19 to the killing of George Floyd and the solidarity marches, we want you to know that we hear you and we are with you. Several changes have occurred with both of our departments since last spring and we wanted to share some of those with you.

In early June, we were both honored, along with Boulder District Attorney Michael Dougherty, to join in a Black Lives Matter march down the Pearl Street Mall. Since then, we have been meeting with a group of CU Boulder students of color and having open and frank conversations through a series of meetings.

In August, CUPD announced that we have outfitted all of our patrol vehicles with cameras that will allow us to capture video and sound of actions that occur in front of the vehicles as well as in the back seat. This is in addition to the body-worn cameras that CUPD and BPD officers wear.

Finally, Chancellor DiStefano announced the formation of the first CU Boulder Community Safety Task Force. This group has been directed to strengthen accountability, build trust, and foster greater transparency and engagement between campus police and the university community. We are excited for this opportunity.

Both of our departments believe in collaborative and accountable policing. We are available to talk with you about any concerns or suggestions you have to help us keep our campus and city a safe place to live, work, and learn. Please feel free to reach out to us directly. We are excited for a great year!