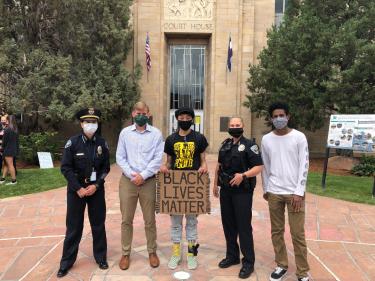 CU Boulder Police Chief Doreen Jokerst and other area law enforcement officials will continue meeting with a group of students to build on discussions started during a peaceful march through downtown Boulder in early June. The students invited Chief Jokerst, Boulder Police Chief Maris Herold and Boulder District Attorney Michael Dougherty to participate in the June 6 march on the Pearl Street Mall.

Other members of the CU and Boulder police departments also participated in the march, which organizers estimate drew 200 to 300 people of all ages, including downtown visitors who joined in spontaneously.

CU Boulder student Kennedy Blackwell organized the march and extended the invitation to the law enforcement officials. Blackwell, a junior who has a double major in Ecology and Evolutionary Biology and Environmental Studies and a double minor in Political Science and Space said she wanted to organize a march in Boulder, “because it is my second home.”

“As an African American woman –– at a university where there are very few of us attending –– it is important to speak out against injustice whether it is on a national or local level,” she said. “My goal was to unify the community, educate, and bring forth injustices that occur frequently in black and brown communities.”

Chief Jokerst said she and other members of the CUPD “were honored to participate in an event that was so important to students.”

“Building stronger relationships with students and other members of the CU Boulder community is a priority for us and even more so now as we work to build and reinforce mutual trust and understanding,” the chief said.

Blackwell said her next steps include to continue to protest against injustice, to communicate with local legislators and law enforcement and “most importantly, to vote in local elections.” 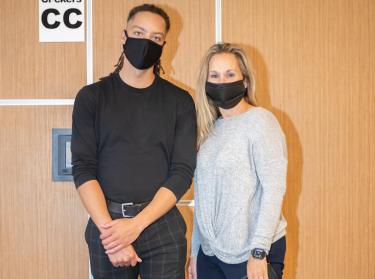 Discussions during the march led to additional conversations, the first of which was held on Friday, June 26, 2020, and included Chiefs Jokerst and Herold, DA Dougherty, and several student leaders.

“The open forum between CU Boulder students, CU Police, Boulder Police, and the Boulder District Attorney was the start of a conversation. While conversation is necessary, the next steps will need to be rooted in tangible action,” said External Student Body President Isaiah Chavous. “I am confident that, based on the progress so far, data transparency, student safety, and police accountability are on the horizon.”

Another meeting between the student representatives and law enforcement leaders will be scheduled in the very near future to continue the conversation.