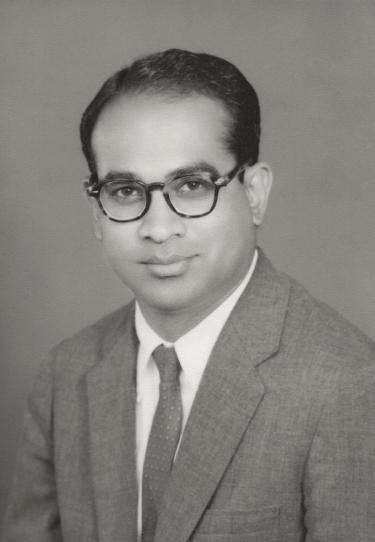 Kalyana T. Mahanthappa, age 88, of Lincoln, MA, formerly of Boulder, CO, died peacefully on November 2, 2022. “K.T.”, as he was known to friends and colleagues, was a theoretical physicist and educator who loved travel, art, and classical music, and was a devoted husband and father.

Born in Tumkur, Karnataka (then the state of Mysore), India on May 1, 1934, K.T. grew up in several towns as his family moved in the state to follow his father, a high-ranking civil servant. Showing an early aptitude for math and science, he completed a B.Sc. with honors in Physics from Mysore Univ. (Bangalore) in 1954, followed by graduate studies at Delhi Univ. While working towards his M.Sc., somewhat on a whim, he thought to apply to graduate schools in the U.S. He completed one application, took it to the post office, and stunned by the cost to mail it, decided to apply to only that one U.S. university. A few months later, he told his father he had been accepted to Harvard and insisted on going. With M.Sc. in hand, he boarded a Norwegian freighter in Kozhikode (known then as Calicut) destined for New York with only a few passengers. He survived the voyage subsisting as a Hindu vegetarian on “stinky cheese” eaten at the captain’s table, squeaked through the Suez Canal just weeks before it closed due to the Second Arab-Israeli War, and finally arrived in Cambridge in 1956. K.T. was fortunate to have as his mentor and thesis advisor, the future Nobel laureate Julian Schwinger, and he was awarded a Ph.D. in Theoretical Physics by Harvard University in 1961.

His professional career thereafter focused on “grand unification theories, fermion mixings, and masses including charge fermions and neutrinos”, and his appointments spanned fellowships and faculty positions at UCLA, UPenn, the Inst. for Advanced Study (Princeton), and from 1966 onward, the Univ. of Colorado at Boulder, where he became full Professor in 1970 until retirement in 2014. In addition, were sabbatical fellowships at the Abdus Salam International Centre for Theoretical Physics (Trieste), Cambridge Univ., and Imperial College London. Among recognitions received, he was elected a Fellow of the American Physical Society in 1969. Beyond his own research and teaching, for 25 years, K.T. took great pride in organizing, securing funding for, and leading the annual Theoretical Advanced Study Institute (“TASI”) in Boulder - an international gathering of scholars for lectures and workshops, a “rite of passage for most theoretical physicists in the US” as described by one of his former graduate students. Further to his academic legacy over 50 years, K.T. taught hundreds of undergraduates, trained and mentored more than 20 graduate students and postdoctoral fellows, and published over 140 research papers in respected journals, conference proceedings, and book chapters.

Beyond a life in physics, K.T. loved travel. With his family, he enjoyed hiking in his beloved foothills of Boulder, exploring National Parks throughout the American West, and sought out art and culture during sabbatical years in Europe. His globetrotting via research conferences and workshops took him to over 30 countries over the years before finally moving to Lincoln, MA in 2015. Throughout, he remained close to his roots through philanthropic support of educational and community service institutions in Karnataka.

K.T. is survived by his wife of 61 years, Prameela, his three sons, Nagesh and his wife Valentine Talland of Cambridge MA, Rudresh and his wife Pooja Bakri of Montclair NJ, Mahesh and his wife Kara Burrow of Edina MN, and four grandchildren, Tara Talland, Talin, Freya, and Asha.

In K.T.’s memory, donations may be made to The Boulder County Parks & Open Space Foundation, or to The National Park Foundation. A Celebration of Life will be held at a later time; for additional information or to leave condolences, please visit Dee Funeral Home.