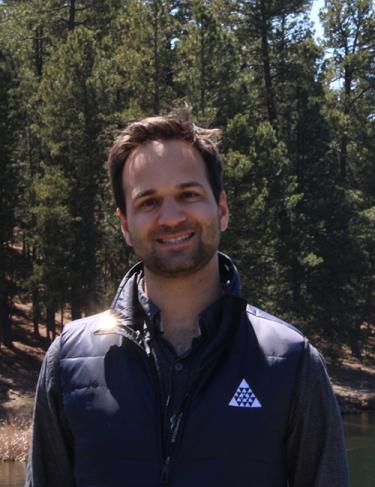 Assistant Professor Dennis Perepelitsa of the University of Colorado Boulder Physics Department will receive a five-year, $750,000 grant as part of the U.S. Department of Energy’s Early Career Award program, for his proposal entitled “Searching for Parton Energy Loss in Quark-Gluon Plasma Droplets.”

Data for Perepelitsa’s research is collected at the Large Hadron Collider (LHC) at CERN, in Geneva, Switzerland. At this international facility, heavy nuclei are accelerated to near the speed of light and brought into collision, creating a “quark-gluon plasma” — a miniature version of the primordial matter that comprised the Universe shortly after the Big Bang. These collisions are analyzed with the ATLAS detector, a 7000 ton, 46 meter long experiment situated underground in the LHC tunnels, with an experimental collaboration consisting of thousands of scientists around the world. Professor Perepelitsa’s research seeks to determine how high-energy particles are affected by quark-gluon plasma regions they encounter. Perepelitsa is also involved in the development of the sPHENIX experiment, a new detector being designed and built at the Relativistic Heavy Ion Collider at Brookhaven National Laboratory in the U.S.

“I am grateful for this recognition and encouragement by the broader scientific community,” Perepelitsa said. “The financial award represents a crucial investment right as I am starting to develop my research program in experimental nuclear physics at CU Boulder.”

“We are excited to have Assistant Professor Perepelitsa honored with a DOE Early Career Award,” Physics Department Chair John Cumalat said. “These awards recognize the excellence of young faculty who quickly become international leaders in their research field.”

Dennis Perepelitsa earned his PhD in Physics from Columbia University in 2014 and performed postdoctoral work at Brookhaven National Laboratory as a Goldhaber Distinguished Fellow. He joined the Department of Physics at the University of Colorado in August 2016. He has won multiple awards including the Goldhaber Distinguished Fellowship in 2013, the Relativistic Heavy Ion Collider at Brookhaven Thesis Award in 2014, the ATLAS (CERN) Thesis Award 2014, and the MIT Laboratory for Nuclear Science Lee Grodzins Postdoctoral Prize in 2016.

The Early Career Research Program, now in its eighth year, is designed to bolster the nation’s scientific workforce by providing support to exceptional researchers during the crucial early career years, when many scientists do their most formative work. A full list of selectees can be found at: https://science.energy.gov/early-career/.