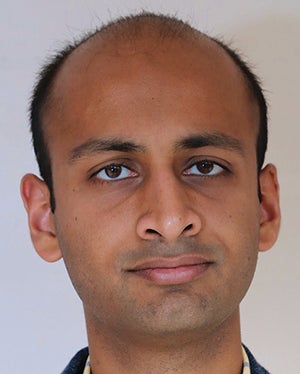 Congratulations to Assistant Professor Rahul Nandkishore for winning a 2017 Alfred P. Sloan Fellowship. The award was announced on Tuesday, February 21.

"I feel honored to receive this prestigious award for my research in theoretical condensed matter physics” Nandkishore said.

According to their web site, the Sloan Research Fellowships seek to stimulate fundamental research by early-career scientists and scholars of outstanding promise. This year, 126 researchers were recognized for their distinguished performance and a unique potential to make substantial contributions to their field.

"I intend to use the award to continue exploring the behavior of quantum many body systems, both in and out of equilibrium,” Nandkishore said. “New frontiers in equilibrium many body physics are constantly being opened up by advances in materials science. Meanwhile, the study of out of equilibrium many body quantum physics is one of the great open frontiers for theoretical physics research, progress on which has recently been revolutionizing our understanding of quantum statistical mechanics. I am extremely happy that I have the opportunity to do research on a topic that is relevant for so many different areas of physics, and which offers the opportunity to make foundational contributions to our understanding of quantum phenomena."

The award comes with a $60,000 prize that Professor Nandkishore will use to further research the behavior of quantum many body systems, both in and out of equilibrium.

Rahul Nandkishore earned a bachelor’s degree and Master of Science degree from University of Cambridge in 2008 and a doctorate degree from MIT in 2012. Prior to coming to University of Colorado in 2015, he was a post doctoral researcher at the Center for Theoretical Science at Princeton University.  Assistant Professor Nandkishore is a theoretical physicist working on some of the most important current topics in theoretical condensed matter physics with exciting implications for areas from quantum information to string theory. He has published thirty-five papers, including twenty since 2014, and he is first-author on nineteen published papers. He has two invited review papers.