The University of Colorado at Boulder Department of Physics is delighted to have been recognized with a high ranking in the 2010 National Research Council report on U.S. doctoral programs, which was released Tuesday, September 28th. According to the NRC's affiliate site—Phds.org—the department is ranked at about 14th among universities in the nation, and 6th in the public university category.

The NRC methodology involves a complicated statistical analysis based on numerical data through 2006, which include publications per faculty, citations, funding, awards, graduation rates and many other measures. The rating

system is designed to provide a broad range of dimensional rankings, in order to help prospective students and others effectively gauge each academic program.

and 6th among public universities reflects our many accomplishments since the 1996 NRC report in which we were ranked 38th out of 147 programs. Our dramatic rise in ranking is a testament to our outstanding

faculty, staff and students and their many research and educational accomplishments. Since 1996, research funding to our faculty has quadrupled and our graduate and undergraduate programs have grown dramatically. During that same period, fourteen different faculty members have been awarded one or more of the leading international 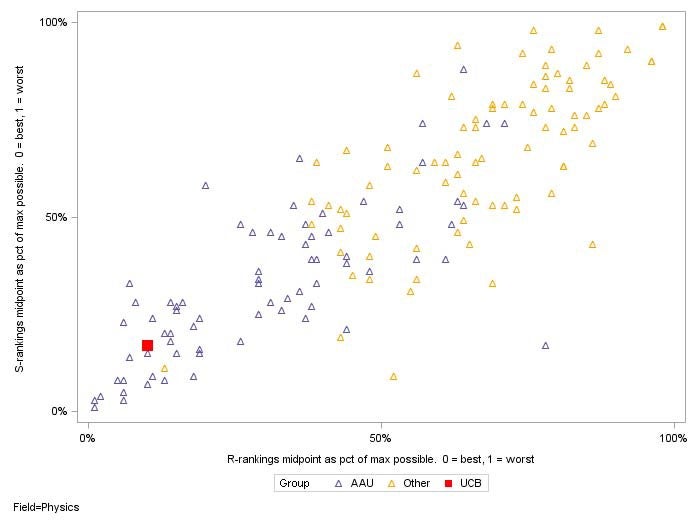 research awards in their fields, six have been recognized with national teaching awards, fifteen of our junior faculty members have won leading national awards for young researchers, six faculty members have been elected to the one or more of the national academies and three members of the physics faculty have been awarded the Nobel Prize. Many of these have occurred since 2006.

We are proud to be recognized along with the many other highly ranked programs at CU. Our high rankings across a wide range of academic disciplines demonstrates

Left: This graphic represents the CU Boulder Department of Physics
(in red) compared to other physics programs nation-wide based on two ranking scales defined by the NRC. (graphic provided courtesy of the University of Colorado Office of Planning Budget and Analysis)