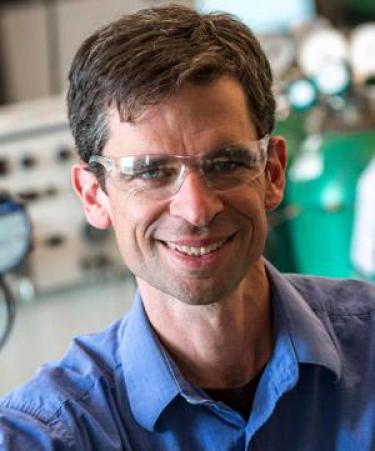 New research from Professor J. Will Medlin and collaborators at three other institutions points to a new, inexpensive and sustainable method of synthesizing hydrogen peroxide.

Hydrogen peroxide has many industrial uses, and is often used as a remediation agent when toxic chemicals contaminate a site, helping to neutralize harmful chemicals by breaking them down into harmless oxygen and water.

Unfortunately, the current commercial process used by chemical manufacturers to produce hydrogen peroxide creates environmentally harmful byproducts. Researchers have been searching for an efficient, direct and sustainable process to combine H2 with O2 to create H2O2, or hydrogen peroxide, at scale.

“We found that palladium catalysts modified with certain organic groups could be used to efficiently produce hydrogen peroxide directly from hydrogen and oxygen gases,” Medlin said.

Synthesizing hydrogen peroxide is a new application for the Medlin and Daniel Schwartz groups, which have been collaborating for almost 10 years on using organic ligands to modify catalysts. The group recently decided to focus on hydrogen peroxide and began to collaborate with Professor Javier Pérez-Ramírez at ETH-Zurich, who discovered that certain organic groups produced alongside the catalyst unexpectedly improved that catalyst’s performance.

“We asked the question of whether these organic groups could be intentionally designed to be effective for the reaction,” Medlin said. “In the ACS Catalysis work, we systematically varied the chemical functionality of the organic ligands to identify high-performing catalysts. To take this even further, we are currently working with a group specializing in computational design of catalysts to better understand how these organic catalyst modifiers can be designed based on molecular-scale insight to maximize catalyst activity and selectivity for hydrogen peroxide.”

Medlin’s interest in this topic began as a PhD candidate.“I have always been fascinated by extremely ‘sensitive’ reactions like direct hydrogen peroxide synthesis,” he said. “The problem in reactions of this type is that the compound you’d like to produce is itself quite prone to further reaction, so it is very difficult to stop at that desired product. This difficulty is what has led in many cases to the use of indirect processes with sacrificial reagents that are not very sustainable to practice at large scales.

“I enjoy the challenge of designing catalysts for such processes, because they can have a major impact on industry, and they require creativity to achieve delicate control over the catalyst surface to ‘protect’ the target product.”

This project involved researchers from four institutions. Eranda Nikolla’s group at Wayne State has partnered with Medlin’s group for several years, and provided a focus on synthesizing novel catalyst structures—including core-shell materials—while the Medlin group sought out further functionalization of those structures. Together, they prepared and characterized the catalysts.

Pérez-Ramírez at ETH-Zurich carried out the hydrogen peroxide synthesis studies. Simon Bare’s group at the Stanford Linear Accelerator facility is world-renowned  for their work characterizing the surfaces of catalysts with X-rays. Here, they helped determine which types of organic functionalization could maintain the active phase of the catalyst.