The MRS's teaching mission includes formal undergraduate field courses, which have become an integral part of the academic experience of many CU students. The disciplines of these courses include biology, geography and geology. The MRS also serves as a field facility for academic year CU courses run on the Boulder Campus, and for courses run through other Universities. Several K-12 courses also use the MRS as a site to introduce students to the wonders of field environmental science. Undergraduate and graduate research training programs have used the MRS, including several NSF sponsored Research Experiences for Undergraduates site grants, the NSF sponsored Biosphere/Atmosphere Training Program, and the Department of Education sponsored Summer Minority Access to Research Training. Many of these programs are particularly oriented to increasing diversity of persons involved in academic research.

The MRS participates in educational experiences for the general public aimed at policy decisions that affect our environment. Through formal interactions with federal agencies such as the US Forest Service, the EPA, and the National Park Service the MRS has provided expertise to help advise regulatory agencies make informed decisions about anthropogenic impacts on mountain ecosystems. The MRS also provides regular summer seminars on subjects of interest to scientists and non-scientists alike. The MRS is also a popular site for symposia and workshops aimed at decision making and information sharing, from CU departmental retreats to national scientific meetings.

The support facilities of the MRS include laboratories, offices, classrooms, cabins, a dining hall, and a bathhouse. Laboratories include the Kiowa wet-chemistry lab, several plant, soil, and chemistry labs within the larger John W. Marr Laboratory Building, and the Tundra Lab located at 3500 m on Niwot Ridge. The MRS also manages the 1200 ha Niwot Ridge Biosphere Reserve for the US Forest Service as a site for research and education. 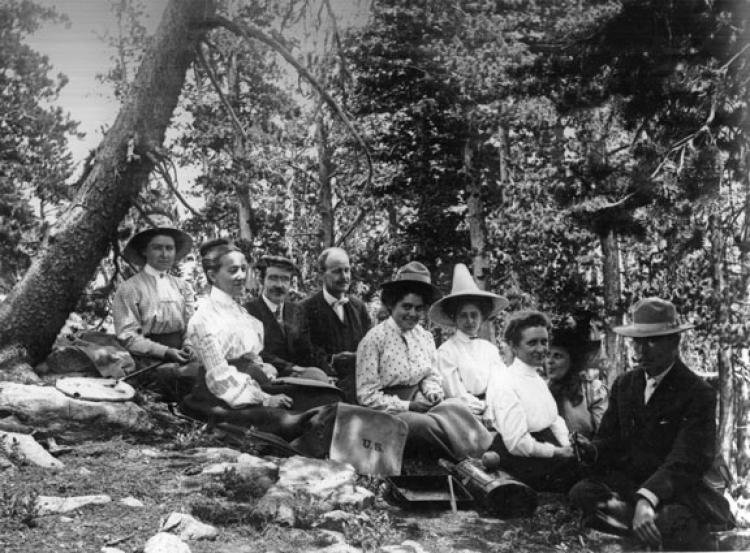 The MRS had its origins in afield station established at Tolland in 1908 by Professor Frances Ramaley (pictured above, with a field course), and in a recreational camp for CU Professors located in the North Boulder Creek drainage, now the City of Boulder Watershed. The present site of the MRS was established in 1920, near Columbine Springs, on property leased from the U.S. Forest Service. The MRS was originally known as Science Lodge and Science Camp. In 1929 Congress and President Herbert Hoover deeded the land to the University. The first field courses were offered in 1921. The present dining hall was built in 1922, along with a classroom building that is no longer in use. Courses continued through the 1920s and 30s, but the camp was closed down during World War II. Following the war Science Camp was used as a recreational and rest base by the U.S. Army. In the late 1940s several student cabins were built, and major utility improvements were made. The popularity of the courses at the camp increased significantly at this time.

One of the most important figures in the history of the MRS, John W. Marr, a Professor of Biology, started his long association with the station in 1946. Marr initiated the Mountain Ecology Project, the Mountain Climate Program, and the East Slope Ecology Project, and was instrumental in the establishment of the Institute of Arctic and Alpine Ecology, which merged with Science Camp as the Institute of Arctic and Alpine Research (INSTAAR) in 1952. Marr's research from the 1950s through the 1970s was some of the finest quantitative plant ecology of the time. He was instrumental in establishing the excellent international reputation of the MRS and Niwot Ridge as an alpine research site. During his tenure as Director the Alpine Laboratory was constructed (1962), which was renovated and rededicated as the John W. Marr Alpine Laboratory in 1982, in recognition of his substantial contributions.