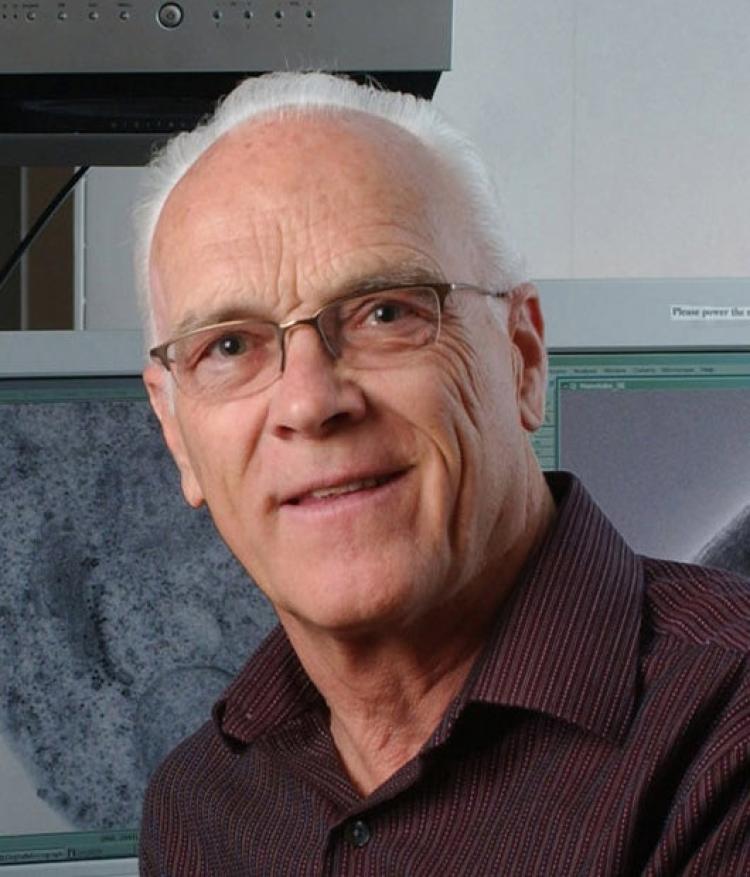 Professor emeritus remembered for his ability to present vital material expertly and for his humor, intelligence and interest in people.

L. Andrew Staehelin, a longstanding member of the University of Colorado Boulder Department of Molecular, Cellular, and Developmental Biology (MCDB) passed away on Sept. 28, 2022. He was 83.

Andrew came to CU Boulder as an assistant professor in 1970, was promoted to full professor in 1978, and became a professor emeritus in 2006. Throughout his career, he was a devoted and skillful teacher who introduced many CU undergraduates to the wonders of cell biology.

His broad knowledge of cell structure and the fundamentals of cell growth and differentiation allowed him to present vital material in an expert fashion. His humor, intelligence and interest in people made this task a pleasure, both for his many students and himself.

Andrew’s research relied upon his expertise in electron microscopy and grew from his commitment to preparing cells for study with the most reliable methods available. He and his students wrote almost 300 scientific papers and book chapters, and he edited several books, earning him several prestigious awards and the admiration of his colleagues.

Andrew was born in Sydney, Australia, on Feb. 10, 1939, but his family soon moved to Switzerland, where he was reared and received his education, culminating in1966 with a PhD in natural sciences from the Swiss Federal Institute of Technology in Zurich.

He did postdoctoral work in New Zealand and then at Harvard with Keith Porter, a renowned electron microscopist. Andrew and his wife, Margrit, moved to Boulder in 1970, joining the newly formed Department of MCDB. He was a proud member of that department until his retirement.

Andrew was known as a stimulating and inspiring teacher who particularly enjoyed the challenges of teaching large courses, such as “Introduction to Molecular and Cellular Biology” and “Cell Biology.” The quality of his undergraduate teaching was recognized with two teaching awards.

His graduate teaching included contributions to the department’s core courses, but his greater graduate focus was on the students in his lab, where his many graduate students and postdoctoral fellows knew him as a rigorous perfectionist who demanded the attention to detail that is essential for high-quality science. Fortunately for all, Andrew’s enthusiasm and optimism sustained the energy of those working with him.

Andrew's lifelong pursuit was the relationship between cell structure and function. His initial method of choice was freeze-fracture electron microscopy, which introduced him to the concept of rapid freezing for the preservation of cells in a good approximation to their native structure. His passion for improving “cryo” techniques culminated with the introduction of high-pressure freezing to the cell biological research community.

This technique has become the standard for studying the structure of cells at the nanoscale. During his final research years, he pushed this analysis into three dimensions by using electron tomography.

During his 36 years with CU Boulder, Andrew took advantage of the sabbatical leave system to work at other universities, learning new experimental techniques and exploring new biological systems. His first sabbatical leave in Freiburg, Germany, was made possible by a Senior Humboldt Award. With support from a CU Faculty Fellowship, he took a sabbatical at his alma mater in Zurich, and for his final sabbatical he returned to Australia to the University of Melbourne as a visiting professor.

Andrew's awards and recognitions included membership in the German National Academy of Sciences Leopoldina, his becoming a fellow of the American Association for the Advancement of Science (AAAS), a faculty recognition award from CU Boulder, the Haselkorn Scholar Award from the University of Chicago, and appointment as a fellow of the Society of Plant Biologists.

Because he recognized the need to increase food production, so the world could feed more people on less land and with less water, he championed the need to exploit the best plant-breeding techniques, including genetic engineering, as well as the best methods for cultivation.