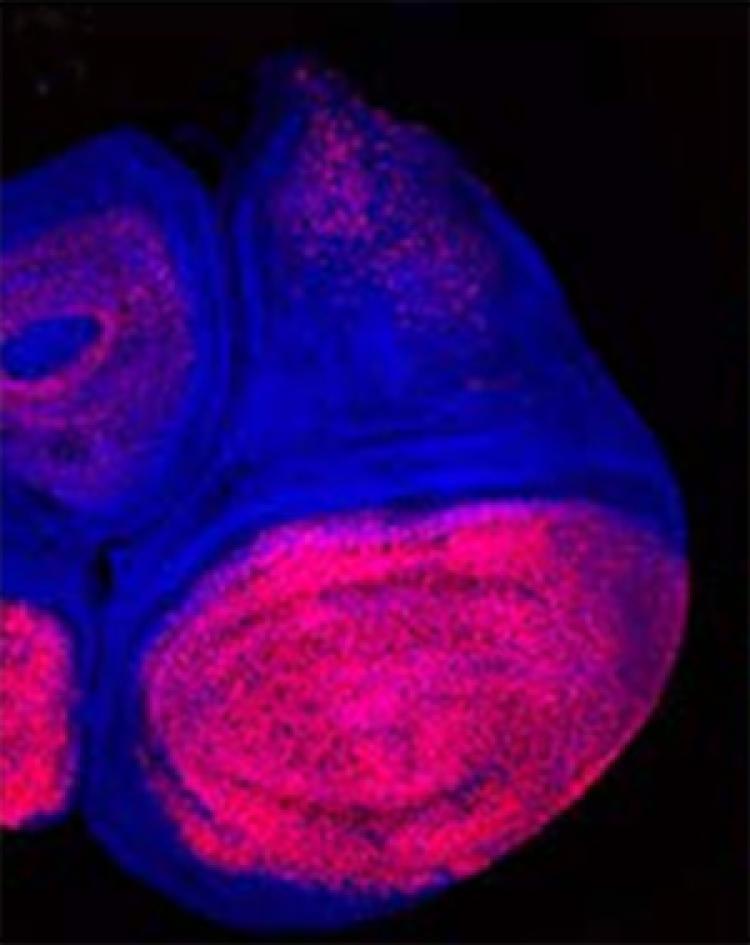 Two studies publishing on the 1st September in Open Access journal PLOS Biology identify overlapping groups of cells in the Drosophila larva that have unique properties. In one case, the cells are resistant to irradiation or drug-induced cell death and capable of moving to areas of damaged tissue where they adopt a new fate and initiate regeneration. The second study examines cells from the same location and reports that, upon inactivation of a tumor suppressor gene, these cells but not others elsewhere in the same tissue take a first step towards becoming aggressive tumors. Both sets of authors discuss potential implications for human tumors.

Drosophila larvae contain so-called imaginal discs, cell groups which form structures of the adult fly during pupation. The discs are 'flat bags' formed by sheets of cells (or epithelia) that are polarized, which means they have a distinct upper (apical) and lower (basal) side. In mammals, similar epithelia cover all surfaces and line all cavities of the body, and many human tumors are of epithelial origin.

Individual cells in the imaginal disc epithelia look the same, but complex expression patterns of different genes indicate functional differences, and it is known that the eventual fate of cells is determined early on. Decisions on cell fate are not irreversible, however. Imaginal discs can regenerate efficiently, even if damaged substantially. Studying regeneration, Shilpi Verghese and Tin Tin Su from the University of Colorado in Boulder, USA, started their work by irradiating Drosophila larvae, which causes extensive cell death in the imaginal discs.

The researchers discovered a subpopulation of cells in wing imaginal discs that is resistant to the cytotoxic effects of radiation and drugs. While other cells die, these cells survive. Their survival, the researchers found, depends on two molecular signaling pathways—Wingless and STAT—both of which are conserved in humans. Following tissue damage by radiation, the surviving cells change their location and their destiny, and subsequently fill in for dead cells in other parts of the same organ precursor. These findings, the researchers say, "provide a new paradigm for regeneration in which it is unnecessary to invoke special damage-resistant cell types such as stem cells. Instead, differences in gene expression within a population of genetically identical epithelial cells can create a subpopulation with greater resistance, which, following damage, survive, alter their fate, and help regenerate the tissue".

Yoichiro Tamori and Emiko Suzuki, from the National Institute of Genetics in Shizuoka, Japan, and Wu-Min Deng from Florida State University in Tallahassee, USA, use Drosophila imaginal discs to study the earliest stages of tumor development. Drosophila shares tumor suppressor genes with humans and other mammals and, through genetic engineering, these can be switched off at particular stages during development. Doing so during larval development initiates tumor formation in the imaginal discs, and the researchers focused on these early stages in the wing disc.

Following inactivation of the tumor suppressor, the researchers discovered, tumors always originate from specific regions of the disc. Cells from these 'tumor hotspots' (which share location with the subpopulation of cells identified by Verghese and Su) express conserved signaling pathways that are also active in mammalian tumor cells. These signals were necessary for the early stages of tumor formation in Drosophila discs, but they were not sufficient. Looking in detail at the cellular architecture in the epithelial sheet, the researchers found that the tumor hotspots cells have a rigid structural architecture on their basal side. Pro-tumor cells from such hotspots bud off the apical side of the epithelium and start tumorous overgrowths. In other regions of the epithelium, the basal side of cells is more loosely structured and pro-tumor cells are pushed out basally from the epithelial tissue by the surrounding normal cells and eventually die. The researchers also found that once pro-tumor cells are pushed out apically of the epithelium, the endogenously active JAK/STAT signaling allows them to undergo proliferation rather than cell death. Tamori, Suzuki, and Deng conclude, "our findings indicate that two independent processes, apical delamination and JAK/STAT activation, are concurrently required for the initiation of [...] tumorigenesis". "Given the conservation of the epithelial cytoarchitecture", they suggest, "tumorigenesis may be generally initiated from tumor hotspots by a similar mechanism".

Concerning their study's potential implication for radiation resistance in humans, Verghese and Su note that in mammals, deregulation of the Wnt and STAT pathways is implicated in resistance to cytotoxic cancer therapy. Consequently, the researchers suggest that Drosophila cells that are protected from cell death by Wg and STAT and participate in tissue rebuilding after radiation damage "may provide a unique opportunity to study how these conserved signaling pathways ensure survival and regeneration in a genetically tractable model organism".

Provided by: Public Library of Science