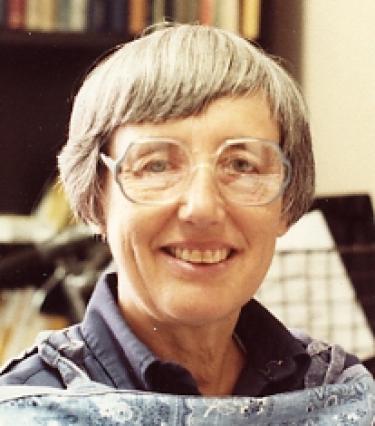 Rebekka Struik was born and raised in eastern Massachusetts where her father (Dirk Struik) was a Professor of Mathematics at M.I.T. This probably colored her final career choice. After a brief flirtation with chemistry at Swarthmore, she switched to a math major and graduated in 1949. She continued her math education with an MA from the Uni- versity of Illinois. She married in 1952 and obtained a Ph.D. in theoretical math at NYU in 1955. Two daughters were born before she became a math instructor at the University of British Columbia from 1957 to 1961 where her husband went to medical school. They then returned to the U.S. where she became an Assistant Professor in the CU Math Department from 1961 to 1963 while her husband did his internship and residency in Denver. This was followed by a stint at CU Colorado Springs from 1963 to 1968; her third daughter was born there. She returned to CU Denver from 1968 to 1970 during which time her marriage broke up. In 1970, she came to CU Boulder and she retired as a Full Professor of Mathematics in 1998.

During her academic career, she enjoyed parts of sabbaticals at the Australian National University in Canberra, Australia in the 1970’s and at Smith College in the 1990’s.

Rebekka’s oldest daughter, Marion, was a tenured professor of virology at Louisiana State University in New Orleans until Hurricane Katrina closed things down. She still lives there with her young son, Shafir, a 6th grader. The middle daughter, Margo, is retired as a journalist for the San Francisco Chronicle and lives there with her husband, retired from the rival San Francisco Examiner. Their daughter, Kenny, is a freshman at Oberlin. Rebekka’s youngest daughter, looEase (originally Louise) has a theater degree from Northwestern and has been involved with theater activities in New York.

Rebekka is a political activist, and is a member of the Colorado Social Legislation Committee and the League of Women Voters. She enjoys Elderhostel's, playing the recorder, reading mystery novels, hiking and likes to knit. She was raised a Unitarian and is a member of the Unitarian-Universalist Church of Boulder. She moved into FMRC in March, 2009.