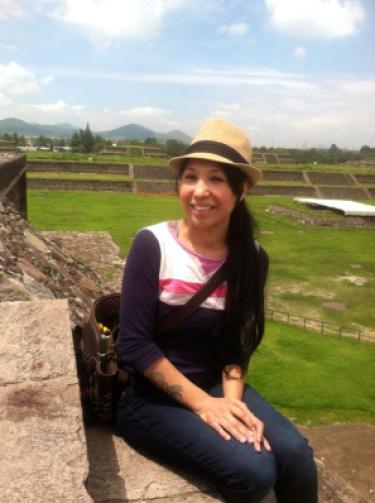 Gabriela Raquel Rìos is an assistant professor of cultural rhetorics in the Program for Writing and Rhetoric and the Ethnic Studies Department. As a Chicana rhetorician, her work focuses on rebuilding and reclaiming indigenous Chicanx/a/o rhetorics. Using decolonial and anticolonial frameworks, her published work has looked at how Indigenous peoples resist ongoing colonization and critically examines how indigeneity and indigenous knowledge circulates in social movements and public discourses.

In her current book project, tentatively titled (Re)Assembling the Biolcultural Human: Repressed Rhetorical Traditions of Anahuac and Tawantinsuyu, she uses a bruja methodology to bring Sylvia Wynter’s notion of “genres of the human” to bear on rhetorical genre studies to better understand and challenge the ways in which Western scientific discourses on the human write over and obscure indigenous feminist and feminized ways of being and knowing. As a response to Wynter’s call for new genres of the human, the book offers genres of the human born of indigenous relational ontologies that understand the human not as a biological, autonomous being, but as relational praxis. The larger work of this book aims to show how people of Latin America (including the diaspora) have been able to cultivate new forms of (indigenous) consciousness and/or rhetorical identities through struggling with Western scientific discourses that erase or otherwise limit and constrain indigeneity.