Voices at the Table is an opportunity for this journal to highlight current issues arising in the field of education by bringing together developing resources with previously published work on our site.

Voices at the Table - Art as Public Scholarship 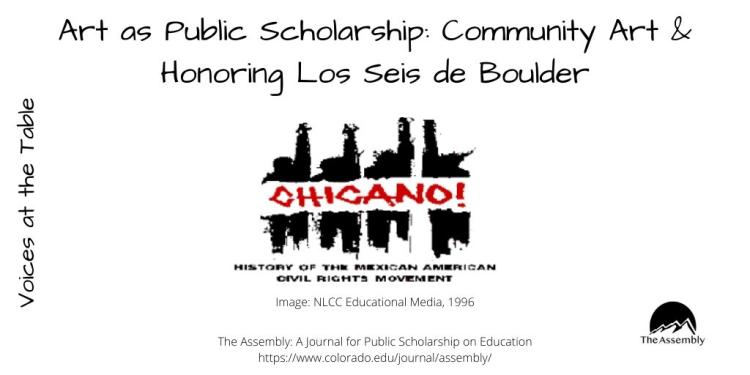 University leaders did not engage in the recruitment efforts, so UMAS students traveled throughout Colorado to recruit Mexican-American and Chicanx students and recruited over 1200 Raza students to the university between 1968 and 1972. In 1972, UMAS alumni, Ricardo Falcon, was assassinated as he traveled to the La Raza Unida National Conference and, in response, the university hired Joe Franco & Paul Acosta as UMAS directors, with the goal of dismantling the organization.

Franco & Acosta began making cuts. In the fall of 1973, UMAS students didn’t get their financial aid. UMAS occupied the Regent building, and the administration finally gave them their aid & other demands. In the spring of 1974, the university announced they were cutting programs that increased minority enrollment. In protest, UMAS took over Temporary Building 1 (TB1) for 18 days, demanding the removal of Franco & Acosta.

During the occupation of TB1 two car bombs killed 6 Chicanx students. On May 27, 1974, Neva Romero, Una Jaakola, & Reyes Martinez were killed at Chautauqua Park by the first car bomb. Less than 48 hours later, Heriberto Teran, Florencio Granado, and Francisco Dougherty were killed at a Burger King on 28th Street by the second bomb, which also injured Antonio Alcantar. The bombings did not receive full investigative attention from police or the FBI, with both groups blaming the bombings on the Chicanx activists themselves. The families and other Chicanx activists have demanded more investigation since the killings, particularly due to the FBI’s efforts to suppress the Chicano, Black Liberation, American Indian, and Puerto Rican Independence movements.

Franco & Acosta were removed, but eventually the university eliminated UMAS as an Equal Opportunity Program. UMAS evolved into a student group and remains today in coalition with Moviemento Estudieantil Chicanx de Aztlán, known as UMAS y MEXA. UMAS y MEXA has been instrumental in the creation of important programs at CU Boulder, including Aquetza and the Student Outreach and Retention Center for Equity (SORCE), continuing with the original vision of UMAS.

Jasmine Baetz, a MFA student at CU Boudler, saw the documentary "Symbols of Resistance," which explores this history. Realizing there weren't markers on campus to remember Los Seis de Boulder, she made a plan, along UMAS y Mexa and other community members. You can stream this movie on Amazon or YouTube.

Jasmine partnered with the community to build a sculpture, which now sits in front of TB 1, commemorating each of the 6 students who died. We interviewed Jasmine and she told us about the process of building this sculpture as a community:

Campus administrators only approved the sculpture for a temporary installation, but Jasmine and others are working to get approval for the sculpture to be permanent. Send any letters of support to los6bouldersculptureproject@gmail.com 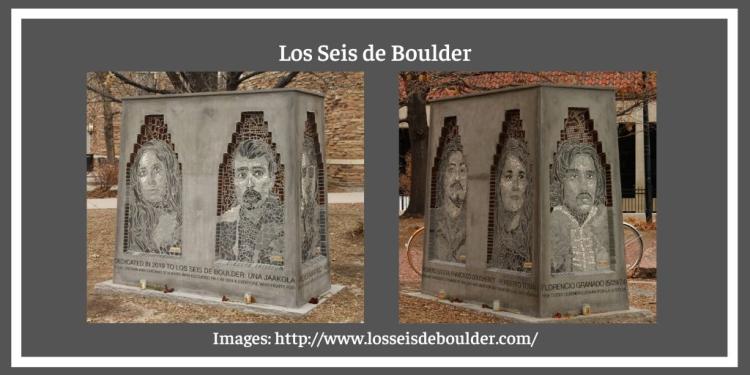 Jasmine is planning another sculpture for the 28th & Canyon site. There will be a Community Making Day, similar to the day she described in her interview on January 18, 2020.

Voices at the Table Archive

Previous Voices at the Table collections can be found here