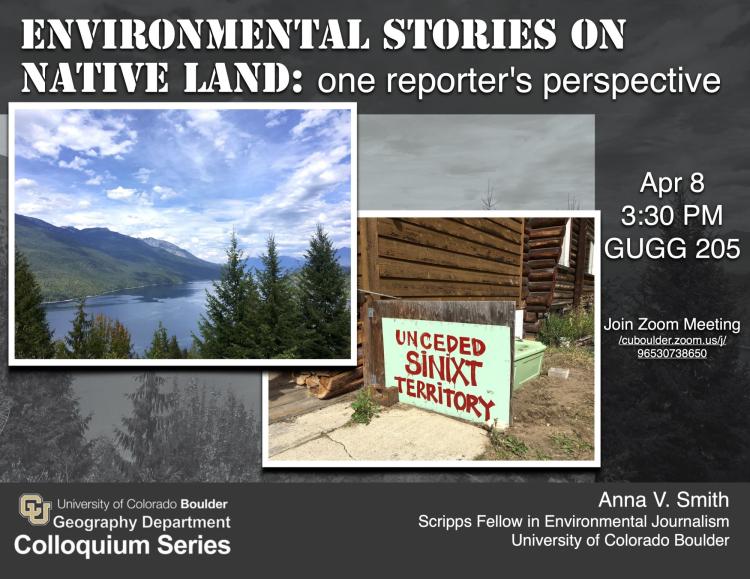 Anna V. Smith is a Scripps Fellow in Environmental Journalism at CU Boulder this year.

Anna V. Smith writes and edits for the Indigenous Affairs Desk at High Country News, a magazine that covers the people and places of the Western United States, where she has covered tribal restoration efforts towards salmon and water on the Klamath River, the struggle for federal recognition by the Chinook Nation and anti-Indigeneity perpetuated in decisionmaking around tribal land restoration. In this talk she will focus on a feature story from 2018, about a court battle to reaffirm transboundary aboriginal hunting rights in Canada brought by the Arrow Lakes Band (also known as Sinixt), one of twelve tribes that form the Confederated Tribes of the Colville Reservation in northeastern Washington state. In 1956, Canada declared the Arrow Lakes Band "extinct," which meant tribal members no longer had rights to the land in the eyes of the government, part of a long legacy of governments criminalizing Indigenous lifeways. The court case, which began in 2010 after a strategic elk hunt planned by the Colville Tribal Council to challenge Canada's declaration, reached Canada's Supreme Court and was decided only last year, in favor of the tribe. The court case could be useful to other tribes whose homelands were bisected by the U.S.—Canada border who want to reaffirm their own aboriginal rights.  This talk will also cover Anna's approach to Indigenous Affairs coverage via systems journalism and the difference between writing "for" instead of "about" communities, a difference that changes the "why" of a story and its final telling.