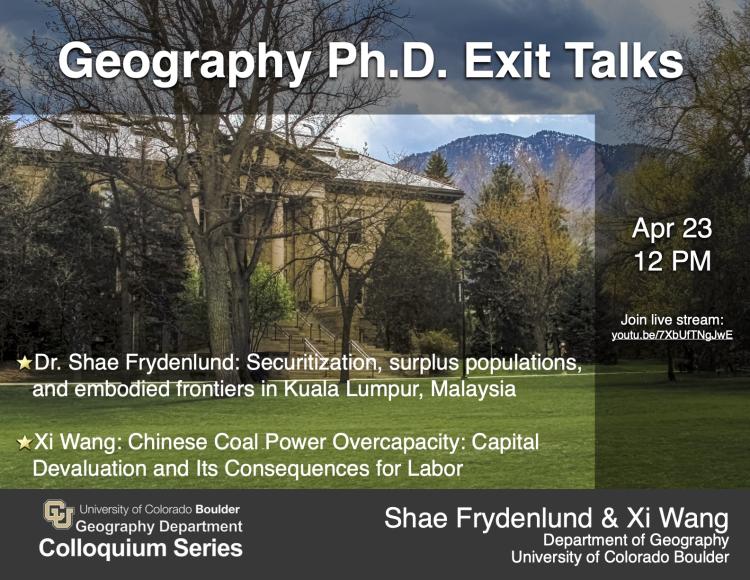 Departing from studies of frontiers that foreground geographical expansion outward, I explore a capitalist frontier that turns inward toward the bodies and work of Rohingya refugees in Malaysia. I articulate intimate geopolitics with a world-ecology approach to examine how the unfree labor of dispossessed, casually employed Rohingya refugees – a ‘relative surplus population’ whose work is only intermittently necessary to capital – is selectively reincorporated into capitalist circuits, and with what effects. Drawing on 9 months of ethnographic fieldwork in a Rohingya enclave adjacent to Kuala Lumpur’s largest produce and meat markets, I argue that interrelated processes of racialization and securitization join to create both embodied borders and unfree refugee labor, which I conceptualize as a moment of embodied frontier-making. Vie

China’s electricity sector suffers from significant overcapacity in coal-fired generation. Between 2000-2018, China built more than 800 gigawatts (GW) of new coal power capacity, accounting for 75 percent of all new coal capacity worldwide. This continues despite the falling rate of power demand growth, which reflects the slowdown in China’s economy. I argue that it is a mistake to see power overcapacity as the product of bad planning, but rather, that overcapacity stems from China’s broader problem of capital overaccumulation as a result of its export-oriented economy. I examine the relationship between coal generation overcapacity and the subsequent capital devaluation in the autonomous region of Inner Mongolia. Chinese leadership has been able to both maintain economic growth and social stability in the near term and channel the burden of devaluation away from state-owned enterprises (SOEs) by directing much of China’s excess capital into generation infrastructure. Overbuilding generation capacity has enabled China to maintain social stability by creating projects that provide jobs and make use of China’s surplus commodities. The labor of migrant construction workers is required to transform surplus capital into fixed capital to produce returns. A three-part configuration used in plant construction enables SOEs to offload devaluation at the margins to construction workers. Bearing the fallout of devaluation ‘wastes’ workers’ bodies and manifests in their living and work environments, and wage payments. This led to hitherto low-level and geographically-diffuse, but persistent worker strikes and blockades. Such forms of rent seeking increasingly cuts against the central state’s desire to maintain social stability in the long term.