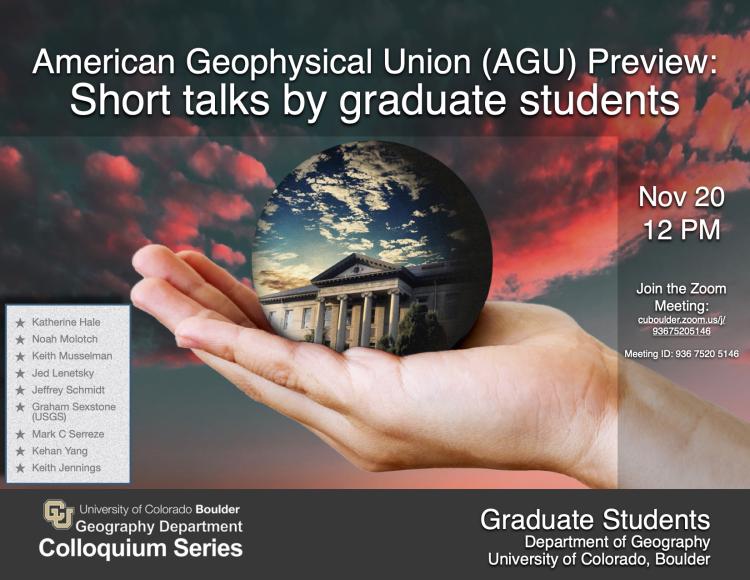 Water Towers of the West: Where are they and how have they changed?
Katherine Hale

Snow-dominated mountainous regions rely on accumulated snow and snowmelt for water supply, and the storage of water in the snowpack delays and extends the downstream delivery of meltwater through the spring and summer months, when water demand is highest. Climate warming, however, has reduced snowfall across the western United States, reducing the annual snowpack and shifting snowmelt toward earlier in the year. These hydrologic changes alter the timing of surface water inputs (SWI) associated with rainfall and snowmelt and ultimately the catchment and regional hydrologic signatures. In this research, we derive an index of seasonal snowpack water storage, termed the Water Tower Index, which is based on differences in seasonality between precipitation and SWI. We define mountainous water towers as regions where there is significant temporal misalignment between precipitation and SWI, indicating a delay in meltwater production due to water storage in the snowpack. We used output from the Variable Infiltration Capacity (VIC) model from 1950-2014 to evaluate trends in WTI associated with regional warming. Evaluating the western U.S. by snow fraction, we determined that, on average, areas with an annual average snow fraction of >0.25 have experienced a significant decrease in annual WTI. This suggests that the delay in the timing between falling precipitation and SWI generation is becoming smaller, likely due to changing precipitation phase (snow to rain) and earlier snowmelt, both a product of climate warming. Future changes in WTI have broad implications for water availability and regional annual hydrologic behavior.

We utilize statistically-modeled ocean heat and volume transports through the Bering Strait along with additional predictors to create skillful predictions of sea ice retreat and advance dates in the Chukchi Sea, a key region for shipping and other growing economic activities in the Arctic. Inter-annual variability of June and September oceanic volume transports through the strait can be captured using along-strait surface winds and modeled Ekman transports in the Bering and East Siberian Seas. Combining the modeled volume transports with sea surface temperatures in the Bering Sea in turn enables skillful representations of June and September ocean heat transport (OHT) variability. These modeled OHTs, along with the linear trend in retreat and advance dates, explain 65% and 74% of retreat and advance date variance in the Chukchi Sea at one-month leads. Addition of the retreat date anomaly into the advance date model improves the explained variance of the model to 82%. Using only variables initialized July or earlier, we can explain 75% of the ice advance date variance. Forecast skill can be further increased by improving parameterizations of Bering Strait water temperatures, especially in spring and early summer. These findings are significant in offering a path towards operational forecasts of sea ice retreat and advance dates in the Chukchi Sea in the absence of direct observations of OHT from moorings in the Bering Strait.

Trends for snowpack temperature, density, depth, SWE, and cold content were evaluated for the 1992-2020 winter seasons using the regional Kendall test (RKT) on novel snow-pit data collected from over 50 site locations across the Rocky Mountains, western United States. RKT is a non-parametric test with the proven power of monotonic trend detection in geoscience systems over linear regression by grouping data from certain geographic regions. According to both snow temperature and SWE, the RKT indicates that internal snowpack cold content has shifted toward warming the more massive northern region snowpack and maintaining a colder, less massive snowpack in the southern region. Variations in internal snowpack temperature explained most of the interannual variability in snowpack cold content magnitude in both regions. In the northern region, Thiel Sen’s slope for snowpack temperature was positive indicating the snowpack was warmer in recent years. Thiel Sens’s slope is more suitable for hydrological trend detection than ordinary least squares line fit because it is insensitive to outliers and missing values (which are expected in hydrologic systems). Thiel Sen's slope for SWE trend was generally flat in both regions, indicating little detectable change. High variance around the Thiel Sen’s slope fit for SWE reflects the low correlation that SWE has with cold content interannually. The southern snowpack trend is moderate cooling and the northern snowpack trend is pervasively warmer, which is controlled more by internal snow temperature than SWE. We conclude that northern region snowpack warming promotes less cold content in the future. Measuring and monitoring snow temperature changes is valuable for knowing the spatial-temporal arrival of spring by observing the snowpack in advance of isothermal conditions. Internal snow temperature and SWE data can be useful in multiple fields, including streamflow forecasting, climate change interpretation, and water resource management, among others.

Seasonal snowpack is an essential component in the Earth’s surface hydrological cycle and energy balance. Recent climate warming has caused decreased peak snow accumulation, altered snowmelt rates, and earlier snow disappearance in many mountain ecosystems. Understanding and characterizing the spatial and temporal distribution of snow, often reported as snow water equivalent (SWE), is of crucial importance for assessing water availability to surrounding environments. In this study, we provide a comprehensive assessment of the long-term interannual variability of SWE distributions and snowmelt in the alpine Green Lakes Valley located in the Colorado Front Range. We leverage a physically-based energy and mass balance models, satellite observations of Fractional Snow Covered Area (FSCA), and long-term quality controlled daily meteorological data to estimate SWE distribution. Using a 23-year record of SWE distribution (i.e. 1997-2019), we evaluate the impacts of topographic and climate variables on interannual variability of SWE and snowmelt. Specifically, we use a linear regression model to compare metrics of elevation, aspect, slope, wind exposure, vegetation fractional coverage, and air temperature against metrics of SWE variability, including the temporal coefficient of variation in annual maximum SWE, the standard deviation of annual maximum SWE, the range in maximum SWE, maximum and average snowmelt rate, and snow disappearance date. The historical relationships between SWE distribution and topography have the potential to elucidate potential ecosystem response to future changes in snowpack and associated impacts on eco-hydrologic processes.