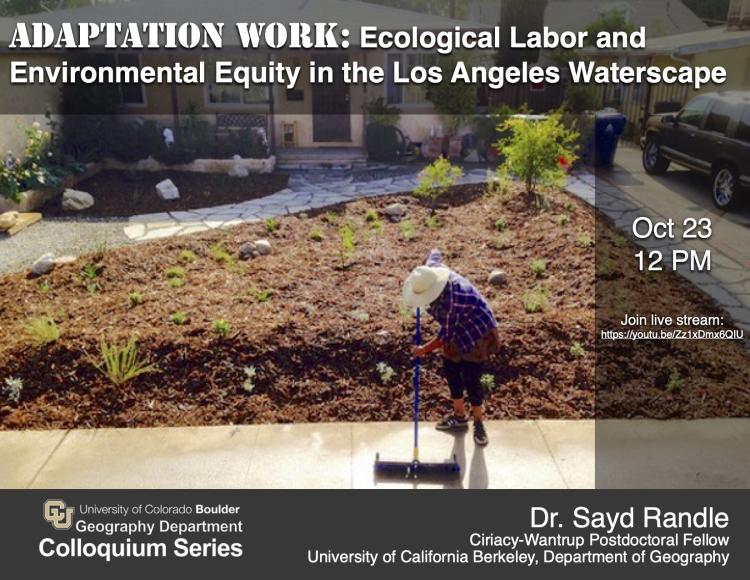 Abstract
Efforts to reconfigure the Los Angeles waterscape are driven by the anticipated impacts of global climate change. In the LA context, achieving “resilience” in the face of these conditions is now widely understood to entail reducing dependence on faraway water sources, which currently provide roughly 90% of the city’s water. Climate modeling suggests that in-city water sources, particularly rainwater and wastewater effluent, are likely to be less affected by both changes in the region’s climate patterns and competing claims of ownership. As such, these “new” waters are trumpeted by local politicians, water managers, and environmental activists as the ideal supplies for the city’s future – if only LA can find a way to capture, clean, store, and distribute them. While understood as a buffer against an anticipated future crisis, the efforts to manage these waters are already changing everyday spaces and practices within the city. This talk focuses on the redistribution of work within the waterscape that the replumbing entails. Many of the interventions approach urban terrain as space that can be managed to provide a particular ecological function, absorbing and percolating wastewater and rainwater into the city’s subsurface aquifers. As such, metropolitan land is framed not only as “nature” – in itself, a substantive shift from dominant North Atlantic ideas about urban space – but as natural infrastructure for the city. The interpretation has implications for day-to-day life in the city, as managing land to provide these functions demands a new kind of long-term collaboration between human actors and more-than-human natures. The talk demonstrates how, when an urban landscape is reimagined as a space for producing public water supply, new forms of inequality can emerge as selected landscapes within the city are managed to provide water for the entire city.

Bio
Dr. Sayd Randle is an ethnographer, a political ecologist, and a Ciriacy-Wantrup postdoc affiliated with UC Berkeley’s Department of Geography. She holds a PhD from the Yale School of the Environment’s combined degree program in environmental studies and anthropology, as well as an MPhil in geography from the University of Cambridge. Her research explores the spatial and cultural politics of urban climate adaptation, with a focus on water management in the U.S. West.