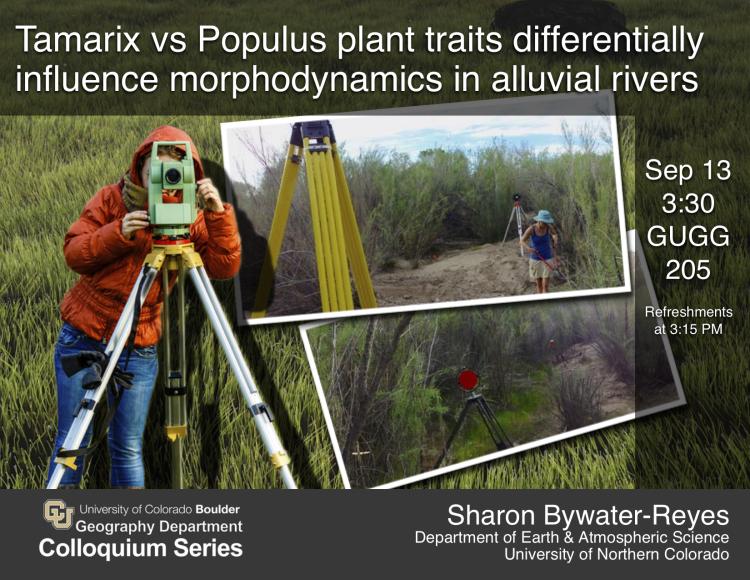 The strength of interactions between plants and river processes is dependent on plant traits such as stem density, plant frontal area, and stem bending properties. In many rivers, the composition of riparian vegetation communities has changed because of exotic species invasion and shifts in hydrology. In particular, Tamarix has invaded many U.S. Southwest waterways, displacing native pioneer vegetation such as Populus. Tamarix invasion has typically been concurrent with geomorphic changes such as channel narrowing and aggradation, as well as with decadal to century-scale hydrologic shifts toward lower peak flows. Differences in plant traits between Tamarix and Populus may contribute to accelerated channel changes in the presence of Tamarix. We investigated whether Tamarix and Populus differentially affect hydraulics, sediment transport, and river morphology with a combination of flume, field, and remote sensing approaches spanning the individual seedling to river-corridor scales. Here, we synthesize our findings linking plant traits to morphodynamic interactions across scales through the lens of the Tamarix problem, while also drawing on recent advances from the literature. We found in experiments, Tamarix required ~50 % more force to bend compared to Populus, accounting for size differences among plants. In multiple flume studies, we found that, as a result of its crown morphology, stem density, and resistance to pronating (bending), Tamarix had a greater influence on near-bed flow velocities, and subsequently sediment transport, in a manner that favored aggradation. In the flume and field, we found that young (< ~1 yr) plants of both species were resilient to uprooting by flood forces alone, requiring bed scour for uprooting to occur, with Populus more vulnerable to uprooting compared to Tamarix. At the patch and corridor scales, remote sensing observations confirmed increased aggradation for denser vegetation patches. Furthermore, long-term channel adjustments were different for Tamarix- versus Populus-dominated reaches, with faster geomorphic adjustments for Tamarix. Collectively, our studies show how plant-trait differences between Tamarix and Populus, from individual seedlings to larger spatial and temporal scales, influence the coevolution of rivers and riparian plant communities. This framework could be used in conjunction with plant community and climate projection modeling to predict potential changes to riverine systems under future conditions.