Nature and Nation: Political Ecologies of Extraction and Belonging in Bolivia 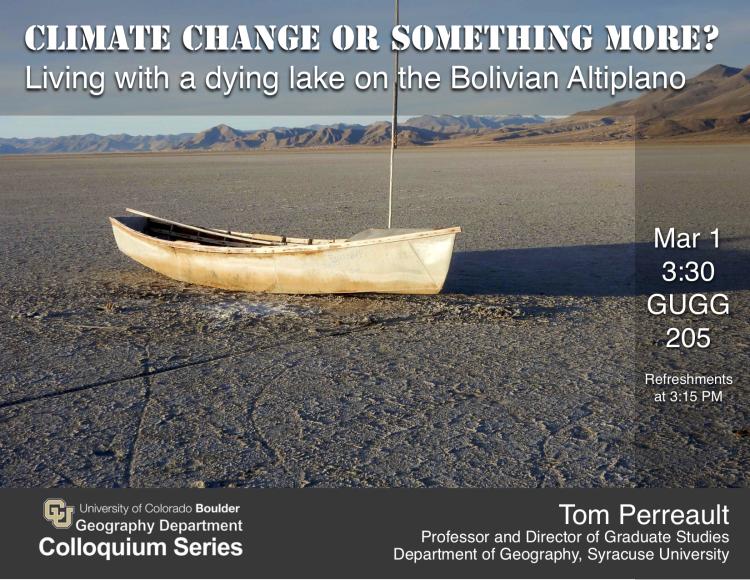 Lake Poopó was once Bolivia’s second-largest lake. Located at roughly 3700m in the semi-arid central Altiplano, shallow and saline Lake Poopó has long been recognized for its ecological importance and in 2002 was added to the list of internationally important lakes and wetlands included under the Ramsar Convention. In late 2014, with water levels decreasing and water temperature on the rise, local fisherman reported a massive die-off of fish and shorebirds. By mid-2015 the lake had almost completely disappeared, with far-reaching environmental and social implications. While fishing communities around the lake were negatively affected, the greatest impact of the lake’s drying has been experience by the three communities of Urus indigenous peoples, located on what was once the lake’s eastern shore. As a consequence of their historical marginalization – a process that began in the pre-Hispanic era, intensified following the Conquest and has continued into the modern period – the Urus have virtually no land of their own and have historically been dependent on fishing, hunting and gathering in the lake and surrounding wetlands. With the drying of the lake, the Urus communities have experienced high levels of out-migration and deepening immiseration. Based on field research in 2016 and 2018, this talk examines the causes and consequences of the drying of Lake Poopó, and considers the broader political economic context of socio-environmental transformation in the Bolivian Andes. While climate change undoubtedly plays a role in the lake’s drying, long-term warming trends have been exacerbated by water withdrawals for mining, agriculture and urban uses. Thus, prevailing patterns of water governance, in combination with regional drying, have combined to magnify the vulnerability of an already marginalized population.