Risky subjects: vulnerability and uncertainty in the global pesticide boom 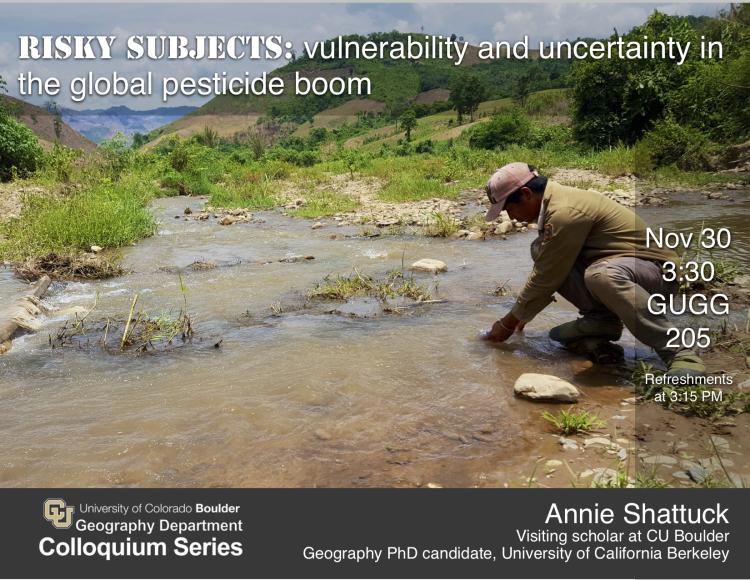 Globally, pesticide use is increasing significantly faster than food production. The vast majority of the world’s food producers depend on pesticides, and most of those users live in the global south. I present data from Northern Laos, until recently among the world’s lowest per capita pesticide users, to explore the everyday life of pesticides and commodity agriculture as it transforms forests, local livelihoods and health. Using oral histories, and socio-economic surveys, I look at the relationship between modern agriculture, vulnerability, and deforestation as old forest-based safety nets are ploughed under for maize to feed growing meat consumption in China and Vietnam. I interrogate the diverse -- and divergent -- set of partial knowledges among pesticide users, and ask how small scale farmers’ direct experiences of toxicity both reinforce and transgress the international model for safe use. I describe the ways that what counts as ‘risky’ and ‘safe’ is locally adapted, filtered through rural community dynamics, and bound up with the other risks farmers are facing – the risks of living at the precarious end of a global commodity chain.

Annie Shattuck is a PhD candidate in Geography at the University of California Berkeley and a Visiting Scholar in Geography at the University of Colorado Boulder. She has spent the last ten years doing community based research on social movements, food sovereignty, and rural change. Her current project draws on political ecology and science and technology studies to examine debates around growing pesticide use, environmental health, and agricultural modernization in the global south. She is a former US National Science Foundation Graduate Research Fellow, a USAID Graduate Research Opportunities Worldwide Fellow, and current fellow at the Institute for Food and Development Policy/Food First. She is the co-editor of the recent book: Food Sovereignty: Concept, Practice and Social Movements.