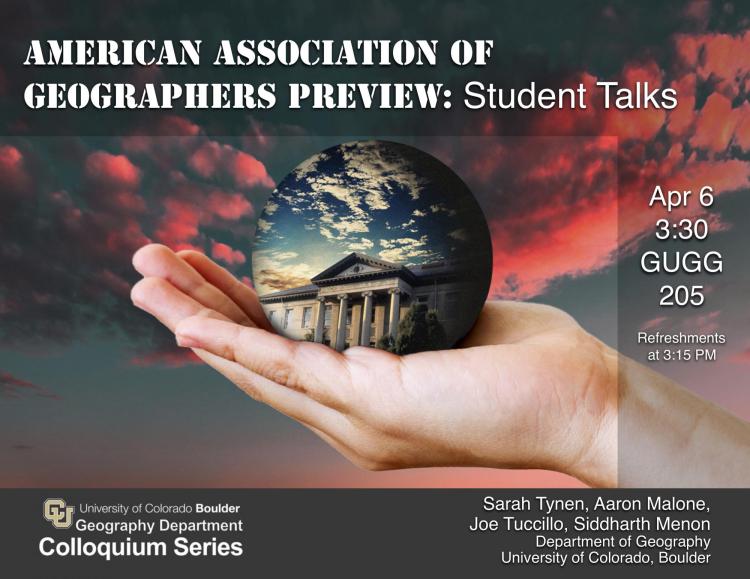 Four Geography graduate students will present a preview of the talks they will give at the American Association of Geographers (AAG) meeting in New Orleans April 10-14, 2018:

By building on the concept of territory as a contested social relation that challenges the state-society dichotomy, this paper explores state territorialization practices as crucial components in shaping everyday life. In particular, it asks: How do citizens experience state bureaucratic power at the neighborhood level in their everyday lives? What is the role of community participation in garnering regime legitimacy? The research draws on 24 months of ethnographic and interview data in the Xinjiang Uyghur Autonomous Region of northwest China. The findings show that the conflict between state control and social membership revolves around the negotiation for territorial control, especially when it comes to struggle for power over minority bodies in nationalist space.

Recent decades have seen rapid growth of diaspora strategies – efforts by migrant-sending countries to engage their emigrants abroad, under the assumption they can contribute toward development goals. There has also been a formalization of diaspora engagement efforts and the emergence of new agencies and programs. I examine how the formalization and bureaucratization of diaspora-state engagement has influenced relations between migrants, migrant organizations, sending communities, and sending-area governments. I focus on the example of Mexico’s 3x1 Program, a matching grant scheme through which the Mexican government partners with migrant organizations to build infrastructure in migrants’ hometowns. The 3x1 Program’s institutionalization has created gaps between policy and practice, yielding numerous unintended consequences. I show how these issues emerged across multiple levels. Most fundamentally, the basic assumptions built into the policy model romanticize migrant organizations and create unrealistic expectations for their involvement. Secondly, the mechanics of program operations also create mismatches between mandated processes and practical limitations the stakeholder groups face. These problems are known to officials, yet change to the program has been minimal over its fifteen years of operation. The contradictions and issues in the functioning of the 3x1 Program provide insights into Mexico’s relationship to its diaspora. Though presented as a community development program, the practical goals seem to center on a ceremonial embrace of migrants and a strategic strengthening of hometown-focused migrant organizations abroad, while the actual development projects are mostly left to hometown mayors and business-as-usual processes.

Within the spatial sciences, social vulnerability--or the potential for individuals, groups, or households to be harmed by a hazard event or disturbance--is often viewed as a place based construct. It is assumed that the vulnerability of places (neighborhoods, cities) can be measured through aggregate characteristics linked to socioeconomic hardship. Yet measures of social vulnerability constructed from aggregate data mask understanding of how individuals are themselves vulnerable. While there is ample evidence that different places have different levels of social vulnerability, without attention to individual context, it is not at all clear how to efficiently translate aggregate-level vulnerability metrics into policy or operational response. We argue that social vulnerability emerges from the social interactive properties of place. If one could understand vulnerability from an individual level, one could craft policies that address the specific vulnerabilities of the people in a place whilst still accounting for the collective (area-level) concerns. Moreover, viewing vulnerability as an emergent construct allows us to target vulnerable individuals within affluent (less vulnerable) places. In this paper we develop a new way of thinking about vulnerability based on measuring vulnerability at the individual level (using survey responses from the US Census), statistically geo-locating individuals to census tracts, then ranking tracts based on their composition of vulnerable individuals. Two test cases for Denver, Colorado and New York City are evaluated. We believe this method is a significant theoretical and methodological advance that enables new ways of incorporating data-intensive science into policy making and public sector operations.

Siddharth Menon: Kuccha-Pakka: Gender and the Materiality of Concrete in Rural India

Rural houses in the Kangra valley of Himachal Pradesh are undergoing rampant transformation from age-old kuccha ways of building using mud and bamboo, to contemporary pakka ways of building using concrete and steel. Is this change in material infrastructure of building understood equally by all household and community members? When is change in materiality of built space understood as a “gain” rather than a “loss” for rural communities in Kangra? My fieldwork in this region using participant observation and focus groups, reveal a unique gendered understanding of change in material infrastructure of built space. Furthermore, there seems to be an uneven spread to the incremental order of this change, altering some spaces first and some spaces much later. Are all spaces in a house treated equally by this material transformation from kaccha to pakka?  Why do some spaces of a house remain kaccha much later than the rest? What does the materiality of this change tell us about the gendering of these spaces? By drawing on Harvey (2015) and the infrastructure turn, I hope to critically look at the process of transformation in material infrastructure of rural houses in District Kangra, Himachal Pradesh while focusing primarily on the gendered understanding of this process. I argue that it is the inherent materiality of this new pakka material infrastructure, particularly concrete, that provides us with a divergent understanding of this transformation while also affecting the spatial ordering of it.