Andrew Grant: Ethnopolitics and the Chinese City: Urbanizing Tibetans during the era of Commodity Housing 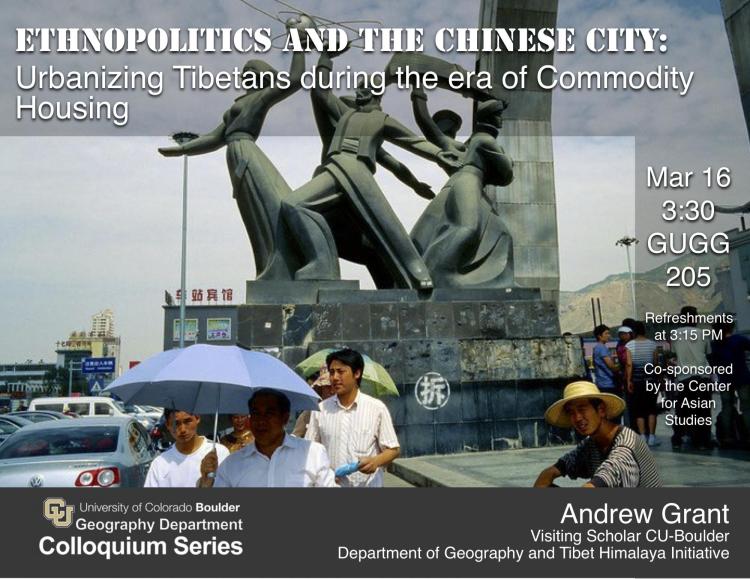 This talk explores how China's urbanization program is recasting the politics of place in the largest city on the Tibetan Plateau, Xining. Urban development discourse and practice is transforming increasing numbers of China’s ethnic population into de-ethnicized urban citizens under the the sign of the Civilized City. The state deploys the city as a biopolitical “civilizing machine” that works to remake and revalue both the city and ethnic minorities’ position within it. New hyperbuilt environments and the cultural associations connected to them rework the ethnic politics of the region and recast different places and groups as either carriers of progress or as “low-quality” remnants that must be reconstructed. I argue that while Tibetans are increasingly enrolled into the biopolitical urban project, they are also selectively rejecting state programs as superficial and less important than religious cultivation and channeling territorial codes to construct a Tibetan urbanism.

Andrew Grant, Visiting Scholar CU-Boulder Department of Geography and Tibet Himalaya Initiative, is a political geographer whose research has appeared in geography and Asian Studies journals. His research interests include the geography of ethnicity and migration as they relate to urbanization and infrastructure development in Asia.

This colloquium is co-sponsored by the Center for Asian Studies.
Hosted by Tim Oakes.