Dreaming of a New World

Dreaming of a New World

As a child, Enrique Lopez had a strong sense of scientific wonder, but his fascination with science education would come later.

“I always enjoyed learning—like all kids do—but not so much school,”he said. “My interest in science was solidified when I failed my first chemistry class.” Lopez was a freshman taking general chemistry at a community college near his home in central California. He enjoyed the content but ultimately realized he wasn’t going to pass. Despite the impending outcome, he finished the course that semester.

"That perseverance is something we grew up with,” Lopez said. “I was used to not always succeeding but still taking a step forward. That’s the work ethic that my parents always instilled in their kids.”

First in community college and then Fresno State, Lopez dabbled in different sciences before returning to chemistry and passing the course, turning his trajectory toward science. While working on his master’s degree, he got involved in an atmospheric chemistry project studying local air quality, and he experienced what it meant to be a scientist.

“It was the aspects of exploration, asking questions, collecting data and trying to make sense of that information—the wonders of science—that offered a different view of what science is and what it could be as well,” he said.

“What could be” continued to be a theme in his doctoral studies at Stanford and today at CU Boulder. Lopez says he was drawn to the CU Boulder School of Education for its strong ties with science departments across campus and mentorship opportunities from other prominent scholars of color. Lopez, with his quiet, compassionate demeanor, admits that being on campus with limited diversity can be difficult, yet he has found “pockets” for community-building and support. Aquetza is one of those pockets. Aquetza, based in CU Engage, is a transformative, 10-day summer residential program for high school students with strong ties to Chicanx and Latinx communities.

It was created by education student Jason Romero Jr., who envisioned reviving a similar summer bridge program from the 1970s. Romero and peers in the student group UMAS y MEXA (United Mexican American Students y Movimiento Estudiantil Chicanx de Aztlán) co-founded the first Aquetza in 2013, and it continues to be led by students today. Somewhat reluctantly, Lopez became Aquetza’s co-director and faculty advisor in 2016. At first, Lopez worried that Aquetza did not fit his research portfolio. Then he witnessed the program in action.

To understand Aquetza, Lopez explained, one needs to understand the historical context of schooling for Mexicans and Mexican Americans, including processes of assimilation and bans on Spanish language. Through readings, discussions and storytelling, the Aquetza youth connect these social and cultural histories with their experiences and begin to see themselves as they have always been, producers of culture and knowledge.

“There’s a strong sense of empowerment when students are exposed to this,” he said. Lopez is still “making sense” of Aquetza, but he said it has broadened his frameworks for student learning and learning environments, and has led him to re-imagine science education as a tool for personal and collective social transformation to better humanity. Aquetza youth, those leading curricula and high schoolers sharing their experiences and dreams, give him hope for the future.

“I feel privileged to be witness to all our youth,” Lopez said. “So often, we focus on everything that’s wrong, but that takes us to a dark place. It’s important that we have opportunities to imagine and dream of a world that doesn’t yet exist, and Aquetza is part of that space to do that.”

In Nahuatl, the language of the Mexica/Aztec indigenous people, the word “aquetza” roughly translates to “lift your chin up.” The title embodies what Aquetza is about: empowering youth to develop connections between academics and community progress, to plan for a future in higher education, and to see themselves as scholars and community leaders. 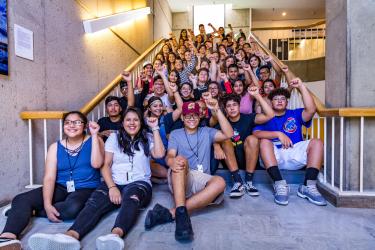