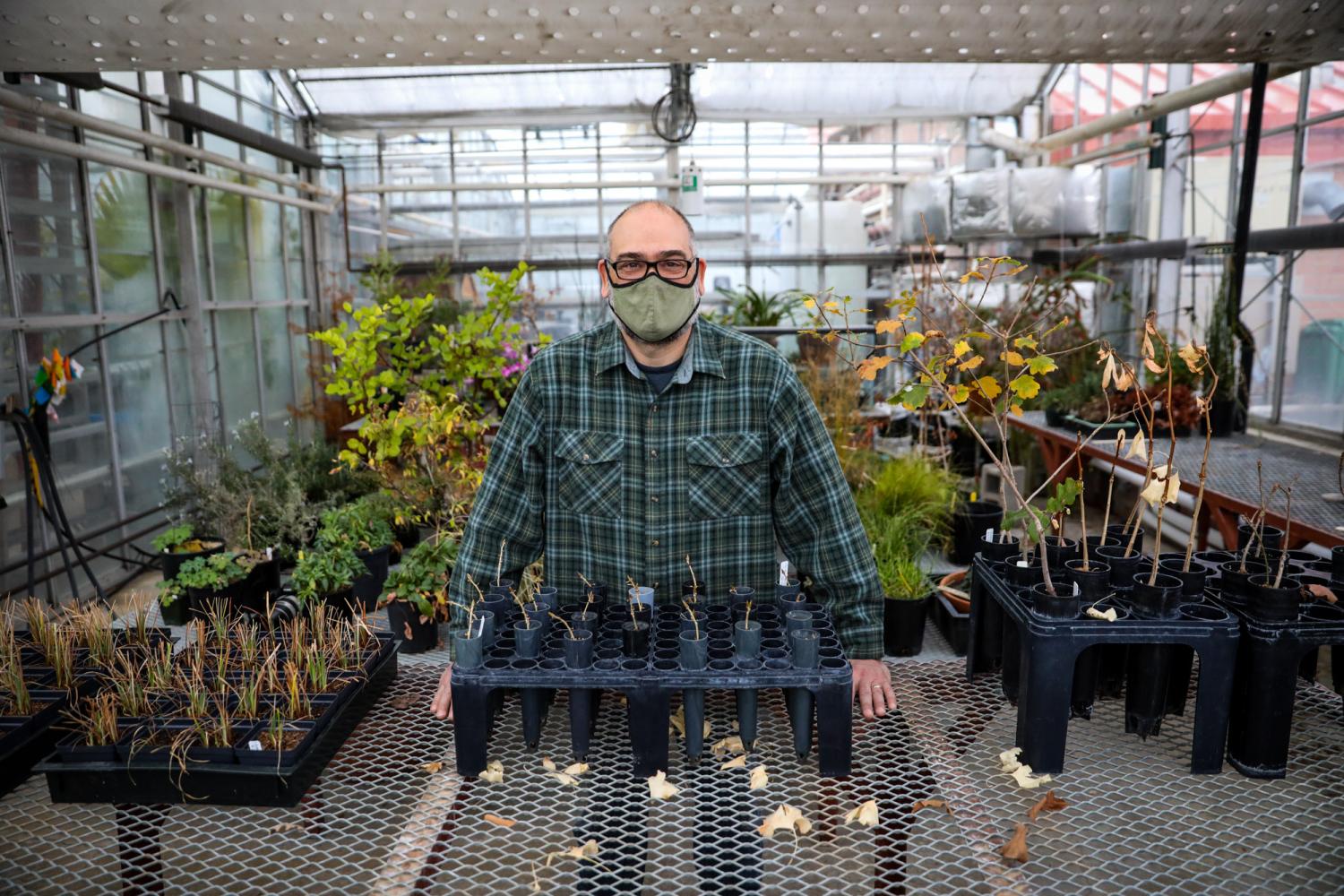 John B. Clark, greenhouse director at CU Boulder’s ecology and evolutionary biology department, with cuttings from the “Old Main Cottonwood” that will be nurtured until large enough to be planted on campus. The tree has been taken down after 140 years.

After living through two World Wars, 27 U.S. presidents, and thousands of graduating students, the beloved “Old Main Cottonwood” on the University of Colorado’s Norlin Quad has been chopped down.

The 142-year-old tree was the tallest and oldest tree on campus, having been purchased for $35 along with 42 other plains cottonwood trees.

Plains cottonwoods only live for about 100 years, and — while the tree looked healthy — it was showing its age below the soil, according to Vince Aquino who leads CU’s campus forestry team.

“It had just timed out and was starting to slow down metabolically, was starting to have more trouble processing energy and gathering energy,” Aquino said. “Starting to lose root tissue, lose root mass, and then, you start to get decay and other issues.”

The signs had been present for years. After several large pruning operations to keep its canopy healthy, Aquino eventually decided they were spending too much energy and money on a losing battle.

“We started to get to where we were losing a pretty major percentage of the tree's canopy and it sort of became evident that we needed to start planning for the removal of this tree,” Aquino said. 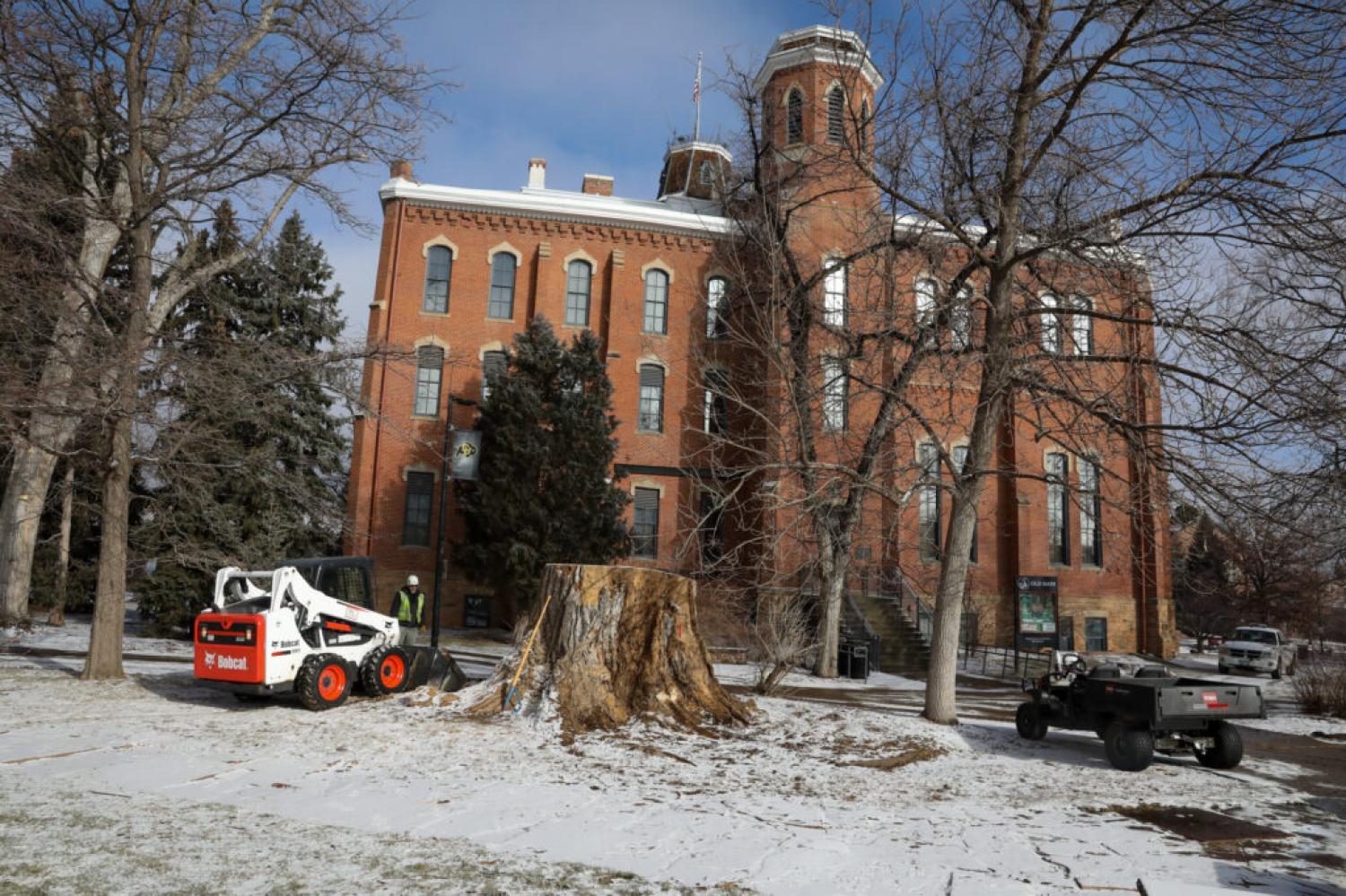 The stump of the “Old Main Cottonwood” on Thursday, Jan. 20, 2022. The tree has been taken down after 140 years, but not before cuttings were taken so that clones of the tree can be propagated. The disc will be saved for artists as raw material.

The tree came down in mid-January, while CU classes were held remotely due to the spread of the COVID-19 omicron variant. Freezing rains poured over Boulder, but that didn’t stop people from paying their respects.

The tree, nearly as old as #CUBoulder, came down on Jan. 17, 2022, more than 140 years after it was planted on Norlin Quad near what was then the only building on campus.
Learn more about CU Boulder’s beloved cottonwood here: https://t.co/Rmm13f7DNA pic.twitter.com/wlKg5wB2k8

The day after crews finished cutting it down, Aquino returned to the stump to find someone’s graduation tassel hanging from the bark. And that wasn’t the only memorial he found that week.

“Some folks left flowers, some people left some bundles of evergreen bows and things kind of bundled together with string and stuff,” Aquino said. “I know a lot of people have been visiting the tree. A lot of people told me they were going to.” 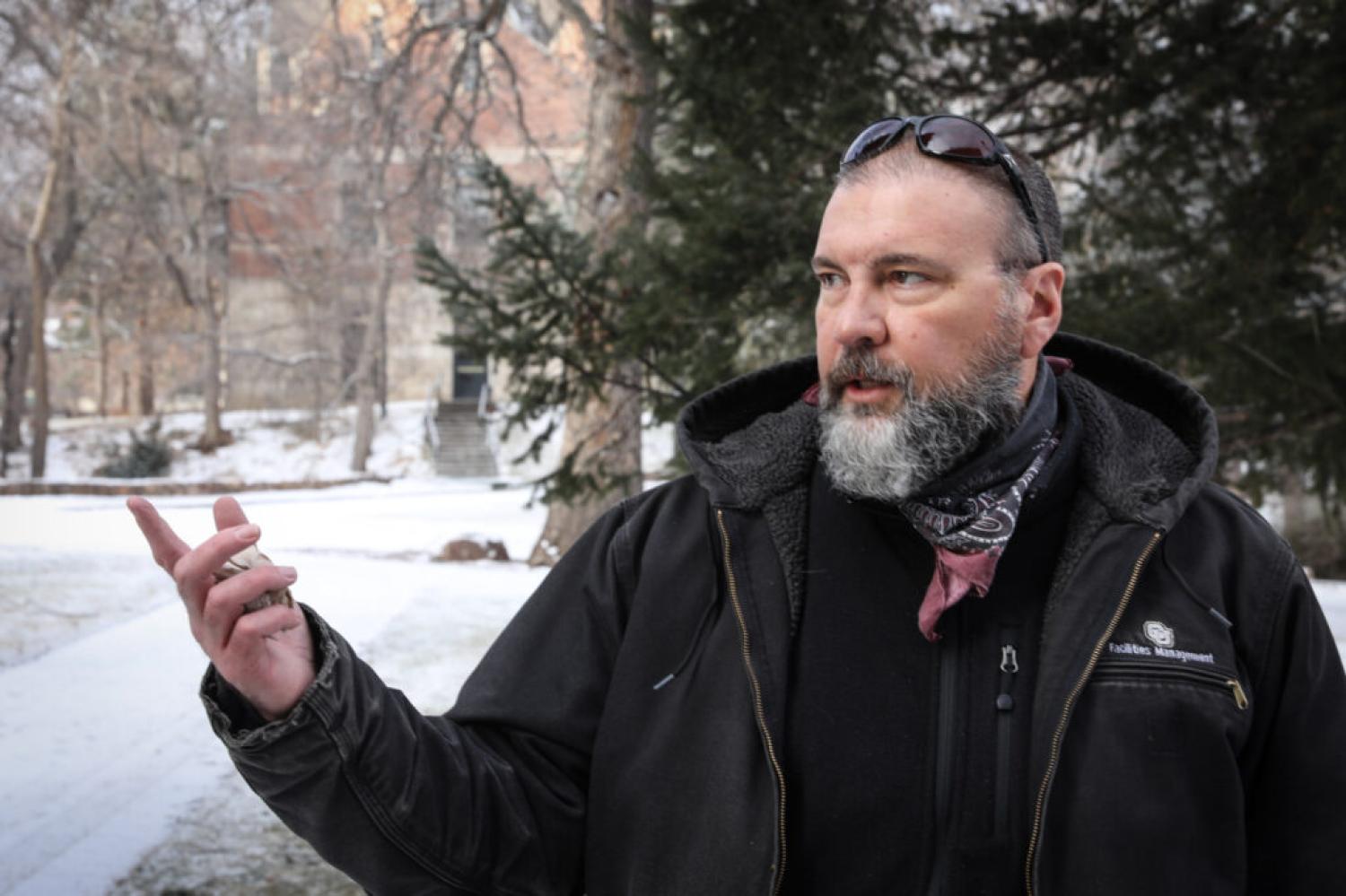 Two of those people were Evan Cantor and his wife, Robin, who worked at the Old Main building for several years before retiring. Cantor described the tree as an “old friend.”

“You'd take your lunch breaks, you go out there and sit underneath that tree or even just an afternoon break,” he said. “ Sit under that tree and look up at it.”

But what Cantor appreciated more was “Old Main Cottonwood’s” constant presence through the decades of change and growth in Colorado, and Boulder in particular. A rare constant in a changing landscape. 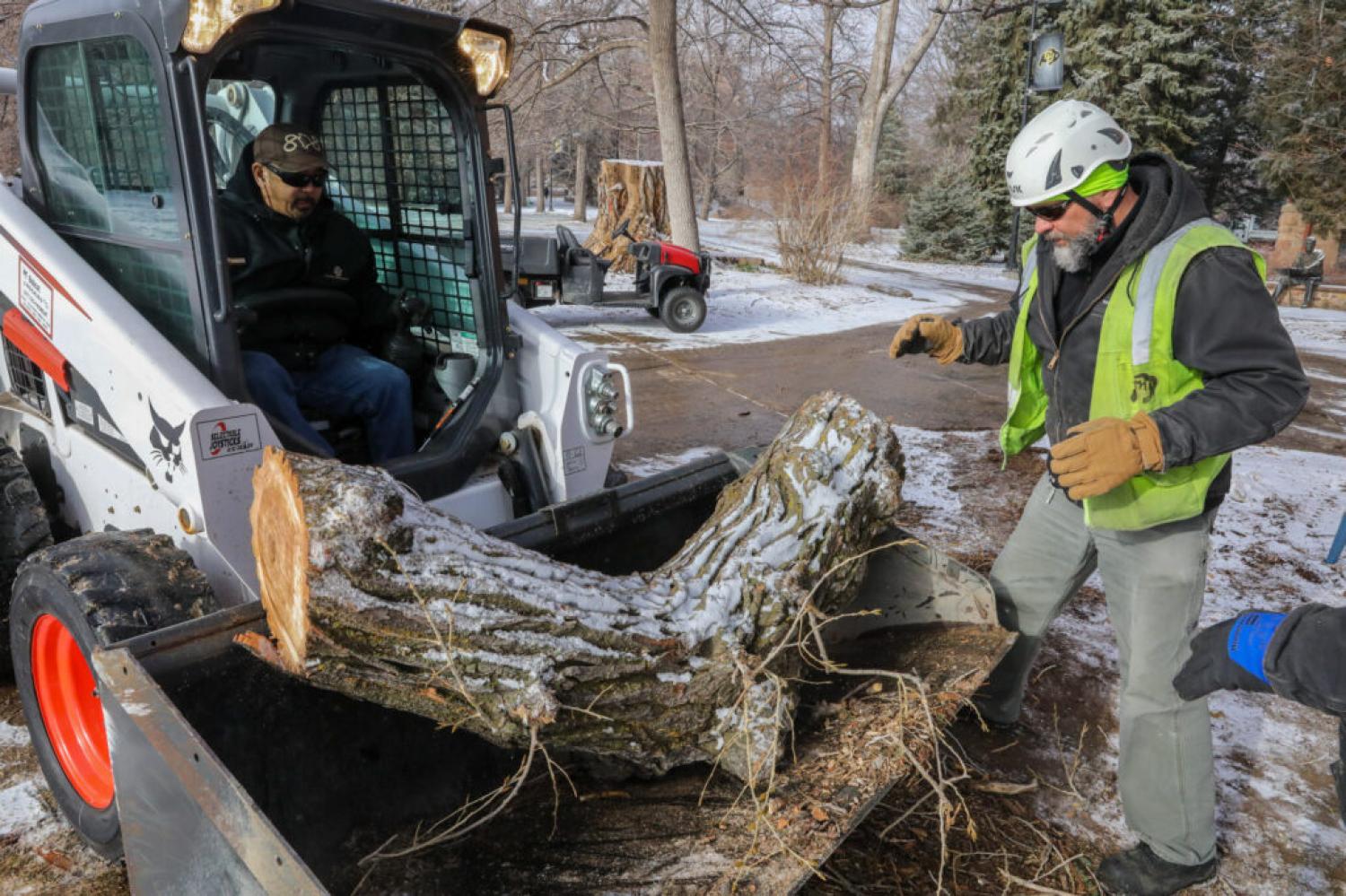 Vince Aquino, CU Boulder forestry supervisor, helps maneuver a limb from the “Old Main Cottonwood” into the bucket of a Bobcat driven by Craig Ogata on Thursday, Jan. 20, 2022.

“Even the men's room, you'd be standing at a urinal and there's a mirror and you'd look up and there's the tree coming through the window on the mirror,” Cantor said. “It was just so ubiquitous. It seemed somehow protective.”

Now Old Main Cottonwood’s 142 years of growth are all but a stump. But Aquino’s team hopes its legacy will live on.

On two separate occasions before its demise, his team collected small branches from the tree and passed them off to CU’s greenhouse. John Clark, the greenhouse director, said if all goes to plan, those branches will turn into clones of the tree — a next generation. 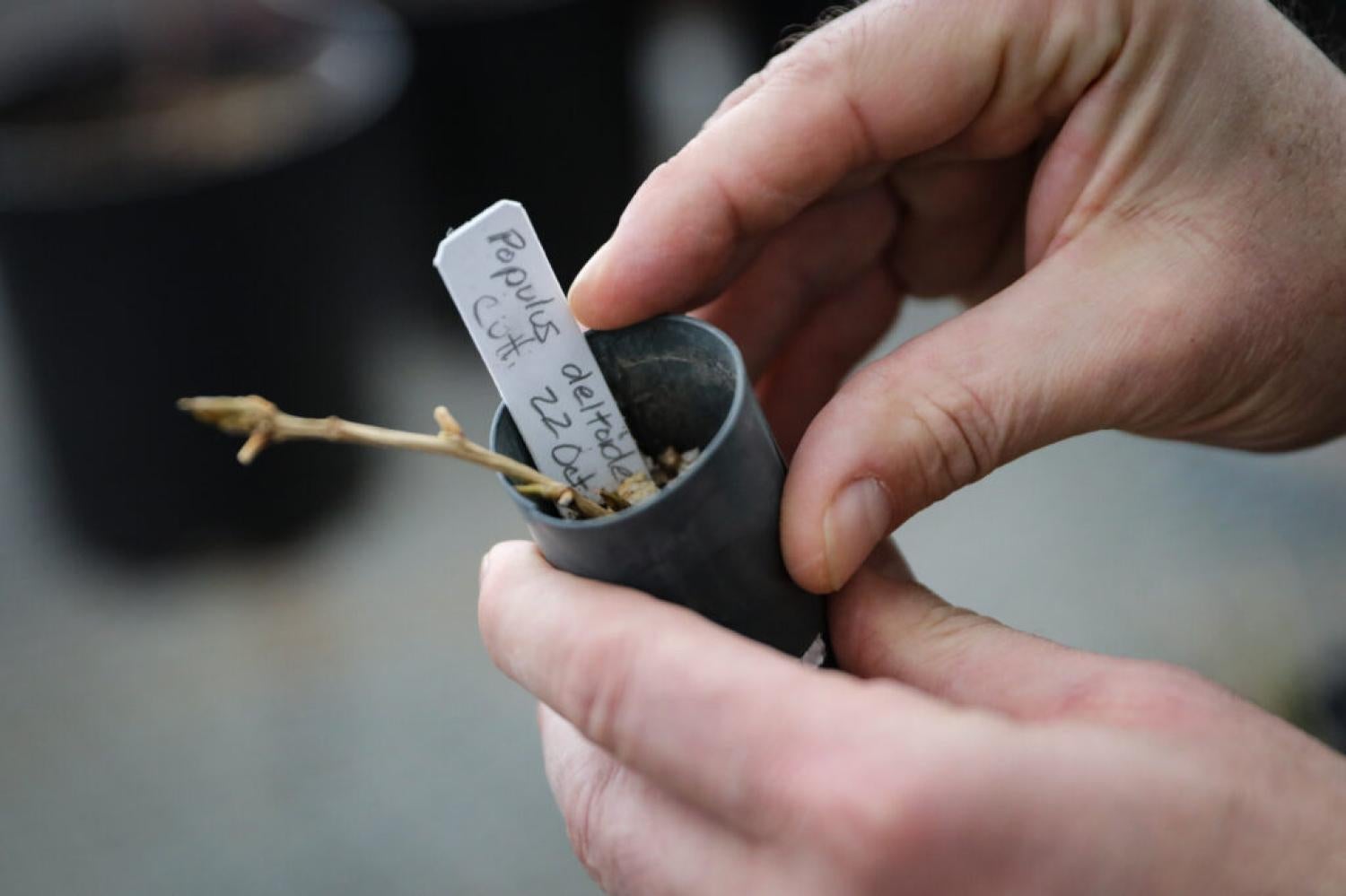 John B. Clark, greenhouse director at CU Boulder’s ecology and evolutionary biology department, with cuttings from the “Old Main Cottonwood” that will be nurtured until large enough to be planted on campus. The tree has been taken down after 140 years.

“Basically we've taken those branches that he brought in, made some four-inch, six-inch and eight-inch cuttings, put some rooting hormone on them and put them in these grow tubes so that they can have soil around, have a little bit of moisture, but not stay wet,” Clark said.

Clark said it's common to try and regrow clippings from a tree with favorable characteristics. Old Main Cottonwood fit the bill because it outlived and outgrew the 41 other cottonwoods it was bought alongside.

There are two batches of clippings. One from 2014, which resulted in six baby trees that will eventually be planted on campus. And one taken right before Old Main Cottonwood was cut down, which has about 25 cuttings. Clark hopes a little more than half of those will survive and get planted. 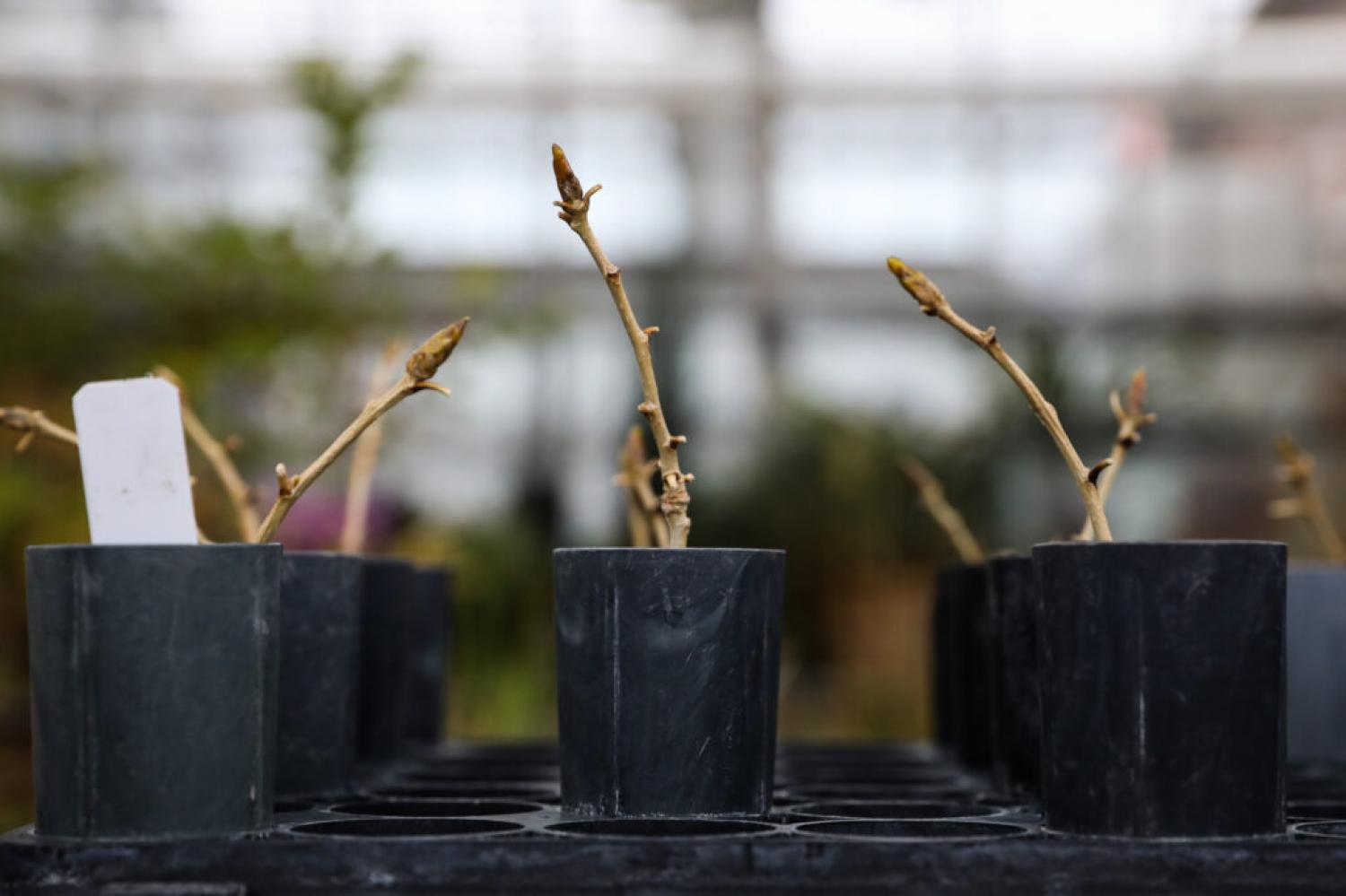 Cuttings from the “Old Main Cottonwood” that will be nurtured until large enough to be planted on campus. The tree has been taken down after 140 years.

“It's gonna be a five- to six-year process,” Clark said. “We've got them in these small tubes. Next year after they root we'll bump them up into two inch tubes, then up into three-inch tubes, then they will go into containers for the last two to three years and then they'll be planted outside.”

At some point during the spring semester, CU will plant one of its clones in the same area and install a commemorative plaque where Old Main Cottonwood once stood.

And maybe, with some luck and good weather, one of those trees will live through another 27 U.S. presidents and thousands more smiling graduates. 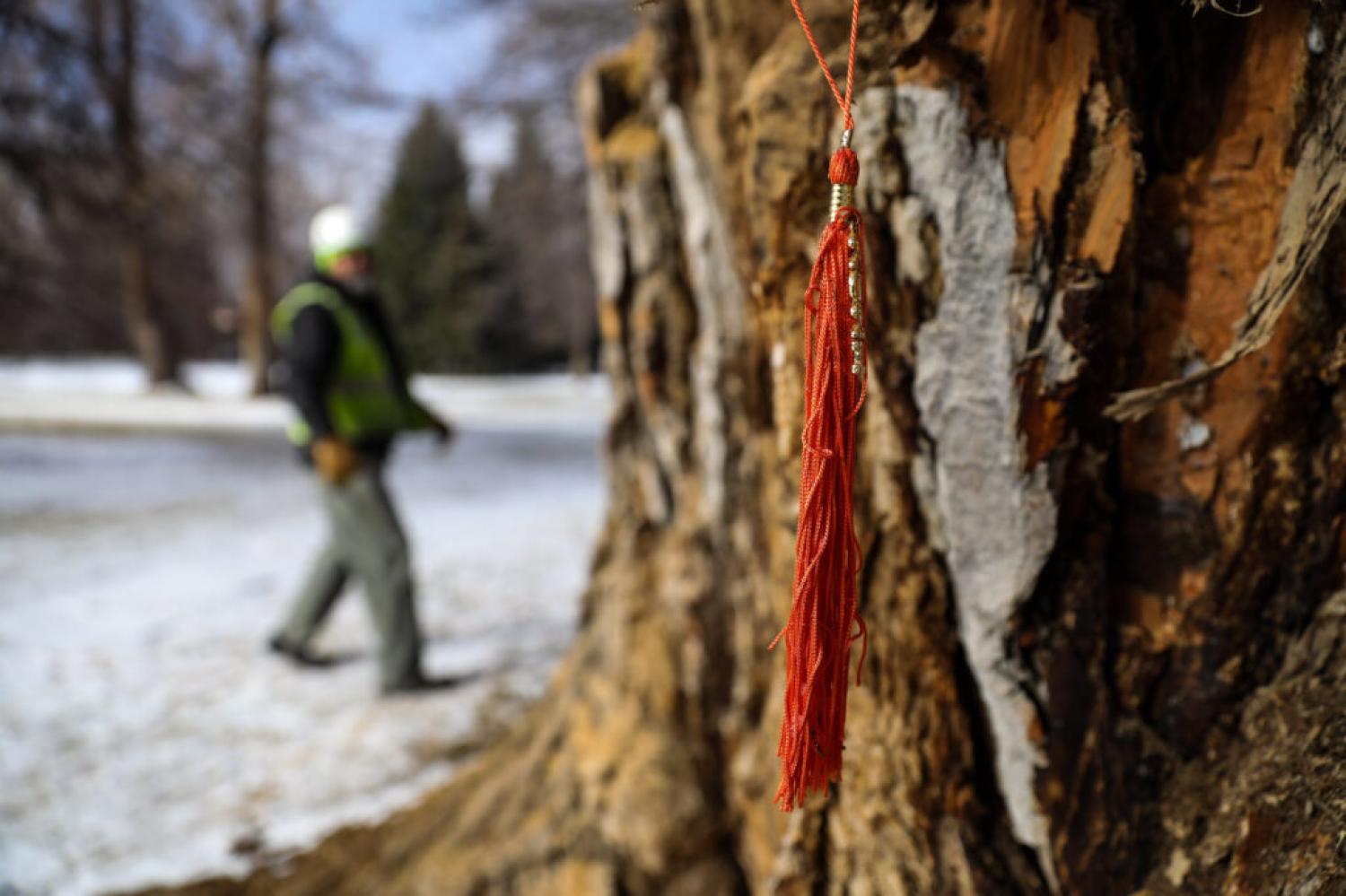 A graduation tassel hangs from the stump of the “Old Main Cottonwood” on Thursday, Jan. 20, 2022.