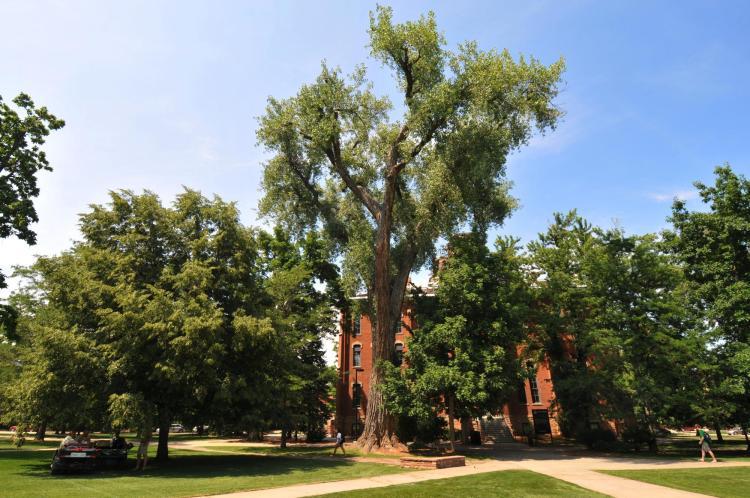 Planted in 1879 or 1880, the “Old Main Cottonwood” is the oldest and tallest tree on campus. At more than 140 years old, 110 feet tall and 19 feet in circumference at the base of the trunk, it has outlived and outgrown all other on-campus cottonwoods that were planted at the end of the 19th century.

However, it is finally time for the tree’s reign on the south side of the Old Main Building to come to an end -- even though its legacy will live on thanks to scions cultivated from it in 2014. The most recent examinations of the tree have indicated a likely steady decline and potential safety risks increasing in coming months if the tree is not removed.

“We have been monitoring the health and risk factors related to this beloved tree for the past several years,” campus Forestry Supervisor Vince Aquino said. “We have done everything to preserve its heritage for as long as possible, and it has lived for more than double its expected lifespan.”

An 1879 voucher from the CU archives showed the university spent $35 out of its general fund for 42 plains cottonwoods, which had a one-year warranty. Plains cottonwoods (Populus deltoides subsp. monilifera) are known as the “pioneer trees of the plains” because of their hardiness and ability to withstand harsh weather conditions. They have an average lifespan of 70 years and reach about 60 to 80 feet in height.

A local contractor will use a crane to remove the tree over Winter Break, when fewer people are on campus. The removal will take at least a week to complete.

The Old Main Cottonwood will find new life thanks to its superior genetics and a desire for its legacy to endure. With its above-average age and height, it is an ideal candidate for cloning; cuttings were taken and rooted in 2014. There are now four six-foot scions in the campus greenhouse that will be planted in the coming years to help preserve the tree’s legacy.

“Our partners at the Ecology and Evolutionary Biology Greenhouse deserve all the credit for cultivating the initial cuttings into healthy scions that are ready to be planted,” Aquino said. “This tree has seen a lot over the last century and a half and I’m grateful that we are getting the chance to allow this tree to continue its life on Norlin Quad.”

The bottom portion of the trunk will be preserved, and during the spring semester, there will be a celebration of the tree with the installation of a commemorative plaque at its base. One of the scions will be planted in the vicinity, and the path next to the Old Main Cottonwood will be renovated to include a small section on the west side of the trunk. Preliminary discussions have taken place about a possible repurposing of some of the tree’s wood, but there are no firm plans as of yet.

CU Boulder is a member of Tree Campus USA and is nationally recognized for its exceptional dedication to trees. Consider making a donation to the Campus Beautification Fund to have a direct impact on the future of campus landscaping.