A strange warbler found in a Pennsylvania backyard is the first-of-its-kind three-species hybrid, indicating nearby endangered warblers might be making the best of a declining population—but at a cost, according to new research from the Cornell Lab of Ornithology and the University of Colorado Boulder.

These findings were recently published by the journal Biology Letters.

“I don’t think we would’ve expected that across such a different part of the warbler evolutionary tree we’d still have offspring produced. They’re genetically very different birds,” said Scott Taylor, an assistant professor in ecology and evolutionary biology at CU Boulder and one of the study’s co-authors.

The small, vocal bird was first spotted in May 2018 by Lowell Burket, a bird watcher, on his property in Pennsylvania. Burket, who is a co-author on the study, had gotten into birding only in the last few years, and immediately noticed when he reviewed a video he took that there was something not quite right about this bird. It looked and acted like both Blue-winged and Golden-winged Warblers, but it sang like, and had minor physical characteristics of, a Chestnut-sided Warbler.

After seeing the bird a few times, he sent a photograph and video of it to the Cornell Lab of Ornithology, where Taylor was previously a postdoctoral researcher. The bird immediately drew the interest of Taylor and David Toews, a fellow postdoc, as the bird was found in an area where Golden-winged Warblers have declined dramatically over the past decade.

“During fieldwork in West Virginia the previous summer, we were having these conversations about, what if Golden-winged and Blue-winged Warblers hybridize with Chestnut-sided Warblers? But we both thought that would be crazy,” said Taylor.

Toews immediately went to the property and retrieved a blood sample from the bird. And, using that sample and genomic tools they had already created from Golden-winged and Blue-winged Warblers, Toews and Taylor established that this mysterious bird was indeed a three-species hybrid.

"I had literally zero knowledge about birds until seven years ago," Burket commented to the Lab of Ornithology. "And now I end up discovering what appears to be a first-of-its-kind bird. It can happen to anybody!"

While the three-species hybrid is interesting, Taylor cautions that it’s hard to say how evolutionary relevant this hybrid is to the grand scheme of warbler speciation and conservation. Rather, it might actually hurt the Golden-winged Warbler, which is up for consideration to be listed on the Endangered Species Act, and the Blue-winged Warbler’s future survival.

And this issue isn’t new. Golden-winged and Blue-winged Warblers have increasingly been hybridizing, thanks in part to a steep decline in their populations stemming from habitat loss in their wintering grounds—Venezuela and Central America.

“It’s maybe rarity of mates that caused this hybridization because the mother just couldn’t find another Blue-winged or Golden-winged to breed with, so she bred with a Chestnut-sided,” commented Taylor.

Toews agreed in a comment to Cornell: "That this hybridization occurred within a population of Golden-winged Warblers in significant decline suggests that females may be making the best of a bad situation.”

Toews and Taylor will continue monitoring this three-species hybrid going forward to see if it will try and find a mate next year, and then, if so, whether the hybrid is sterile or fertile. 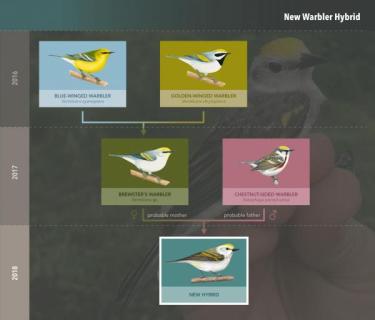 The newly discovered three-species hybrid is believed to have stemmed from a mother, who was also a hybrid, and a Chestnut-Sided Warbler. Graphic by the Cornell Lab of Ornithology. 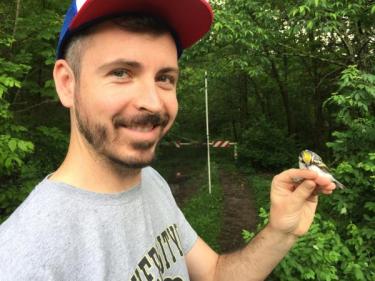