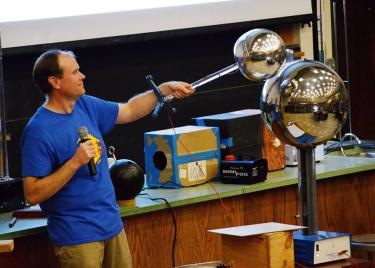 James’ interest in math was fueled at the age of nine by learning to program video games on his first computer, a Commodore 64, which was his all-time favorite Christmas present. A second powerful influence on his eventual career choice was that James had notoriously bad summer jobs.  While scrubbing roadside curbs using acid during a hot Florida summer, James thought "they really ought to hire someone to do this," only to immediately realize that they had, and it was him! He decided then and there that he would work his tail off to make sure that he would not end up doing such jobs for a living!  In junior high school, James wanted to be an engineer. But, in high school he realized that what he really meant was physicist—the people who ask the universe "Why?"

James attended Florida State University, earning a B.A. and M.S in Physics and received his Ph.D. in Physics in 2004 from the Massachusetts Institute of Technology (MIT). His work led to the most precise direct test to date of Einstein’s relationship E=mc2. He received the 2004 American Physical Society’s DAMOP thesis award for this research!  You can click on the link above to learn more about Professor's Thompson's exciting ongoing research! It's happening right here in Boulder!