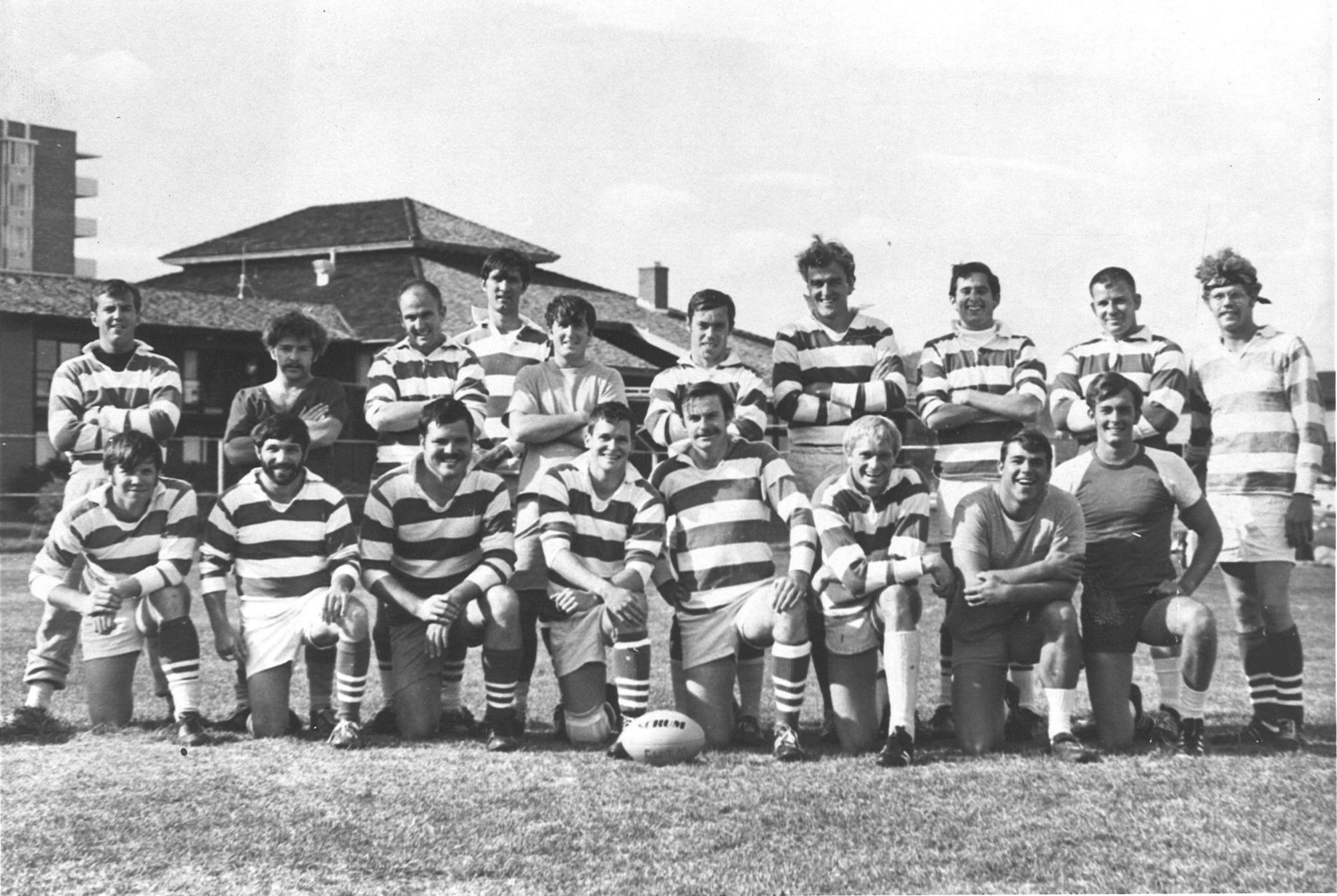 In the spring of 1967, a group of CU law students which included Clark Weaver (Law’69), Bob Machester(Law’69), Rick Ranson (Law’70), Larry R. Gaddis (IntlAf’63; Law’69) and first-year CU law professor Jonathan “Skip” Chase started the CU Men’s Rugby Club. Most had played at other schools as undergraduates, and they were looking to create that same oasis in the troubled land that was university life in the age of Vietnam.

There were only two other teams in the area that first spring, the Denver Barbarians and the Colorado School of Mines. CU practiced and played games across Broadway at Baseline Junior High, with their first game being against the Barbarians.

The spring of 1968 saw the opening of a rivalry with Brigham Young Universty. The BYU team had experienced players from the South Pacific islands, with several of the gentlemen looking like they were “10 X 10.”  The crowd that day was big and the match exciting. CU lost a nailbiter on a penalty kick in the final minutes.

By the fall of 1968 more teams were forming, and the morning before the CU-Air Force football game, the rugby crew played its first match against the newly formed Air Force Academy team. That fall they also played in the first match of the Aspen Ruggerfest tournament’s inaugural year.

The motivation for playing at Ruggerfest was to play against better, more experienced teams from around the country at altitude.

CU rugby was a motley bunch the first couple of seasons, rummaging through the trunk of Ranson’s car before each match to figure out what jerseys they’d wear, but they were building a rugby tradition in Colorado. Fifty years later, the current club is 60 players strong, BYU is still a regular opponent and Air Force is a conference rival. 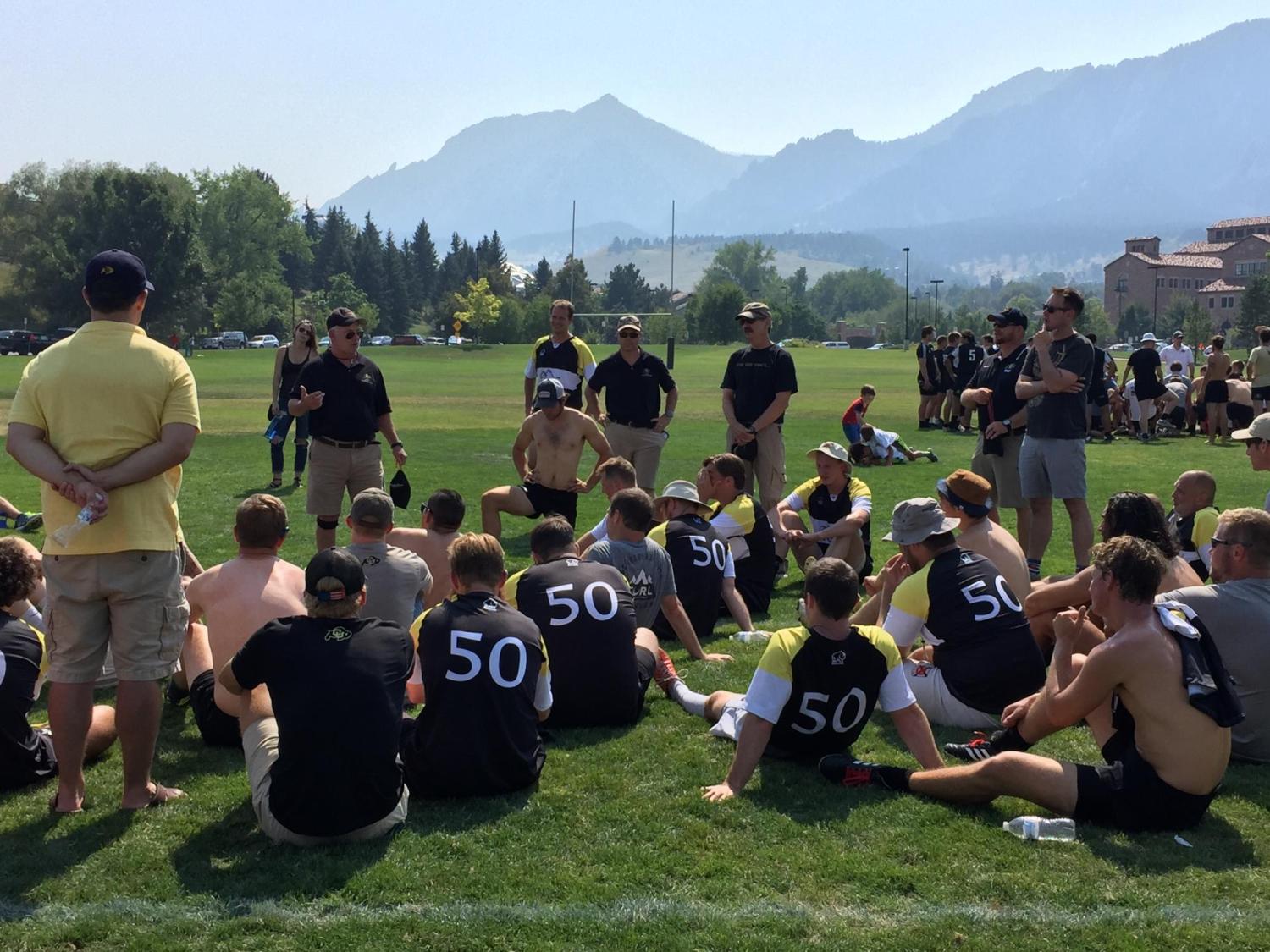 Over Labor Day weekend the club celebrated its 50th anniversary on campus. The highlight was a match pitting alumni against current CU players. About 40 alumni from all five decades participated.

David Bennet (DistSt’72), who first played for CU in the spring of 1969, played wing with finesse and showed the young’uns how to make a good pass. Pete Doody (Engl’81) showed that he can still hook. And Rich Frankenheimer (Econ’81) was a flash down the sidelines on several outside runs.

Dean Niro (CivEngr’88) played against his son, current CU flanker Zack Niro (EnvDes’19), and had a big smile on his face trotting away after taking down his son.

The ’90s were represented by Dan Hernandez (InfoSys’98) and Shane Brown (AeroEngr’95; MS’99), who showed that guys in their 40s can still out ruck 20-year olds. Dan Bludeau (Hist’01), Jeff Sorenson (MCDB, BioChem’01), Eric DeKruif (AeroEngr’03), Chad Slaby (Comm’03), Marc Maginn (Bus’04) played like they were still in their prime. The depth of the alumni team came from the most recent graduates.

Charlie Barkmeier (Econ’15) summed up the consensus of the newly minted alumni that this game really hurts when you’re no longer playing every day. Many additional alumni watched from the sidelines, and while everybody had fun, the alumni back on the field again playing the game they love had the most.

Planning has begun for a 2018 alumni event, again scheduled for Labor Day weekend, when the Club will celebrate the 10th anniversary of their 2008 Big Four run (collegiate rugby’s version of the Final Four).

The CU Men’s Rugby Club, coached by Murray Ian Wallace, competes in the Rocky Mountain Conference of D1-A rugby, the highest level of collegiate rugby in the U.S.

For more information about the upcoming 2018 event, check out the club’s website or email info@curugbylegacy.org. 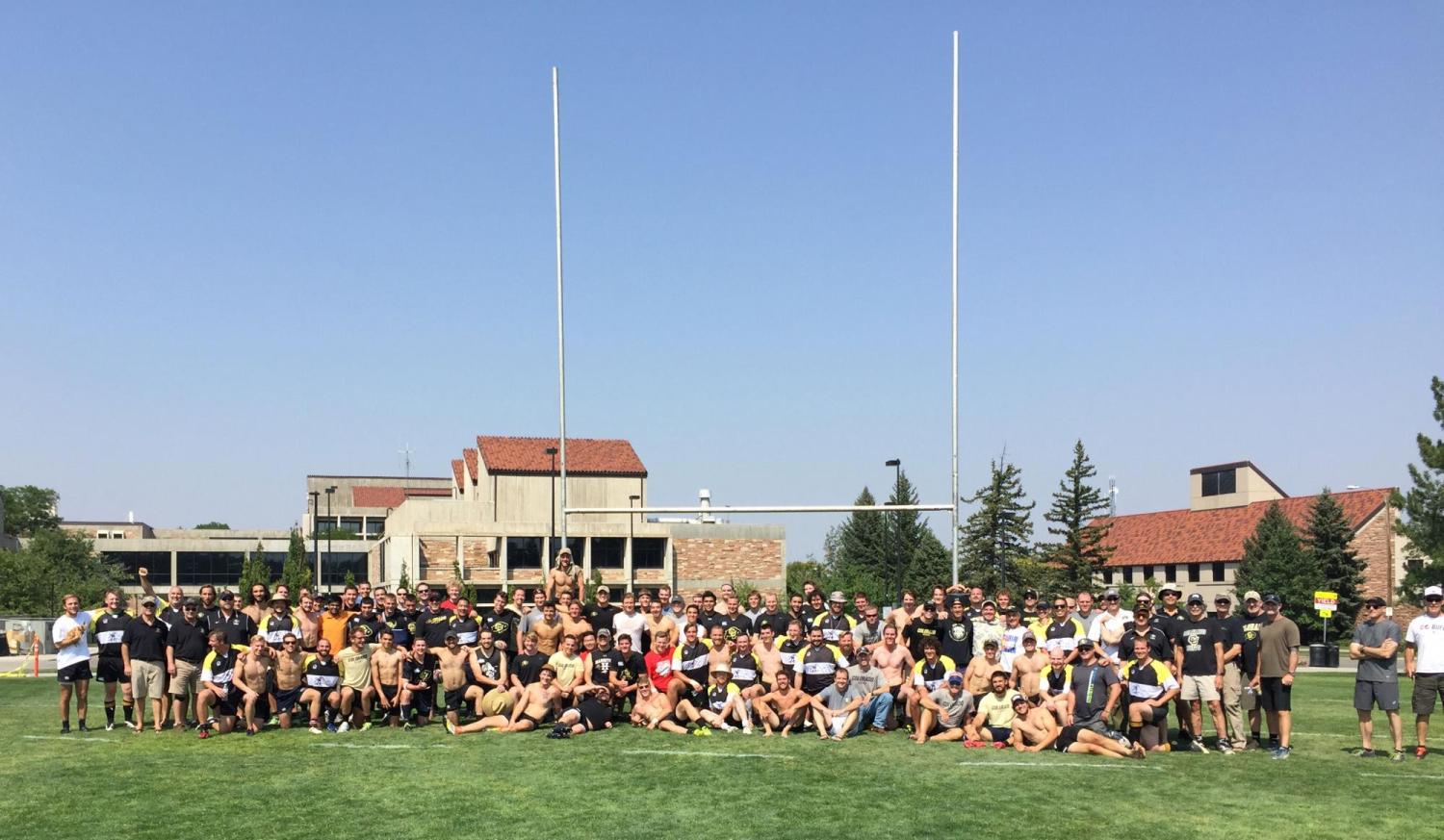 The 2017 alumni rugby crew at their Labor Day weekend reunion.