CU-Boulder to hold one full-campus graduation ceremony in May

Kegan Zorens (Econ’15) and Hong Zhao (PhDAeroEngr’15) were, alphabetically speaking, among the very last students to graduate at CU-Boulder’s winter commencement on Dec. 19.

This gave them a further distinction: It made them two of the last students ever to graduate in winter. After 50 years of winter commencements, CU has discontinued the tradition in favor of one annual all-campus ceremony in May.

The decision to switch to a single ceremony was made in 2014, after students were granted a reading day between the end of fall semester classes and the first day of finals. That extra day for study effectively pushed commencement to a mid-December Saturday, uncomfortably close most years to the busiest holiday travel days, says Sarah Adderholt, executive director of events and outreach in the Chancellor’s office, who helps coordinate commencement.

Schools, colleges and departments may still host their own recognition ceremonies for graduates at the end of the fall, Adderholt says, and all students finishing then may attend the May ceremony, which has always been the largest annual commencement.

CU-Boulder held its first winter commencement of the semester-era on Jan. 31, 1966. (Ceremonies were once held in March, when a quarter system was in place.)

At the final winter ceremony in Coors Events Center, 1,736 students took degrees. Historian Fred Anderson — recipient of the 2015 Hazel Barnes Award, CU’s premier faculty award — delivered the address, a reflection on Robert Frost, the act of creation and the value of work.

“It’s not just poems that begin with a lump in the throat,” Anderson said, referring to Frost’s description of poems’ birth. “All the important transitions in life do.” 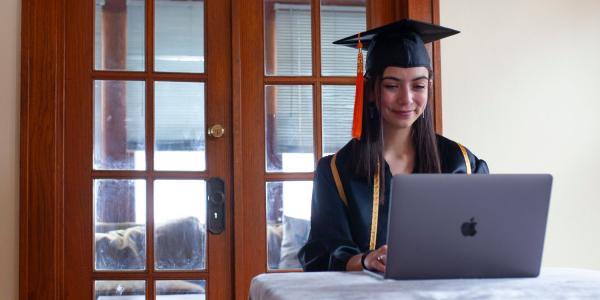 At commencement 2017, Friday, May 12, the university conferred nearly 6,300 degrees on more than 4,600 undergraduates and 1,600 graduate and professional students. END_OF_DOCUMENT_TOKEN_TO_BE_REPLACED