CMCI Buffs bring the Tokyo Olympics to fans around the world

Sharing Stories of the Summer Games

After a year-long delay, the Tokyo Summer Olympic Games captured the world's attention in 2021

As this year’s events unfolded, sports reporters and storytellers––including alumni, students and faculty from CMCI––hit the ground running to capture the victories, struggles and emotions of athletes from around the globe.

The experience has likely been both familiar and thrilling for Olympic veterans such as USA Volleyball Communications Manager B.J. Hoeptner Evans (Jour’90), who marked Tokyo as her sixth Games. Another longtime pro, AP photographer Gregory Bull (Jour’91), captured an iconic photo of Gabby Douglas’ gold medal-winning beam performance during the London Olympics in 2012 and returned to cover gymnastics and swimming in 2021. Pulitzer Prize-winning New York Times journalist John Branch (Bus’89; MJour’96) also headed to Tokyo this year with a focus on newer events such as skateboarding, rock climbing and surfing.

For more recent graduates, like NBC Sports Event Management Assistant Lina Takahashi (Jour’19), the 2021 Olympics represented a personal and professional milestone. Attending the Tokyo Games, specifically, has been a longtime dream for Takahashi, whose father works with Japanese Olympic runners.

“I think my love for the Olympics was partly because of my dad,” she told CMCI in 2019, “but I also think that I was just amazed at how the world comes together every two years to compete, watch and celebrate their nation’s players.”

Paralympian, veteran and author Melissa Stockwell (Comm’02)––whose memoir, The Power of Choice: My Journey from Wounded Warrior to World Champion, was published in 2020––is competing as a triathlete after two previous Games. The first woman to lose a limb in the Iraq War, Stockwell has previously won three paratriathlon world championships and a bronze medal at the 2016 Rio Paralympics.

“Even with some of my fastest times, I was not confident that I was going to be named to the team as I needed an international invite slot, the same I had received in 2016 prior to Rio,” Stockwell wrote on Instagram, adding, “I think I am still in shock."

Some Olympic events this year brought current and former CMCI Buffs together. Television producer Peter Lasser (Comm’76)—who has covered 10 previous Games—recently captured the Olympic swimming trials in Omaha, Nebraska, alongside CMCI sophomore Abbie Snyder, who was there as a production runner for NBC.

"What a difference a year could make," Lasser says. "The athletes already compete for an opportunity that occurs in a very small window of time. Training for years, so that on a singular day you will perform at your best and hope to win a gold medal or any medal, or just make finals to compete for a medal. There were probably a dozen U.S. swimmers that would have made the team in the summer of 2020 but were surpassed in trials a year later by others who were reaching their peak. To quote the old ABC Wide World of Sports opening, it is the epitome of 'the thrill of victory and the agony of defeat'. 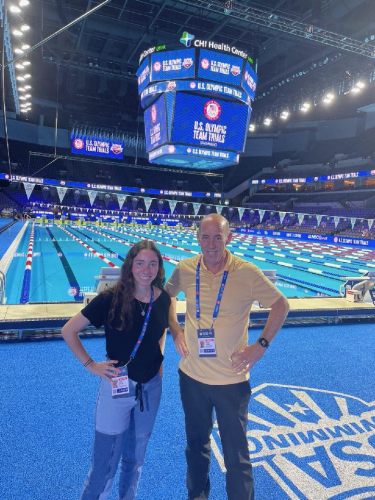 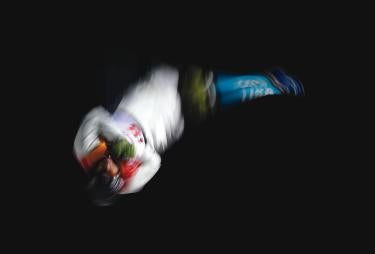 AP photographer Gregory Bull (Jour’91) has covered multiple Olympic Games––including the 2018 Winter Games when he photographed Australian aerial/freestyle skier David Morris. He returned to the Games in 2021 to photograph gymnastics and swimming in Tokyo. 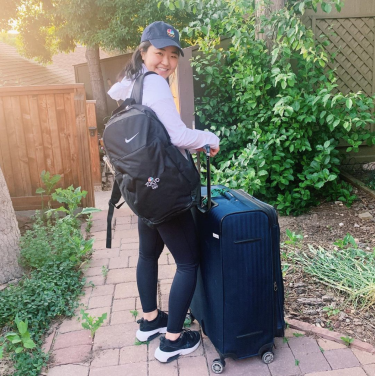 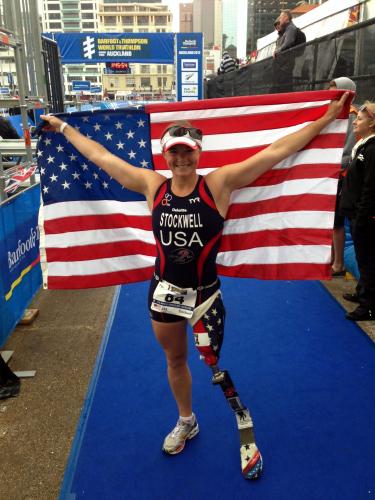 Paralympian, veteran and author Melissa Stockwell (Comm’02) is competing as a triathlete after two previous Games. 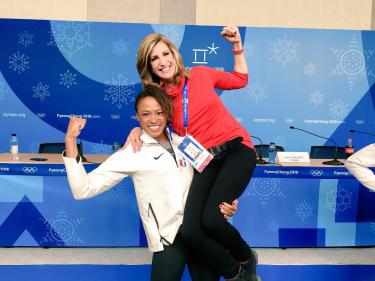 Veteran reporter and news anchor Cheryl Preheim (Comm'95) covered her fifth Olympics as an anchor for NBC affiliate 11Alive. Preheim is pictured with bobsledder Lauren Gibbs at the 2018 Winter Games. 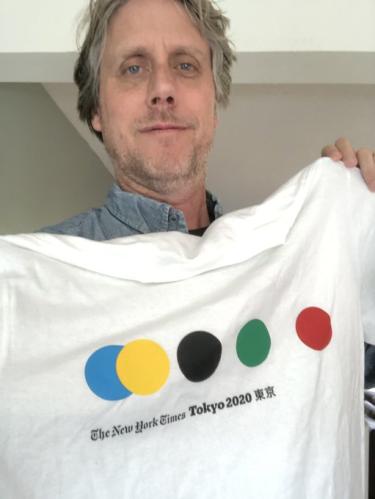 Pulitzer Prize-winning New York Times journalist John Branch (Bus’89; MJour’96) headed to Tokyo with a focus on newer events such as skateboarding, rock climbing and surfing. He recently took a critical look at the past, present and future of the Olympics in his piece, "Let the Games... Be Gone?"

While journalists and producers have traditionally covered Olympic events in person, much of the reporting on this year's Games was conducted virtually due to the pandemic.

Lasser, who once filled in for Turner Sports to produce a hockey game virtually during the 1994 Winter Olympics in Lillehammer, believes that remote production will continue for future Olympics, for both technological and financial reasons.

"There are two major factors – first, the quality of the production that the world feed provides. Olympic Broadcasting Services has continued to add to the technology of coverage at each Olympics," he says. "The second factor is cost. It cost NBC roughly $50,000 per person sent to Tokyo––that is for airfare, hotel and per diem. It doesn’t even cover pay. At those numbers, it just doesn’t make sense."

CMCI Instructor and Sports Media Minor Director Marina Dmukhovskaya is one of many journalists who reported on the Games virtually for the first time this year, and despite having two previous Olympics under her belt—Sochi in 2014 and Pyeongchang in 2018—the Tokyo games made her feel like a novice again.

“You get used to coming to a place, talking to athletes, talking to coaches and attending press conferences,” she says. “And then suddenly all you have is a computer, your notes, internet and your colleagues.”

This was also Dmukhovskaya’s first time writing for the Olympic Channel, the platform of the International Olympic Committee. Based in Berlin, Germany, she began her coverage at 8 a.m. CEST—3 p.m. in Tokyo, Japan JST—and didn't wrap up until at least 6 p.m. CEST. Though she wasn't reporting on site, Dmukhovskaya met virtually with editors and production teams based in Tokyo and Madrid, as well as fellow journalists scattered around the globe.

“I think this is becoming a new norm,” she says, adding that, while she would have preferred to report from Tokyo, she understands the rationale for limiting exposure to the athletes, as well as the increasing importance of reducing travel for environmental reasons.

For feature stories, Dmukhovskaya focused more on individual athletes than on specific events, she says, noting that for many athletes, the real battle is not with their competitors but with themselves.

When looking for potential leads, Dmukhovskaya says, she examines the relationship dynamics between athletes and seeks details that capture the personal and often emotional stories of their Olympic journeys. Recently, she produced stories on athletes' mental health, on a rock climber who was forced to train alone after the death of his longtime coach, and on two former canoe racing rivals from the same team who realized they work better together.

“The way that they went from competitors to people who are looking forward to getting the same medal—from being these individuals to becoming a team—it’s amazing,” she says.

Part of what makes the Games so special, Dmukhovskaya adds, is the way each event brings together an international and diverse group of individuals.

“[The] Olympics is, I feel like, the greatest event on Earth because it brings the talent and the stories and the representatives of the entire planet,” she says.

Lasser agreed, noting that the international broadcast center is often a hub for broadcasters from around the world.

"I have always thought that the most unique aspect of the Olympic Games was the international broadcast center," he says. "You can walk through the facility and literally see broadcasters from hundreds of countries all bringing the story of the Olympic Games to their homeland. Just sitting in the commissary, you see the faces of the world in one room and hear so many languages. While the variety is great – the purpose and focus is the same."

While the main events take place over the span of about two weeks, producers like Lasser and journalists like Dmukhovskaya spend far longer preparing. Dmukhovskaya's assignments required extra research this year, as she needed to familiarize herself with summer events after spending most of her career focused on the Winter Games.

“It’s kind of an unfamiliar situation to me because I’m not an expert in summer sports. And it’s funny because I’m always telling my students who take up sports writing with me, ‘Hey, it doesn’t matter if you’re an expert, you can always research,’” she says. “So I’m actually following my own advice and I’m like, ‘Oh, now it’s me who has to do that.’”

For her first Games at Sochi in 2014, Dmukhovskaya, who speaks five languages including Korean, worked as a translator for Viktor Ahn, a six-time Olympic short track speed skating champion who represented Russia and was born in South Korea. She eventually began writing stories on the Olympics and fell in love with capturing the experience.

“The atmosphere was just so amazing,” she says. “I just wanted to experience that feeling again—the euphoria of being at this big event. And look at me now. I’m at home covering the Olympics in Tokyo.”

This year, especially, journalists and producers were critical in keeping fans engaged while they weren't allowed to attend in-person events. As a storyteller and fan herself, Dmukhovskaya says it was a responsibility she was proud to take on.

“When you have so many people from so many different countries—I couldn't think of anything else that brings people from all over the world together, and this is [what is] so special about the Olympic Games,” she says. “For me, it’s a great honor to be able to tell the stories of these athletes.” 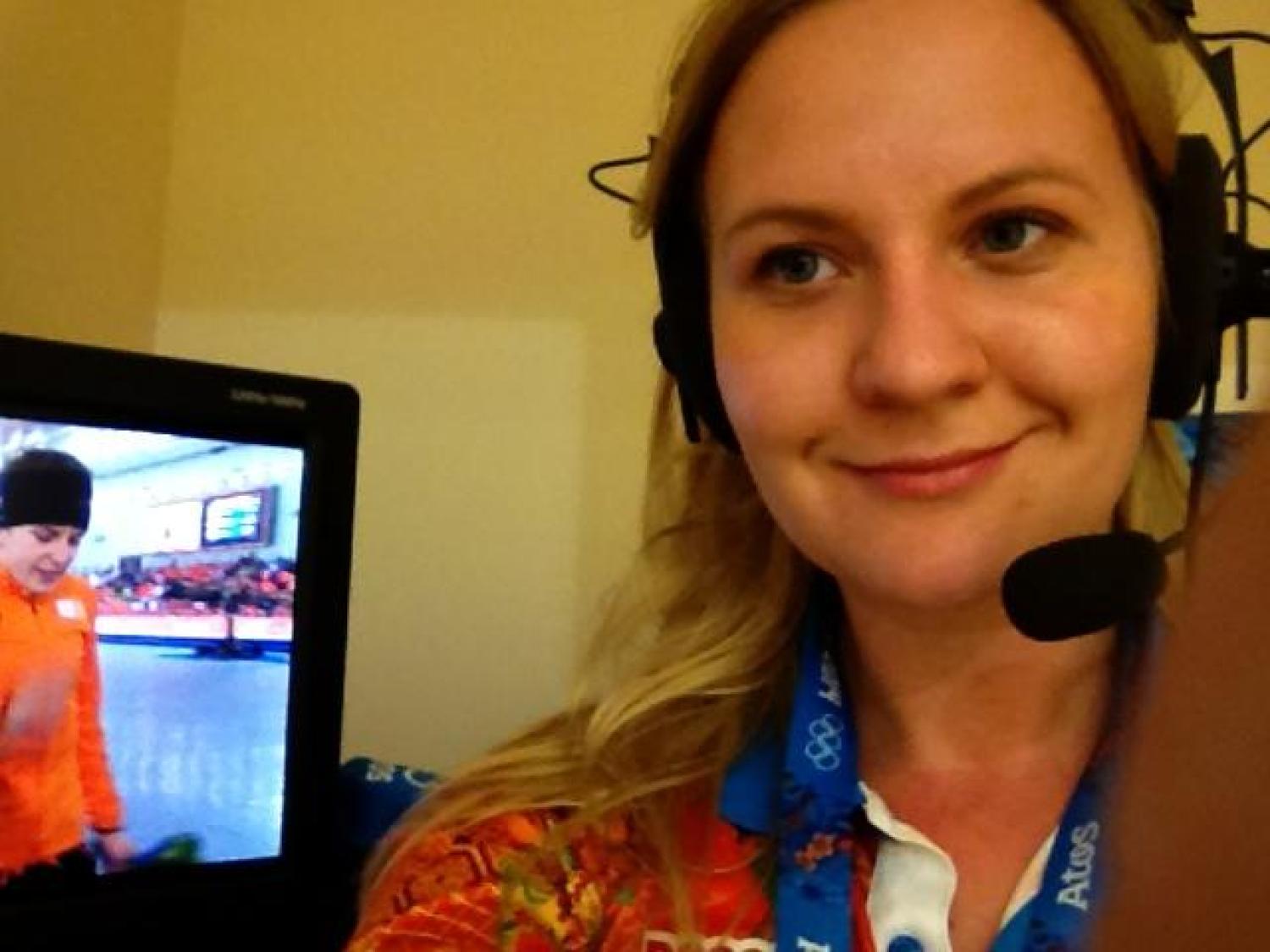 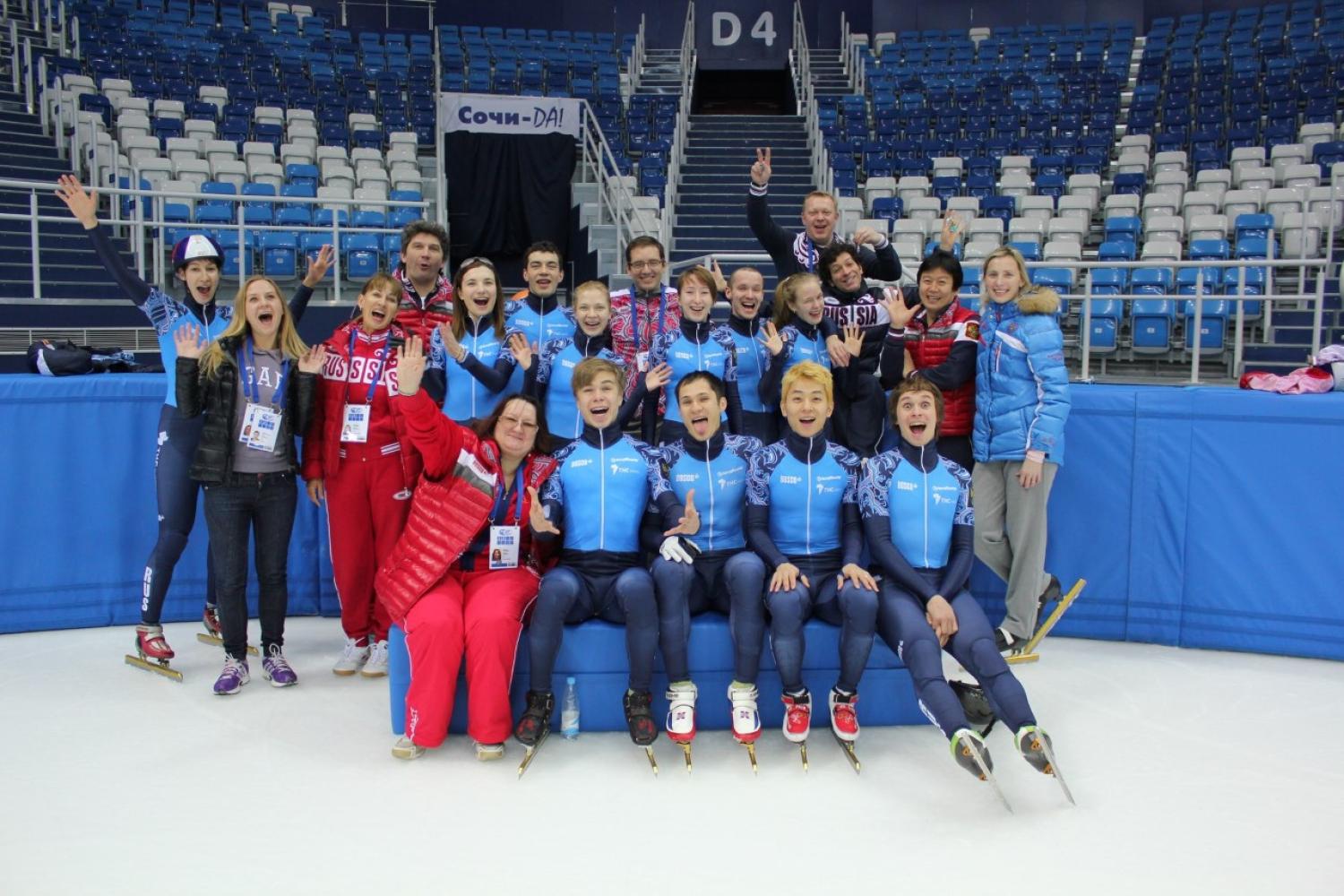 Dmukhovskaya started her career in sports as a media manager for the Russian Skating Union. 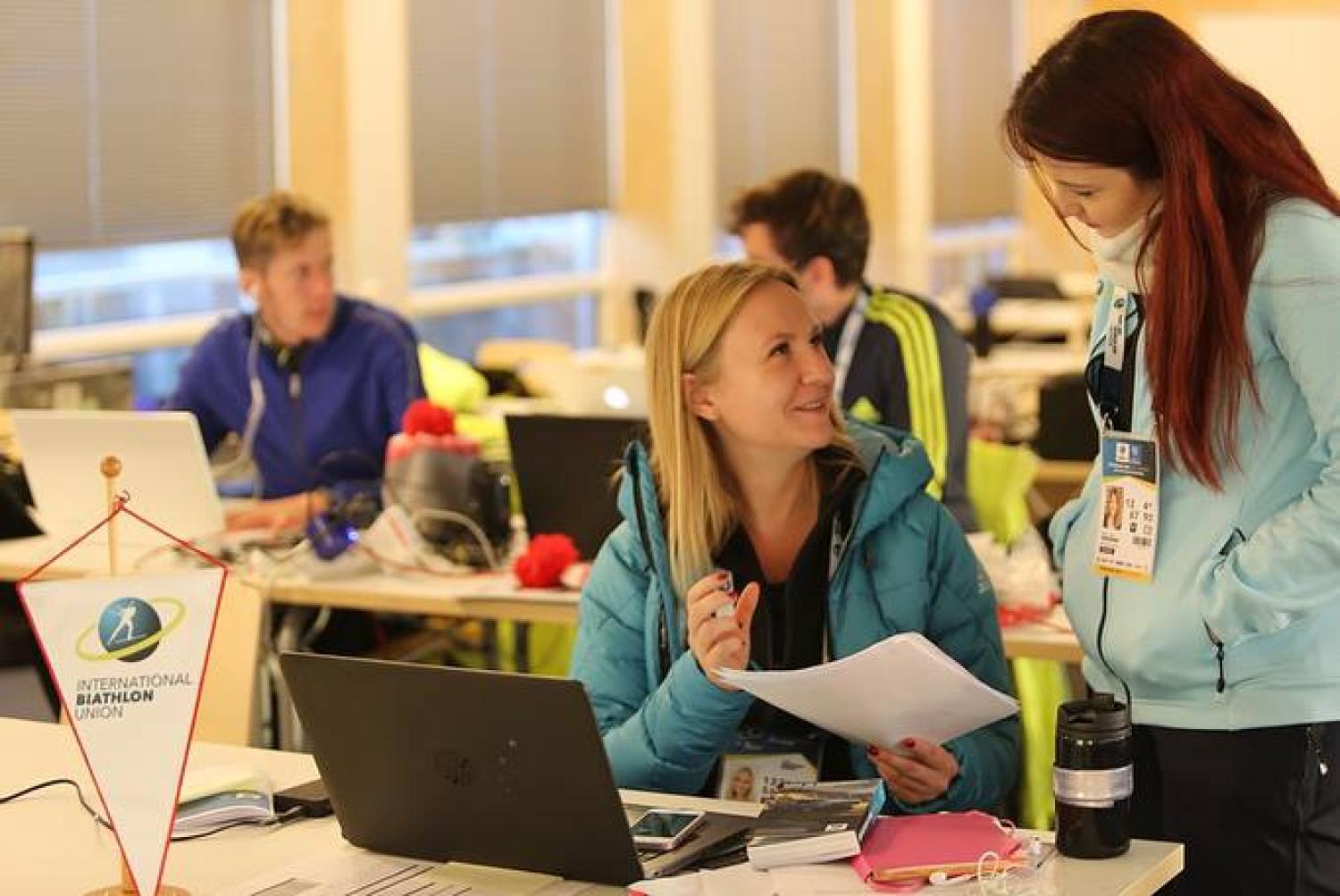 After working at the Sochi Olympics as an Olympic News Service reporter, Dmukhovskaya became a writer for the International Paralympics Committee. 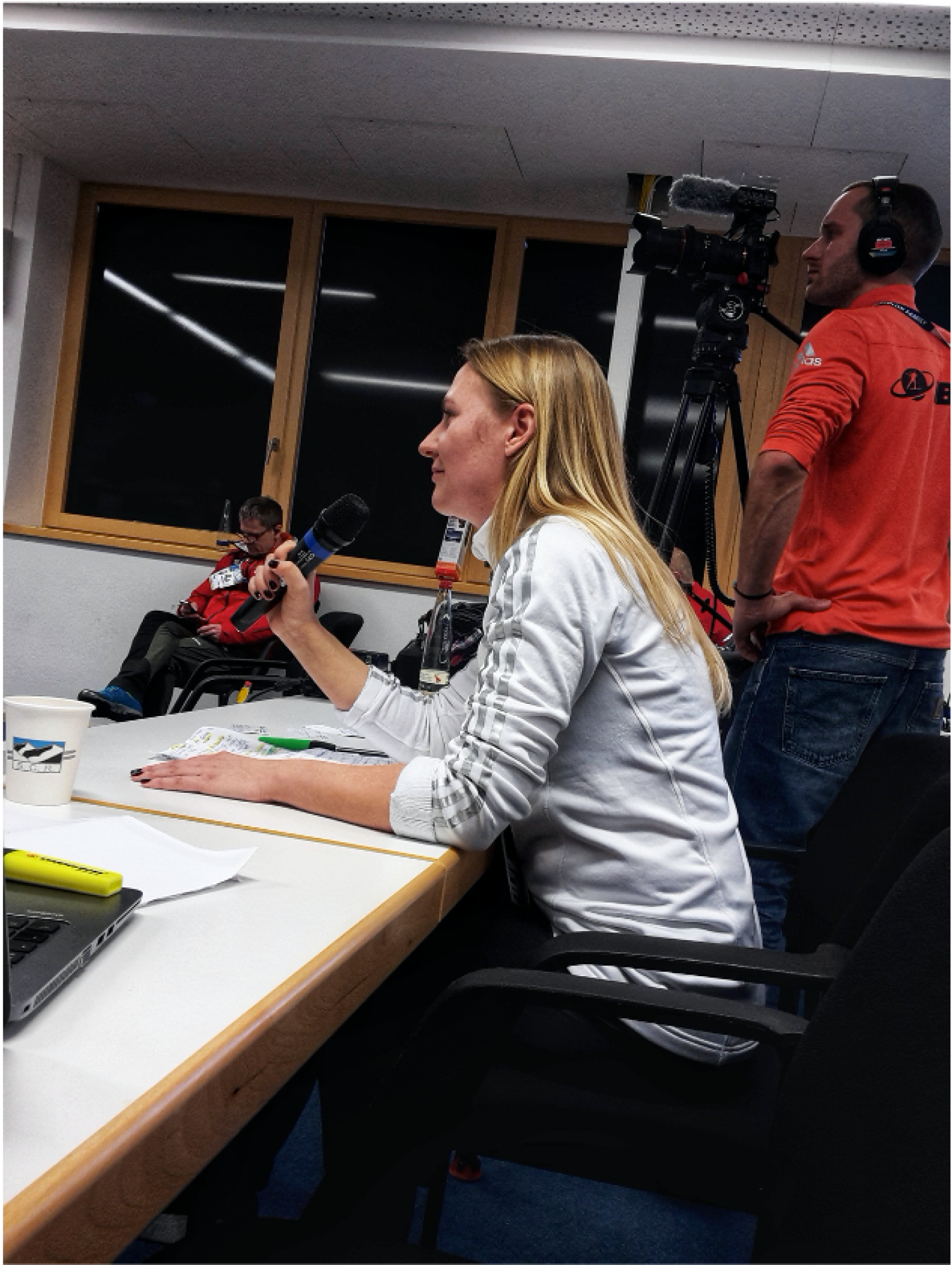 Before reporting on the Tokyo Olympics, Dmukhovskaya previously covered the Winter Games in Sochi in 2014 and in Pyeongchang in 2018.

Issue: Summer 2021
Categories:
Tags:
Return to the top of the page