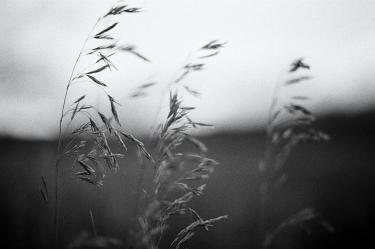 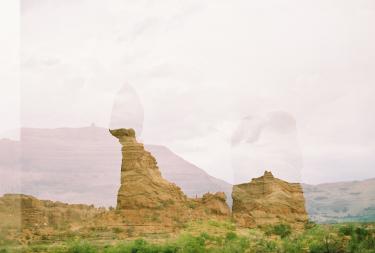 "In a broad sense, both photos depict the American West, which is the primary subject for both my writing and my photography. I'm captivated by the West - its issues, its people, and of course, its landscapes. In the case of "Ill Fame," I wanted to juxtapose an extremely famous landmark in Balancing Rock, with something more nondescript. The West is largely characterized by a few, select famous landscapes; there's so much wild land that's totally under-appreciated and practically forgotten. I figured contrasting Balancing Rock with an anonymous Moab hillside in a double exposure would be a good way to speak to that idea.

As for "Entering Ranchland," I think it's easily one of the better photographs I've ever taken, and in a lot of ways, I got lucky. I took the photo when I was first learning how to use my film camera. I was wandering around the grassland near my house, and the light got all low and weird thanks to an approaching thunderstorm. That afternoon, my mission had been getting my lens close to the earth, so I snapped a couple photos of the tall grass. I was pretty shocked to see that it turned out as well as it did. For the title, I wanted to capture some of the history of the land. The meadows and hills surrounding my house used to be small ranches and potato farms, but those days are mostly gone. We live across from a little ranch, but those types of operations are fading quickly. Not that the area has been commandeered into a traditional suburb, but the landscape is certainly changing. Development is encroaching further and further across the area. "Entering Ranchland" I suppose is a bit of a mix between the pastoral and nostalgic. But I'm just glad the photo turned out!