In the weeks leading up to the Beijing 2022 Paralympic Winter Games, Spencer Wood (StratComm’21) spent his days training on the ski slopes, traveling around the globe and meeting some of the best athletes in the world.

Wood never imagined he'd become a Paralympian as a sophomore at CU Boulder. Now, as a CMCI alumnus, he’s competing as an alpine skier for the second time in the Paralympic Winter Games, which take place March 4-13. He'll join about 730 athletes, including CU Boulder student Kyle Taulman, competing on the international stage across 78 medal events.

“I’m so excited,” Wood said. “It is the greatest honor to me to be in the position that I am.”

Growing up in Vermont, Wood began skiing at about 2 years old.

“I grew up at Killington Resort,” he said. “My parents met there, and my grandparents met there. It’s in the blood. I think it’s just something that I’ve always ever loved.”

Wood, who had a stroke before he was born, did not know he had a disability when he first started skiing.

“I have cerebral palsy. I didn’t know until I was in the fourth grade when my parents had to tell me,” he said. “I have limited motor function on my right foot—I can’t move it side to side—and there are some spasticity issues there as well.”

It took some time for Wood to accept having a disability, he said, but now he knows it does not define who he is.

“I’m disabled, but I don’t need to live inside the barriers that people think it needs to be,” he said. “I’m still the same guy, but now I get to do this amazing life path that I never expected would happen.” 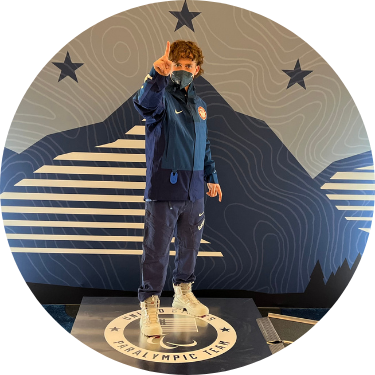 Wood never imagined he would become a Paralympian, he said, but this year marks his second time competing in the Paralympics. Photo provided by Wood.

The first time Wood proudly shared that he is an athlete with a disability was in an Instagram post in 2014 after attending the Hartford Ski Spectacular, which introduces snow sports to anyone with a disability, he said.

“That was a major turning point. That was a really big point in my ski career and my emotional state,” Wood said.

Wood didn’t plan to become a Paralympian. In fact, he had considered ending his competitive skiing career during his freshman year at CU Boulder. But after his coach asked if he’d compete in one more race to see if he could qualify for the 2018 Paralympics, he thought, “Fine, one race.”

Then, at the end of his freshman year, the unexpected happened—he received a letter inviting him to compete in the 2018 Winter Paralympics in PyeongChang, South Korea.

“Going to your first Games is overwhelming. There’s a lot of emotion, anxiety and stress you put on yourself because it’s the big show—it’s the one that every kid has ever wanted to go to,” he said.

Wood competed in two alpine skiing races, but the results were not what he hoped for: He placed 25th in the giant slalom and fell three gates from the bottom in the second round in the slalom, he said.

He had taken off the second semester of his sophomore year to compete, he explained. When he came back to school he felt more committed to putting forth his best, both on the slopes and in the classroom.

When Wood started college in 2016 he was unsure of what major to choose, but that changed after he took an introductory course in the Department of Advertising, Public Relations and Media Design (APRD). He learned a great deal from his professors, he said, because many are still working in the strategic communication field.

During his sophomore year, both of his Introduction to Branding Strategy instructors worked for Crispin Porter + Bogusky (CPB).

“They were the coolest people,” Wood said. “We got to present in CPB and that was so exciting. And I just remember thinking, ‘Wow, this is totally something I want to do.’”

One of the most formative classes was his capstone course, which matches students to real-world clients. Wood’s group developed an action campaign to help the Children’s Treehouse Foundation, a nonprofit that trains people how to emotionally support children of cancer patients, roll out its program in more hospitals.

“I remember thinking, ‘I need to save these notes on how we did everything.’ Because this is definitely one of those classes that I’m going to refer to when I try to do something in the work world,” Wood said. 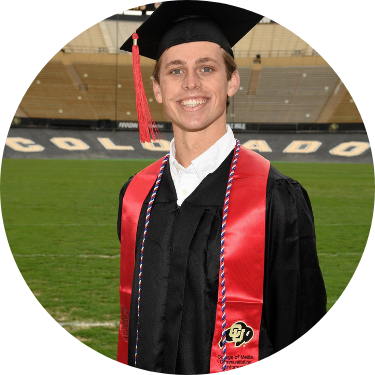 Spencer Wood, who graduated in May 2021, always wanted to come to CU, he said. He even discovered during a campus tour that his great uncle is William Duane, the namesake of the Duane Physics building. Photo provided by Wood.

After the Paralympics, he said he hopes to pursue a creative position such as working at a small advertising agency. In the meantime, his main focus is the 2022 Games.

Gearing up for the Winter Paralympics

Wood has spent the last four years competing in a variety of international competitions, preparing for this year’s Paralympics. A career highlight, he said, was when he earned third place on his 22nd birthday in the Zagreb 2019 World Para Alpine Skiing World Cup.

Last summer, he stayed at the Olympic Training Center in Colorado Springs to prioritize his physical training, and compared to 2018, he feels more mentally prepared.

“Going into this season, I’ve felt just so calm, so relaxed, so focused,” he said, saying he has tunnel vision on his goals.

Wood will compete in all five Alpine Ski events this year: downhill, super G, giant slalom, slalom and super-combined. He does not want to compare himself to other competitors in the Paralympics, he explained, but rather to himself—his biggest competitor.

While Wood stayed at a training camp in Sun Valley, Idaho, 17 days before the start of the Paralympics, he paused and reflected on his skiing journey thus far. He expressed his eagerness to compete and the honor he felt to represent the U.S.

“I never thought I’d be here,” he said. “I'm really looking forward to trying to represent my country the best I can.”