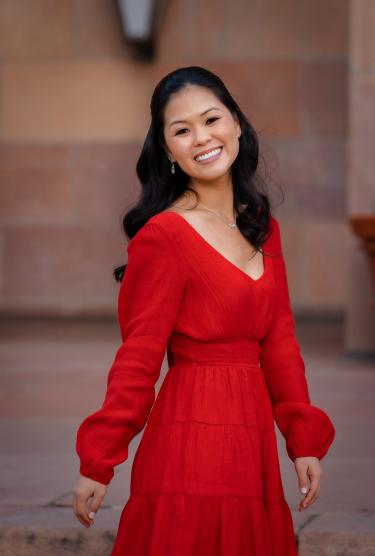 With a dual-degree in communication and sociology, December graduate Zoe Fleming is adept at analyzing and explaining why complex issues exist, in an effort to solve them. It’s not easy work, but Fleming’s dedication to learning has given her the necessary skills.

This December, Fleming’s hard work paid off. She earned the William W. White Outstanding Graduate Award, an honor bestowed to the student graduating with the highest GPA in the College of Media, Communication and Information. Although she’s graduating with high honors, Fleming said achieving a certain GPA was never her goal.

“I have just always been told, from my parents, to always do my best,” Fleming said. “I would say that’s the best piece of advice because it doesn’t put the pressure on meeting a specific bar. It’s just your own bar.”

It’s one piece of advice she shares with first-year students through a College of Arts and Sciences mentorship program. The other is to visit professors during their office hours.

“One thing that helps me thrive as a student is when you have that personal interaction with the teacher,” Fleming said.

Originally a sociology major, studying communication wasn’t part of Fleming’s initial plans. But during her second semester at CU, she took a communication course about group interactions that motivated her to add communication as a minor.

She went on to join a Communication, Technology and Society course taught by Associate Professor Ted Striphas, and a Race, Hip-Hop and Communications senior seminar taught by Assistant Professor Danielle Hodge. The professors helped her discover more about her professional interests, the communication field and herself.

“They were invested not only in the material but the students in their courses,” Fleming explained. “Both of the classes really allowed me to see how you can actually apply what I’ve been learning for the past three and a half years to everyday phenomenon.”

Her interest in communication continued to grow, and by fall 2019, she declared it as a second degree.

Fleming focused her studies on examining why people interact in certain ways, rather than how. She has learned to look past the surface level and instead analyze the underlying factors and complexities that influence people and society, such as people’s identities.

People have multiple identities, such as race, gender, socioeconomic status and religion, which give each person a unique social location in society. For example, although Fleming is a racial minority, she also has privilege due to her socioeconomic status, she said. These two different identities coexist and can impact the way she experiences the world—they intersect. 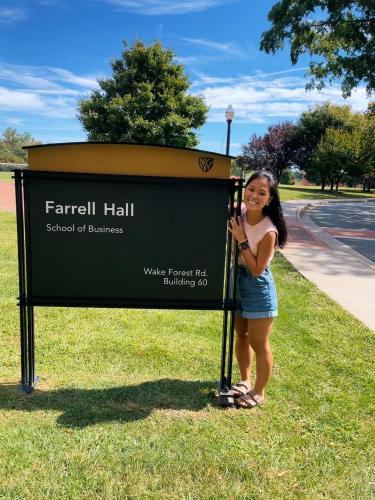 Applying this intersectional lens has been helpful during her internships with the nonprofit Save the Children U.S., where she worked as a human resources intern and an intern for the employee relations and child safeguarding team.

It’s because of her studies that she was able to offer a new lens to issues they were addressing, like communication differences, Fleming said. For example, she noticed women managers were more likely than men to come across apologetic in emails, such as saying, “Sorry about that.”

Although some misinterpret this as a lack of strength in leadership, through her studies, Fleming understood and could explain that women are more likely to apologize because they’ve been socialized to avoid appearing overly aggressive.

In addition to helping resolve organizational issues, learning about intersectionality has also helped her grow as an individual.

“You’re able to see the full picture and what different forces are interacting and causing specific things to happen, which has helped me be more open and empathetic, because I’m not just judging based off the outside,” she said.

Moving forward, she hopes to share similar lessons with other businesses.

“I find business very interesting, but I want to make it more people-based,” Fleming said, adding that she wants to help businesses apply a more empathetic lens in their operations rather than prioritizing data and numbers.

To accomplish this, Fleming plans to attend Wake Forest University in North Carolina in summer 2022 to pursue a master’s degree in management, where she’ll continue to ask questions, apply theories and explore the complexities that make up our world.

“I’m naturally a curious person, trying to understand the why,” Fleming said. “I really like how sociology and communications have given me that groundwork—that holistic kind of approach to everything.”