In the public relations world, the Bateman Case Study Competition is legendary.

Renowned since its inception in the 70s, the year-long project tests students’ abilities to plan, produce and execute a full-scale public relations campaign.

This academic year marks CU Boulder’s first foray into the competition––an accomplishment that happens to coincide with the program being named an A-list school by PR News. CU’s contenders are competing against 370 PRSSA affiliated chapters, all respected public relations departments across the country.

“Yes, we want to win,” says Dawn Doty, faculty advisor for CU Boulder’s chapter of PRSSA. “But frankly, competing in it is equally as important. It shows that our PR curriculum and faculty are now robust enough to even consider entering the competition.”

Last year, students had the opportunity to apply for a two-semester course, which focuses on preparation for and participation in the competition. After primarily focusing on research during the fall semester, students are now embarking on their campaigns. The top three contenders will give virtual presentations to a panel of professional PR practitioners in May.

In response to a noticeable decline in American civility over recent years, this year’s judges prompted students to focus on preserving civility in American life and fostering inclusive discourse.

Fourteen CU Boulder participants formed three groups, each with separate concepts for improving civility. They are currently in the implementation section of the competition––a unique challenge for Bateman contestants during the COVID-19 pandemic.

The first group, Buffs For Civility, is using the slogan, “Hear Someone Out” to call upon people to engage in civil conversations and listen with empathy. The next group, Civilly CU, is centered on the concept, “Learn one. Do one. Teach one.” Their campaign goal is to create a trustworthy environment to facilitate education, action and direction involving civil public discourse. The third group, The Bateman Buffs, created the campaign “Break the Spiral”––inspired by the theory of The Spiral of Silence, which holds that people’s unconscious perceptions can lead to an unwillingness to share opinions.

“I feel honored, honestly. I think it's really cool that we have this opportunity to show the nation that we can make good campaigns,” says Lauren Garrow, a member of the Civilly CU team. “We’re definitely looking to get a lot of people to sign our pledge and think critically about their own self discourse.”

The three groups are carrying out their campaigns through a range of tactics, which include developing websites, engaging through social media platforms, recruiting pledges and building informational tool kits. They also have access to a budget of $300 from the Department of Advertising, Public Relations and Media Design. They can raise up to $1,000 in additional funding from outside donors. Garrow’s group, however, will take a unique approach.

“We’re trying to make this a completely budget-free campaign,” she says, “Although we are so grateful that we have been able to have the support, we wanted to challenge ourselves and say we weren’t going to use a budget at all.”

The team hopes to demonstrate that, ultimately, it's priceless to engage in civil discourse, she says.

Helena Regan, a member of the Buffs For Civility group says communication, organization and work ethic are an integral part of competing in this national competition.

“Thanks to this competition, we also have developed skills such as networking and knowing the ins and outs of how a campaign is produced and managed,” said Skyler Boterenbrood, a member of The Bateman Buffs team.

For their final step, each team creates a final report––a culmination of the research and work they have completed over the past year.

“As we strive at CU to shape tomorrow’s leaders, I hope we all see the civility movement that our students are igniting as worthy of our time and engagement,” Doty said. 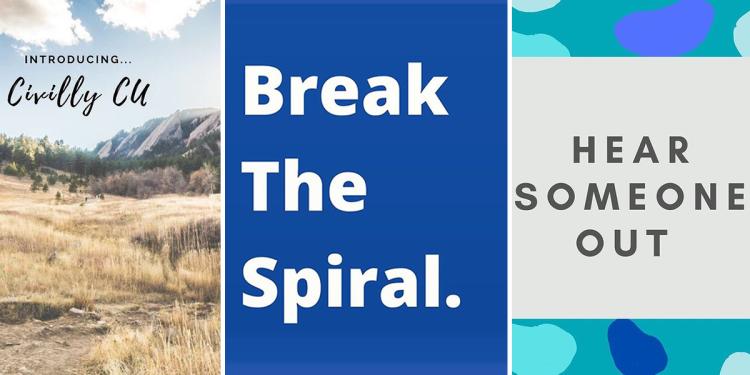