If you want to examine the carbon footprint of the internet, you’ve got to look below the surface.

Deep beneath the glistening waters of the world’s oceans exists a network of fiber optic cables that connects nations, regions and continents to the global flow of the internet. It’s called the subsea cable network, and as of 2019, the New York Times reported that it spanned nearly 750,000 miles.

"Ultimately, it is both the skeletal infrastructure and circulatory system facilitating the movement of over 90% of digital commerce, culture and communication,” says Hunter Vaughan, Environmental Media Scholar-in-Residence in CMCI’s Department of Media Studies. “Understanding its carbon footprint and environmental impacts will make huge strides towards a broader understanding of the environmental intensity of the internet as a whole. 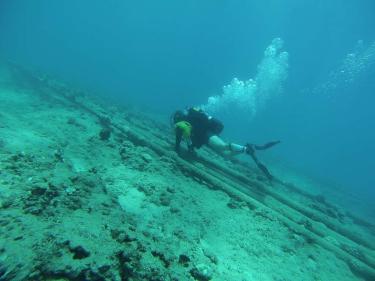 Vaughan, who studies and writes about the relationship between media, ethics, social power and the environment, recently joined an international team of researchers for a new project called Decarbonizing the Subsea Cable Network, an initiative of SubOptic––the international association of the subsea cable industry.

Funded by a two-year, $200,000 grant from the Internet Society Foundation, it is a pioneering attempt to track carbon emissions at an industry-wide scale––an effort that will span all six continents the subsea cables connect.

Ultimately, Vaughan hopes the team’s work will provide a broader understanding of the carbon and environmental intensity of the Internet––with particular mind to its subsea infrastructure. He also hopes it will allow researchers and industry practitioners to develop a more constructive and symbiotic relationship. In fact, two participants, GlobeNet and NJFX (New Jersey Fiber Exchange), are already confirmed.

"Corporate responsibility is going to be a central concern across industries in the coming decades, with carbon transparency and de-intensification being specific and easily articulated actions and missions through which companies can demonstrate this accountability,” Vaughan says.

As part of the project, the team will produce a series of reports that outline the extent of the internet’s carbon footprint while offering practical suggestions for the industry to mitigate its contributions to climate change. They also plan to offer “policy suggestions and initiatives that might utilize local, regional and global law and economic treaty as a way to help encourage and support this transition,” Vaughan says.

We caught up with Vaughan to discuss his new subsea venture and learn how it connects to his broader research on the environmental impacts of digital media culture.

Most studies on the internet’s climate impacts are on data centers. Why hasn’t more research already been done on the subsea cable network?

One reason is that, due to their location and big tech’s sleight of hand magic trick to convince us all that digital culture is immaterial, most people don’t even know they exist. The project lead, Nicole Starosielski (NYU), came out with an excellent and groundbreaking book (The Undersea Network, 2015) drawing attention to its history, architecture and impacts on social groups and the environment, but for the most part it has not been covered even by popular science and tech outlets like Wired, which have run various stories on the carbon footprint of Netflix binging, etc.

In what ways is the subsea cable network problematic, environmentally?

The environmental impacts include resource mining and manufacturing outputs of making new cables; heavy fossil fuel and marine ecosystem interruption used in the laying of new cables and repair and maintenance of old ones; resource use, construction pollution and interruption, and high energy dependency for cable landing sites and data centers that are the local nodes for the network; and impacts of standard corporate operations, such as air travel and office operations.

This is exactly why we are doing this project - to survey and bring to light any existing environmental practices for the rest of the industry to follow suit, and to develop green alternatives where they do not yet exist. We are fortunate to have the active participation of companies who are already thinking ahead regarding future infrastructures and climate change, and who are eager to promote and work towards more sustainable practices.

What is your particular role in this project?

My role is very much focused on broader research and industry communication and interaction (interviews, etc.), as well as running lead on our case study on South Florida/Miami and Latin America. Having spent much time in the Miami area, I have strong connections to the community and a strong understanding of the relationship between cultural values, identity diversity and industry attraction that makes Miami such an important data hub linking Latin America to the U.S. and to the rest of the world.

Between the Everglades and the barrier coral reef, Miami contains one of the most concentrated intersections of marine ecosystems and biodiversity and is a touchpoint and canary in the mine for the threats of sea level rise around the world. This makes it a crucial case study for this larger research project, and I will be directing it.

Thinking of your other research focused on the environmental impact of filmmaking in Hollywood, are there any parallels?

A central connection is simply the environmental impacts of digital media culture, which ranges from Hollywood filmmaking practices (see Avatar) to the increasing ubiquity of connected devices and practices now central to almost every aspect of daily life in many countries.

Moreover, this larger digital tech industry (and one might say global digital culture that has grown around it) is itself built upon exploitative labor practices and irresponsible resource mining techniques that are the bedrocks of in the era of global capitalism, fostering a digital divide in which certain nations and individuals profit and benefit at the expense of others.

Digital industry and culture heavily contribute to climate change and other environmental disruptions, which stand not only to destabilize ecosystems and accelerate species extinctions but cause human suffering that is disproportionately felt by poorer communities and communities of color in the U.S. and around the world (though their anthropogenic causes are largely the product of white wealthy industrialized systems). Climate change is not only a scientific problem but one that is intractably connected to deeply embedded structures of environmental racism and injustice.