Why can’t I tell my parents I love them?

Why is it that every time I get into a conflict with someone, it ends the relationship?

If I really show this side of myself, would people think I’m a weak person?

These are some of the interpersonal issues that Professor Larry Frey’s students have brought up over the years in his Communication and Human Relations senior seminar.

“It’s not easy and it takes a while,” says Frey of creating a classroom culture in which students can address their issues directly. “However, through the process, students engage in the work and grow.” 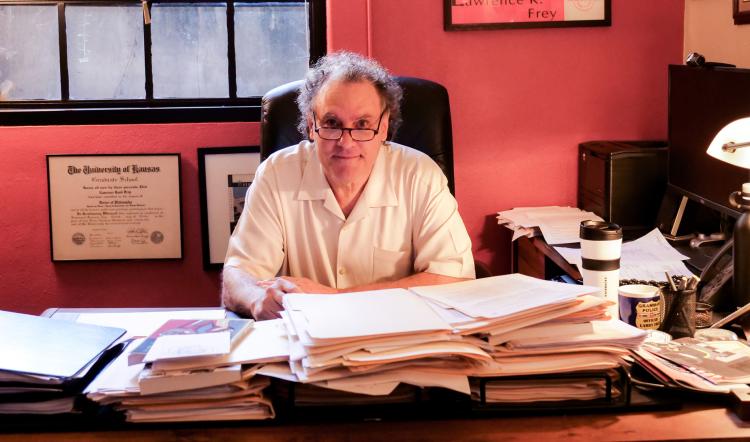 A professor in CMCI’s Department of Communication for nearly two decades, promoting meaningful interaction and change is at the heart of Frey’s teaching and research.   Throughout his career, he’s authored or edited 17 books and more than 100 other publications––many of them advocating for how communication scholars’ practices can contribute to social change.

This week, the National Communication Association (NCA) will honor him with the Distinguished Scholar Award, which recognizes NCA members for a lifetime of scholarly achievement in the study of human communication. Frey will accept his award on Nov. 16 at the NCA’s 105th Annual Convention in Baltimore. Since 1991, only 104 scholars have received the accolade.

Frey’s work in the classroom is an extension of decades of research and activism.

Working through difficult communication issues isn’t just a way to help students in their personal lives and relationships, he says. From a scholarly standpoint, the students are engaging in “pre-activism,” the first step in communication activism––a field he helped to pioneer.

Traditionally, communication scholars have observed the world and its problems as spectators––publishing their findings and hoping that others will use them to take action, Frey says. In contrast, communication activism scholars take a more hands-on approach. They work collaboratively with oppressed communities and activist groups to intervene and promote social justice.

“Most scholars think that they will conduct research and maybe somebody will do something with it,” Frey says. “My read is that there’s little evidence that people do that.”

The seeds of Frey’s work began at an early age.

As an American growing up in London during the height of the Vietnam War, Frey was often bullied.

“I got beat up virtually every day during sixth grade,” he says. “Kids would say, ‘What are you doing in Vietnam?’”

Years later, when he returned to the United States, with long hair and more socially liberal attitudes than his high school classmates, he found himself a stranger at home, too.

“I thought it was odd that people used these arbitrary things to exclude others,” he says. “All of those experiences made me very interested in social interaction and gave me a small taste of how exclusion feels.”

They also set in motion what would become his life's work: The study of how marginalized and under-resourced groups can use communication to affect change, and how communication scholars can aid those groups.

While at Bonaventure House, Frey met a resident named Manny.

Late one night––in the dead of winter––Manny called Frey, asking him to come to the house.

“I could tell that he was incredibly sick,” Frey recalls. “When I got to his room, Manny said, ‘I just want to contribute to your research project one more time.’”

Frey and Manny talked––not about research, just about life. Later in the evening, Manny fell asleep and went into a comma. He died the next morning.

That experience, Frey says, made him realize something important about research: “Maybe in those moments, it’s best to put your research aside, and just be with somebody as a human being.”

He’s carried that same spirit from the field to the classroom.

In Frey’s Communication and Human Relations course, he asks students to sit in a circle; no phones, notebooks, laptops, or other distractions are allowed.

“I just say, ‘Let’s go.’ If we’re going to sit there in silence for two-and-a-half hours, that is what we will do,” Frey says.

As students become more comfortable with each other, they gradually begin to identify and work on their own communication limitations. For their final assignment, students facilitate a conversation with someone important to them.

Once, he recalls, a student shared that he was about to give up on having a relationship with his father. The student could feel that his father was keeping something from him, which was causing distance in their relationship. He thought that his father might be gay, but they’d never spoken about it.

For Frey’s final assignment, the student facilitated a conversation with his father who came out to his son.

“They became incredibly close after that interaction,” Frey says.

Ultimately, that’s what Frey’s work is about: using communication theory and research to help people achieve intimacy in their lives and promote social justice.

“Before you can become politically active,” he says. “You have to get your own act together.”