For senior Torrie Eberhard, graduation was nearly a decade in the making. 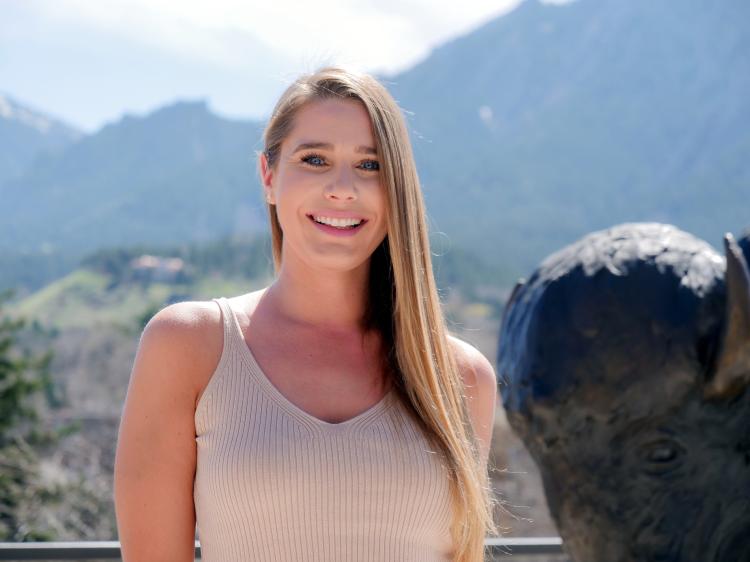 After spending six years at Front Range Community College and three years at CU Boulder, Eberhard, who is majoring in strategic communication with an emphasis on public relations and peace and conflict studies, is more than ready to claim her degree.

She’ll do so at the top of her class, as CMCI’s William W. White Outstanding Graduate, an honor given to the student with the highest GPA in the college.

“In my nine years of undergrad there have been countless obstacles and reasons to give up. I have taken semesters off and have restarted again and again,” Eberhard says. “Every time I consider throwing in the towel, but then I reflect on all of the obstacles, and how far I have come, and I just do it. I just turn in the paper or take the test, and now I am here.”

As a non-traditional student, Eberhard balanced her class schedule with a heavy workload. She also completed a PR internship with the Colorado Ballet, volunteered, and became a member of the Public Relations Student Society of America. The key, she says, was prioritization.

“For most of my college career, I have worked full-time,” she says. “Sometimes multiple jobs and over 40 hours a week. While it is absolutely possible to overextend yourself, we can mostly make time for the things we want to make time for.”

Another obstacle Eberhard faced—or expected to face—was the process of transferring schools. As she prepared to enroll at CU Boulder after several years at a community college, she worried about being older than other students and about not having connections established on campus.

Instead, during her first days and weeks on campus, she was pleasantly surprised to find a support system of friendly students, helpful and reassuring advisors, and dedicated professors, she says.

“The professors were the best,” she says. “They challenged the way I thought about myself and about the world. They supported me even though my circumstances were far different than my peers. And they believed in me, even when I didn’t believe in myself.”

One of the people who offered support along the way was Instructor Dawn Doty, who taught Eberhard in her Principles of PR and Strategic Writing for PR classes. Doty noticed that outside of class, Eberhard played an active role in supporting her family. She also noticed Eberhard’s work ethic, and her desire to do her best on every assignment.

“She pushes herself to get the very best grades and is disappointed when she doesn't reach her potential,” says Doty, who was recently named PRSA’s Mentor of the Year. “I remember one day Torrie came to visit me during office hours. She mentioned that she was disappointed with a grade for a writing project. I looked back to see what grade she achieved. It was an A-.”

Eberhard’s own assessment of herself is similar.

“I am a little neurotic and a major perfectionist—both to a fault,” she says. “I’m somewhere between a dreamer and a realist.”

Leading up to graduation, Eberhard has applied to a number of organizations. Her goal is to to find an entry-level position at an international strategy agency, but she’s open to whatever opportunities may come. Down the road, she hopes to finish and publish a book she’s started, to travel, and to find ways to build community and improve people’s ability to communicate with one another.

“Eventually, my intention is to create a space for the broader public to engage in a productive manner—a space that breaks partisan barriers and allows connection on a human level,” she says. “It’s a mixture of critical theory and communication strategy, an intersection in which I spend a lot of time.”

As she looks toward the next decade of her life, Eberhard knows challenges are sure to come. If her campus career has taught her anything, though, it's that she has the resiliency to overcome them and persevere.

“There was a time where I didn't even consider college, and more recent times when I thought I would never finish. This award is symbolic of all of the hard work and it is pretty special,” she says. “Wherever I end up, I know I will work hard, learn and excel.”