This week marks the 10-year anniversary of the largest bankruptcy in U.S. history, when the investment bank Lehman Brothers Holdings Inc. crashed on September 15, 2008. The sweeping financial crisis that followed sparked a national outcry for major economic reform.

Nathan Schneider—a journalist, author and assistant professor of media studies in the College of Media, Communication and Information—reported on protests surrounding the financial crisis in his 2012 book, Thank you, Anarchy: Notes from the Occupy Apocalypse, about the Occupy Wall Street movement. But the responses to the crisis included more than just protest.

He’s spent the past five years following former protesters and other activists exploring alternative economies. Many of them embraced a model that is at once revolutionary and historic: the cooperative movement. Schneider’s new book, Everything for Everyone: The Radical Tradition That Is Shaping the Next Economy, explores the history and future of this movement and its ties to local, national and international economies.

He sat down to discuss the book before embarking on a speaking tour that includes events in Colorado, New York and Washington, D.C.

What is a co-op and how does it work?
Cooperatives practice a kind of business in which those who participate are in charge. The business is accountable to those who use it. This is different from the investor-owned model, which is generally what we think about when we think of corporate America. But investor-ownership is only part of the story of how our economy works.

How can co-ops revolutionize America’s economic future?
I think it begins by recognizing that they’ve already revolutionized our economic past. Much of Colorado, for instance, never got electricity until electric cooperatives moved in because the investor-owners just weren’t interested in bringing electricity to the countryside. In media, Associated Press is a vital utility of the American media landscape. It’s probably the only media platform that reaches more people than Facebook on a daily basis, and this is a cooperative. It’s owned by small businesses and large businesses that use it, ranging from the Boulder Daily Camera to The New York Times. And then you have companies like Visa. The credit card business really didn’t get started until the cooperative model was introduced to it in the late 60s and early 70s.

So how can this change our future? Well, right now we’re in a moment where many of the largest companies in our society are facing major accountability problems. Facebook, Amazon, Google—these are companies that are between a rock and a hard place. They’re accountable to their investors but they’re providing such essential services to so many people that they may have become public utilities. I think that this cooperative tradition, which has been so important in the past, can be even more important in the future through the emerging digital economy.

Why did people from the Occupy Wall Street movement gravitated toward cooperatives?
Early on, it was just that this was the way of doing business that fit with the values that the Occupy movement built for itself—values around practicing democracy in everyday life. So it was just a natural fit. But actually, this is only the latest part of a long tradition. Social movements in the United States have often been integrally connected with the cooperative movement, from the early labor movement to civil-rights activists to Black Lives Matter.

Why did you decide to write a book about this?
I’ve been working on developing what we refer to as platform cooperativism, which is an international network bringing co-ops into the online platform economy. Through that work, I’ve gotten to know so many people who are courageous entrepreneurs. They are activists, thinkers and doers who tell a different kind of story about what entrepreneurship and business can look like and about what social activism can look like. I hope the book helps more people see what people like this are doing.

This interview has been lightly edited for clarity and length. 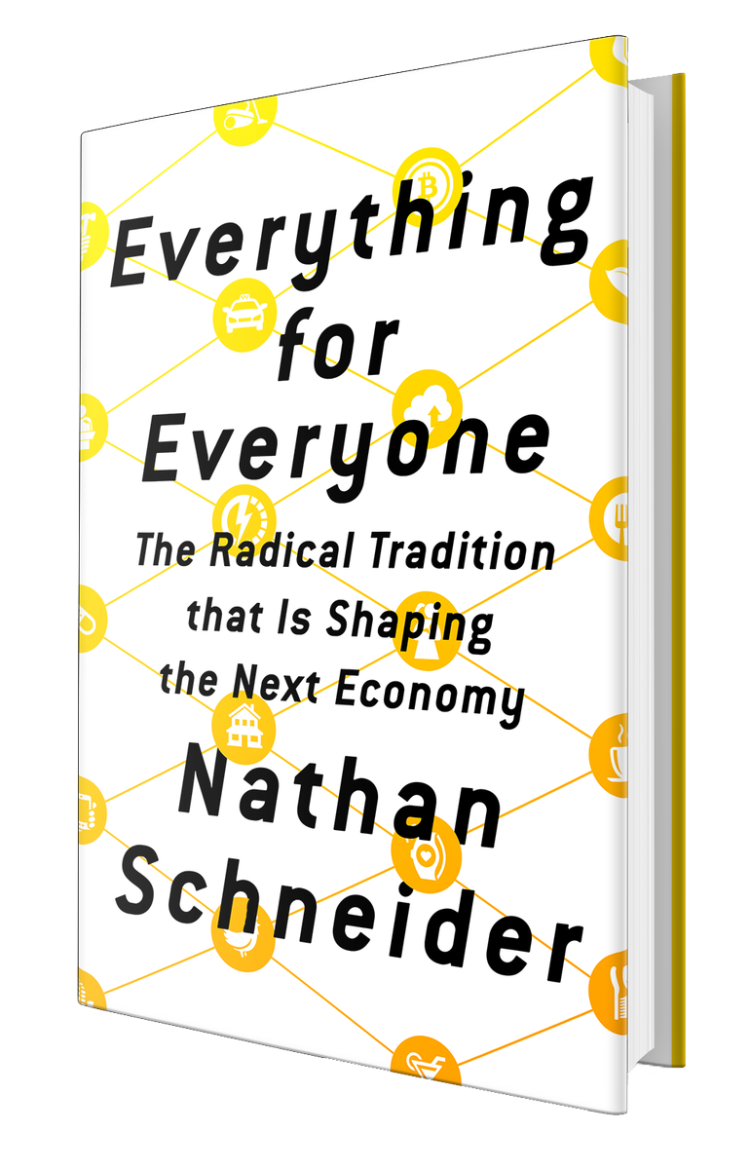 What: Book launch events for Everything for Everyone: The Radical Tradition That Is Shaping the Next Economy

For more dates and locations, visit the official website.