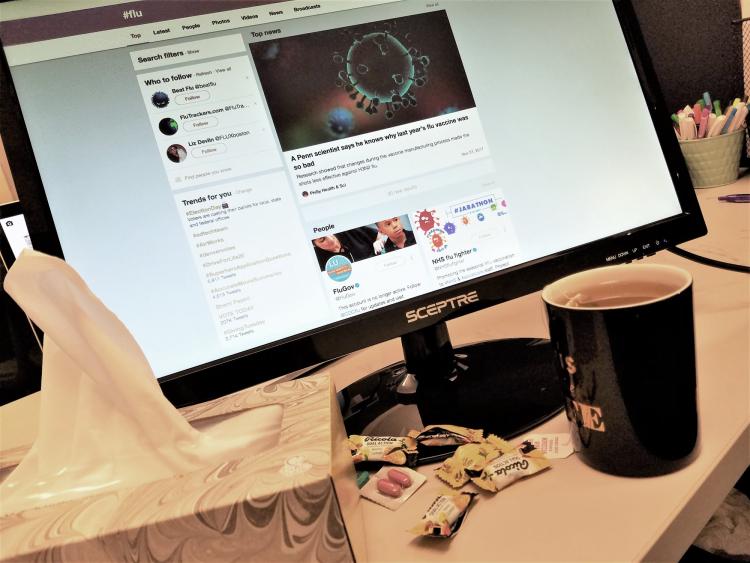 Search the hash tag “flu” on Twitter and you’ll find a free-flowing stream of comments from people across the country. In 140 characters or fewer, they offer threads of information about their symptoms, how long they’ve been sick, whether they received a flu shot, and more.

While these tweets may seem inconsequential on their own, they collectively weave together a vast quilt of information not only about who is sick, where and when, but also about how people think and behave throughout flu season.

For researchers like Michael Paul, author of the new book Social Monitoring for Public Health, this type of social media-based data represents a massive opportunity to better monitor, understand and carry out public health.

“If you think of social media as people sharing things in their everyday lives, then social media data is helpful for understanding how those everyday things intersect with people’s health,” said Paul, who is an assistant professor of information science at CU Boulder.

In 2010, when Paul and his co-author, Johns Hopkins University Associate Professor Mark Dredze, first considered the possibility of mining social media for data, Twitter was only four years old. The two wondered if people ever discussed health issues on the platform, which led them to write a paper outlining the ideas that have driven much of their work since.

“The work is taken a lot more seriously now,” Paul said. “It’s not just this niche thing in the computer science community. It is being picked up by actual public health practitioners.”

Government entities like the Center for Disease Control and Prevention do a good job of tracking infectious diseases like influenza, but researchers can forecast diseases even faster using social media data, the authors note.

“Official monitoring by government health agencies is delayed by at least one to two weeks,” Paul and Dredze write in their book. “So social media has been used as a real-time supplementary source of monitoring.”

With an infectious disease like the flu, an extra week or two can make a big difference for health agencies. If an outbreak is severe, agencies may need that time to increase hospital staffing, alert or close schools and advertise vaccination programs, the authors write. In some areas around the globe, like South Africa, data from Twitter can beat traditional forecasting methods by more than a month.

“I think it’s had the most impact on disease surveillance and forecasting like the flu,” Paul said of social media data.

However, he sees broader prospects for the field in the future, especially when it comes to understanding and monitoring mental health.

Sites like Twitter and Reddit offer users a particular combination of visibility and anonymity. People who may fear judgment or embarrassment when speaking with doctors, psychologists or loved ones can sometimes more comfortably discuss illness, depression, anger or any other sentiment with a community of strangers online.

As research develops, Paul believes social media data will be most useful in understanding these types of mental health issues and in creating and assessing public health campaigns.

“All the things people share about what they’re doing or thinking—that they don’t tell their doctors but still affect their health—are things that social media will help us understand,” he said.