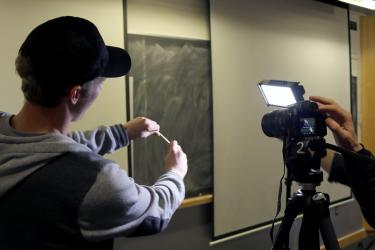 On March 4, students from CMCI and across the university gathered in the ATLAS BTU ("Blow Things Up") Lab for a workshop on high-speed cameras and post-production. Instructed by Pat Clark, a visiting assitant professor in the Department of Critical Media Practices, and Josh Krohn, an award-winning filmmaker and NASA imaging specialist, students popped balloons, smashed old computers and plucked slinkies, all while filming with high-speed cameras.  In the afternoon, students moved their footage onto computers and learned how to edit the footage for optimal display.

Read more about the workshop in an article in The Daily Camera.

Watch a selection of footage shot by the students below: